VIFF: The Florida Project or how I learned to stop worrying and love the r/Floridaman 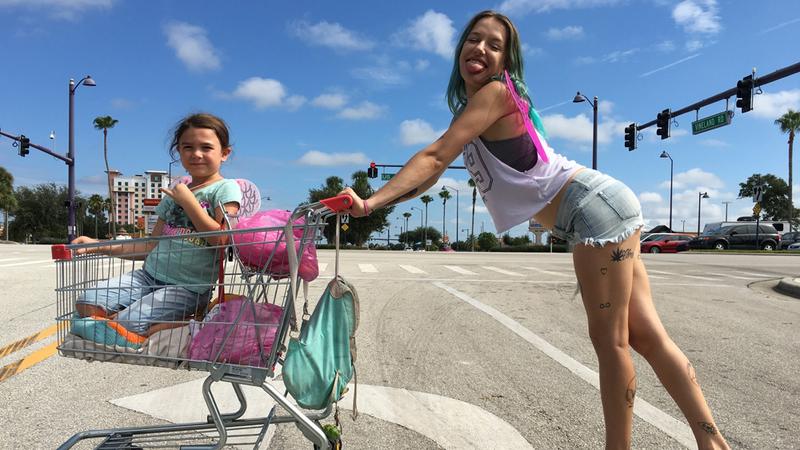 Two years ago, Sean Baker broke out of the indie scene into the mainstream spotlight with Tangerine; a dirty, abrasive and hilarious quest through the streets of West Hollywood’s red-light district. Starring two transgender women, made on a shoe string budget and shot on an iPhone 5, Tangerine faced an uphill battle. Yet through a combination of its insane characters and breakneck pace, it angrily shoved and slapped its way into our collective consciousness. We laughed, gawked and eventually empathized with people whose lives sheltered suburbanite white boys like myself could never imagine.

Now, with a new 35mm camera, a gaudy motel monstrosity to serve as his playground and Willem Dafoe as his champion of the human spirit, Sean Baker has pivoted to a more accessible and universal story – a day in the life a little girl.

His new film The Florida Project, is set in Kissimmee, among the dilapidated motels that your parents double booked at the last minute for your trip to Disney World. We are introduced to our protagonist Moonee (Brooklyn Prince), a precocious six year-old girl, as she stomps around town with her friend Scooty (Christopher Rivera). Both are devilish pranksters on the prowl: they spit on people’s cars, cop money for ice cream and flip off passing helicopters with adorable irreverence.

Even when they get caught as they do during the aforementioned spitting, they use it as an opportunity to make new friends with the owner’s shy daughter Jancy (Valeria Cotto), who joins them on future adventures and learns how to be a sassy street kid in her own right.

Whereas Tangerine was a day-long, jealousy-fuelled rampage across West Hollywood, The Florida Project is more like a slow but steady odyssey through childhood; an adventure where every day there’s someplace new to explore and have fun.

In Tangerine, the camera follows our protagonist, whose strutting down the street is accentuated by speeding drone shots, creating a fast-paced cinematic verve. But in The Florida Project, the camera is often times locked and set. Gorgeous wide shots and slow-moving pans layer the movie, immersing the audience in this poverty-stricken tropical environment. We absorb the sumptuous yellow of the sun and the vibrant purple of the pauper’s palace our characters call home.

There is no real plot, only a series of vignettes and changing relationships. Such structureless storytelling is difficult to pull off but Baker nails it. I doubt everyone will be suited to this slice-of-life style, but in my mind there was not a wasted scene. The movie glides by and feels realistic in ways that are truly rare today. The motels, shops and attractions of Kissimmee’s lower class feel like a living, breathing ecosystem, constantly swapping in new arrivals while others do their laundry or hang things to dry on the railing outside their room.

Still, despite all the beauty and fun to be had, the harsher reality of these kids’ lives is ever-present. The threat of their unsupervised antics and obliviousness to the adult world had me constantly alternating between laughing and holding my breath out of fear. Fights break out outside Moonee’s room, suspected pedophiles are run off the lot and Moonee’s mother Halley (Bria Vinaite) struggles to pay rent.

Young, trashy, head-strong and vindictive, Halley’s most redeeming quality is her undeniable love for her daughter, even if she does let her run wild in way that would cause my own mom to have a heart attack. She spends her days avoiding security while she hocks cheap perfume outside hotels. At night, she takes selfies with Moonee until her daughter inevitably falls asleep.

Then there’s Bobby, the stern but caring manager, played by Willem Dafoe. Bobby’s been around, seen every manner of people pass through his motel – enough to know that Halley isn’t good news. Still, he gives her breaks when rents due and is a constant presence throughout the film.

All of the performances are done with organic love and energy; even with Dafoe, the film’s most recognizable face, I only saw the characters, never the actors.

Ultimately, The Florida Project culminates in a simultaneously heartbreaking and nail-biting climax that somehow manages to be both a homage and a middle finger to Francois Truffaut’s The 400 Blows. It’s a must-see film from one of the best working directors today.