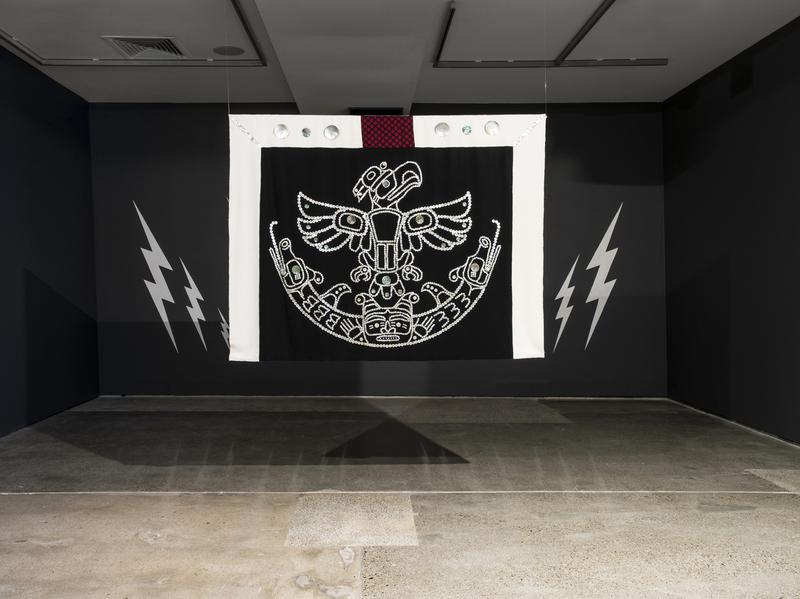 So you walk into the Vancouver Art Gallery and see a dinner table. What?

It’s all laid out for dinner too. There’s a blue velvet tablecloth and beaded napkins, handmade ceramic dishes with wooden spoons. Chandeliers! And the wallpaper: pigs and machetes, fish and coconuts, all on a light green background.

It’s beautiful. But why is a dining table in an art gallery? No one is here to eat. What does a table mean in a gallery setting?

“Hākari as guests” by BC Collective (Cora-Allan Wickliffe and Daniel Twiss) and Louisa Afoa is just one piece in the Vancouver Art Gallery’s recent exhibit, Transits and Returns, that questions the relationship between context and art.

This third iteration of Transits and Returns showcases the works of 21 Indigenous artists from around the Pacific, ranging from local First Nations to Alutiiq territory in the North, Māori lands in the South and the many mainland and island Nations in between. Two prior showings were held in Brisbane and Auckland. The works explore themes of movement, territory, kinship and representation.

When I was nine, there was this Dairy Queen I would walk
to with my friends. It was not a special Dairy Queen. I simply loved it because I loved my friends. However, after I left for university and came back, it was not the same place. It felt smaller, dingier. My leaving and returning — my transits and returns — changed the place itself, or at least my perception of it.

Of course, Transits and Returns is about a lot more than a nostalgic look back at a random DQ. It is ambitious and moving, with a broad range of artworks.

There are multicoloured woven sculptures embroidered with fish scales and bright fabrics draped over almost-human shapes. There is a table, tapestries, a neon sign and a whole wall of t-shirts. There is a beaded family crest and an animation of the story behind it. There’s an entire office workstation set up — desk, Mac and all — where you listen to voicemails left on the phone. There’s a coyote skull dressed with beaded moccasins and a dollar on the floor next to it.

That last part isn’t a joke. The dollar is there.

On first glance, I wasn’t sure if someone had dropped it or if it was actually part of the installation. But, sure enough, it was listed as a material on the placard for “I Bind You Nancy” by Natalie Ball: one American dollar bill.

The more I think about it, the more ingenious it gets. Using American currency distinguishes it from being someone’s dropped cash, both in Vancouver and Australia. The only trip-up was me; because I was raised in the United States, I have a different ingrained context of what currencies the people around me might be carrying. The contexts I brought to the gallery changed how I interacted with the artwork.

That’s the thing about Transits and Returns — there are a lot of contexts at play. More noticeably, not all of them are explained. There is a reason for the lack of explanation, which is not mentioned in the exhibition, but was brought up by one of the curators: politics of refusal.

The politics of refusal is a concept developed by Kahnawà:ke Mohawk Political Anthropologist Audra Simpson. Roughly, it refers to a refusal from Indigenous peoples to provide context, explanation or justification for their culture or history, because
of course, who is always societally pressured to do so? Indigenous people. By refusing, the labour of historical context is placed on the onlooker, instead of upon those who normally have to perform it.

Was going to Transits and Returns comfortable? Not always.

Was it understandable? Not always — and that’s okay.

After the tour, I went into a small, dark room in the back corner of the exhibition, where a three-channel animated video had just ended. (Later, I would find out this was Ahilapalapa Rands’s “Lift Off.”) There were no benches,

so I stood and waited for them to repeat. One channel showed the Kumu Hula — the master teacher of Hula — drumming, while the other two played a panoramic photo of the Mauna Kea Observatories beginning to bounce along to the beat until they eventually explode.

The Kumu Hula was hand- drawn, while the Mauna Kea Observatories were photo-edited. The wall next to the door was covered in shimmering blue- and- silver tinsel that looked like waves. There was a sense of solemnity and irreverence I didn’t quite know how to parse. But the longer I stood there in the dark, the more I understood.

Sometimes, you don’t need to know the intimate details of someone else’s experiences to understand. You just have to make space for them and listen.

Transits and Returns will be at the Vancouver Art Gallery until February 23, 2020.