Twelve Days of Completely Secular Yuletide: The Muppet Christmas Carol is creepier than it has any right to be 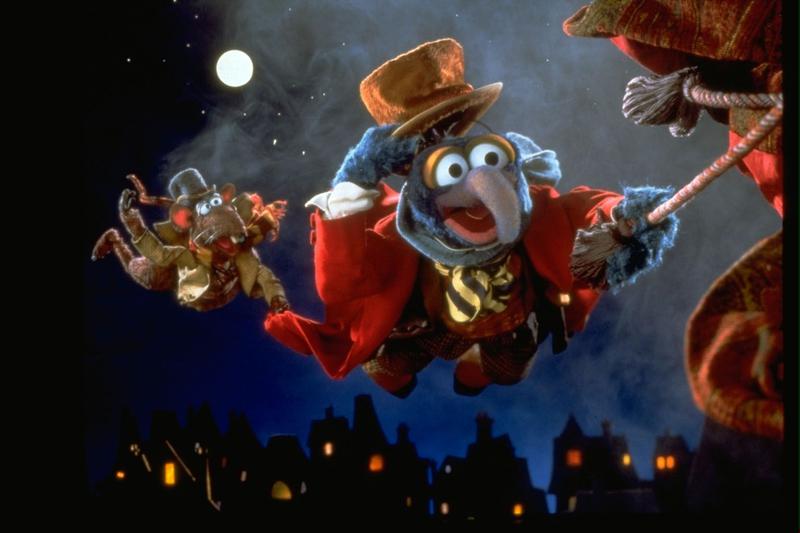 Despite the silly puppets and jingly musical numbers, The Muppet Christmas Carol is surprisingly bleak. IMDb

The amount you enjoy The Muppet Christmas Carol (1992) depends on how endearing you find the Muppets and on your level of Christmas spirit. I have an abundance of one of those, and none of the other. Hint: I am Jewish, and Kermit the Frog was my first crush.

On rewatch, the surreal puppet nightmare ends up being the most compelling part. It also gave me the childhood impression that Christmas was more demonic than Halloween.

The basic story, for my fellow non-Christians, follows an exploitative banker named Ebeneezer Scrooge who hates Christmas, poor people, Muppets, poor Muppets, charities, joy and Christmas. Instead, he lives for the grind. His grind is evicting people (and muppets. Are muppets people?) onto the icy streets of London. This guy sucks!

Scrooge is played by Michael Caine, who stays admirably straight-faced for someone co-starring with a puppet. Kermit the Frog plays Scrooge’s employee Bob Cratchitt, a downtrodden yet upstanding family man struggling to pay off his mortgage. It is a terrible thought that even Muppets have to pay mortgages.

The Muppet Christmas Carol, like the 1834 original, asks an age-old question: how can workers get cold-hearted capitalists to start paying them a living wage?

The (Muppet) Christmas Carol’s age-old answer: ghosts will help, by striking fear into the heart of your evil boss. Through the course of the movie, the spirits of Christmas past, present and future whisk Scrooge on a journey to relive his childhood trauma, listen to his neighbours talk shit about him behind his back and finally, force him to attend his own funeral. (Has anyone tried this with Jeff Bezos?)

All of the ghosts are Muppets, and they’re unusually creepy ones. They’re meant to scare Scrooge into redistributing his wealth. As a kid, their bulging eyes, echoing voices and gnashing puppet teeth also scared the shit out of me.

We open with a soaring shot of the snow-covered roofs of Victorian London. It’s a Christmas market, bustling with people in outfits straight out of Bridgerton or Pride and Prejudice. It’s also full of small velvety gremlins. Everyone acts like this is normal.

When a Muppet comes around asking for charity for the poor, Scrooge looks up from his accounting to respond: “Are there no prisons or poorhouses where we can send them?” Again: this guy sucks.

It’s depressing that a movie from 1992, and a book from 1834, stay too real in 2021. This is a common thread through the movie: despite the silly puppets and jingly musical numbers, The Muppet Christmas Carol is surprisingly bleak.

Luckily, the ghosts of Scrooge’s deceased business partners, played by Muppet hecklers Statler and Waldorf, show up wrapped in the literal chains of hell to show Scrooge the terrifying fate that awaits him if he keeps abusing destitute muppets.

Scrooge, looking slightly fruity in his floral dressing gown, sees the ghosts and gasps, “my partners…”

Here’s where I admit that when I watched this as a child, I interpreted this as Ebeneezer Scrooge coming out as gay. As a kid, I didn’t know anything about banking (embarrassing!), but my mom had gay friends, so when I heard “partners,” I thought that meant “nice men who live together and love each other” — not “evil co-owners of a muppet-exploiting bank.”

After this shocking revelation, Statler and Waldorf are dragged back to hell and Scrooge gets whisked off by another, even freakier Muppet ghost, to repent for his sins. The Ghost of Christmas Future is an eldritch horror of a Muppet with a black void for a face (which actually looks pretty cool), who literally forces him to stare at his own lonely gravestone! Maybe this should not be a children’s movie!

However, the ends justify the means, and Scrooge returns as a new man. He forgives Kermit’s debts and joins in the Christmas festivities. It’s a feel-good Christmas movie again, with some mediocre singing and puppet choreography. If you’re into wholesome holiday cheer, you’ll like at least 55 per cent of this movie. If you like that kind of thing in addition to borderline muppet psychological horror, you’ll love all of it.

The Muppet Christmas Carol teaches us that even the worst landlords are redeemable with a jolt of existential fear. And that’s what Christmas is all about… I guess!