The stories behind UBC students' pleas for climate action

On Friday September 27, UBC students walked out of class and gathered in front of the Nest in solidarity with the global climate strike. The Ubyssey caught up with some of UBC's 3,000 climate strike attendees.

On Friday, September 27, UBC students walked out of class and gathered in front of the Nest in solidarity with the Global Climate Strike. The strike is in part inspired the work of Greta Thunberg, who after hearing about the climate crisis in school at eight years old became increasingly concerned about the state of the planet. She began striking by skipping school on Fridays to sit in front of the Swedish legislature.

What started as one Scandinavian girl in front of a government building has grown into a global movement. According to Fridays For Future, there were 278 Canadian strikes this Friday including Vancouver’s Climate Strike, where an estimated 100,000 people took to the streets.

The Ubyssey caught up with some of UBC's 3,000 climate strike attendees.

‘This is the fight of our lives’ 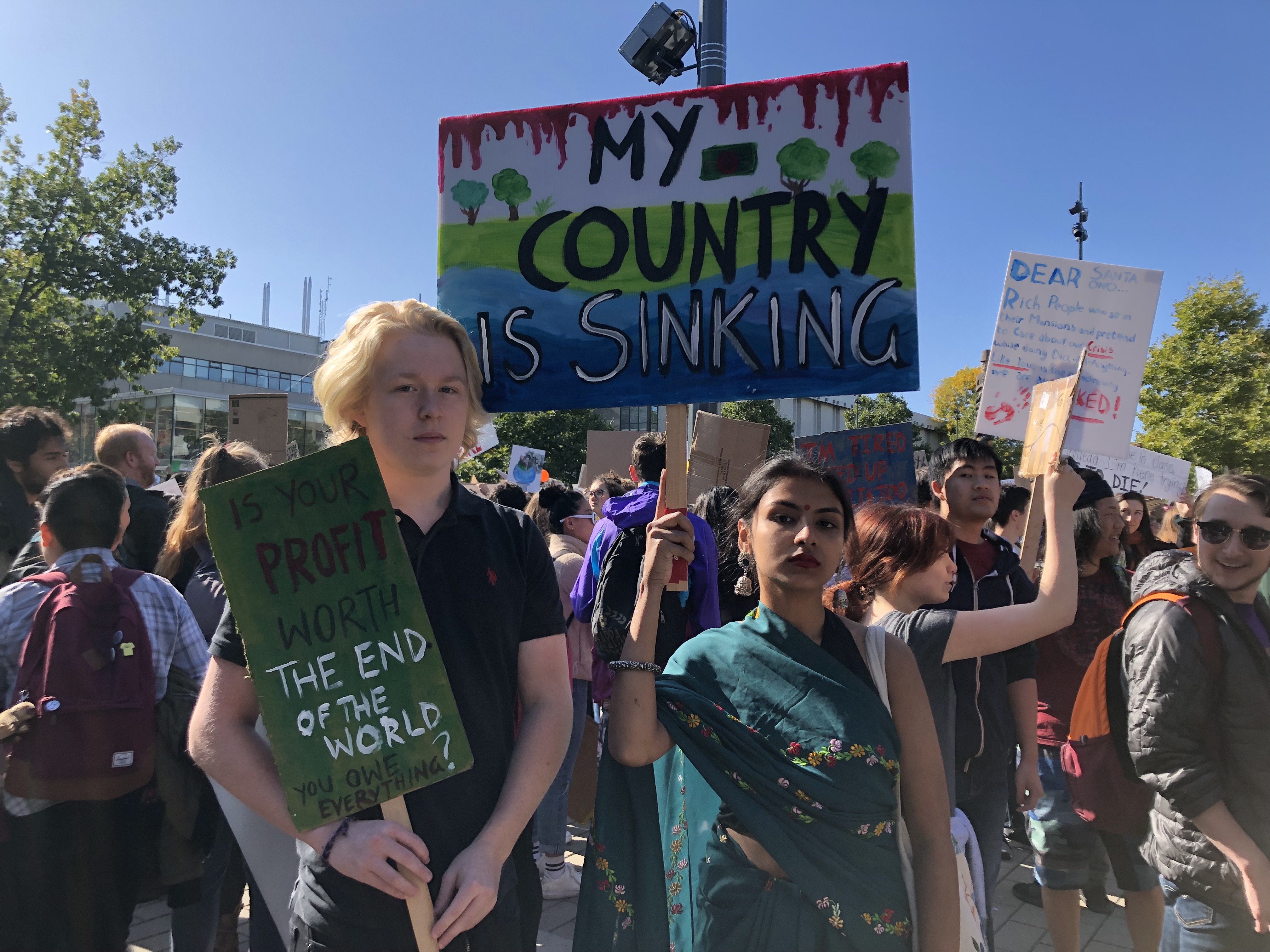 It is the Bangladesh native’s fear of rising sea levels and the overall future of her country that led her to paint signs and show up to the strike.

Matthew Seed, another protester, also wants others to know that young people are paying attention to the changes.

“As much as I think that recycling is important for the climate, I think it's a lot more important to show that as people, as a student body and as citizens of this planet that we do care and we are noticing the changes,” said Seed.

“We have so much privilege to be here and it's only responsible for us to make use of that privilege,” said Haque. 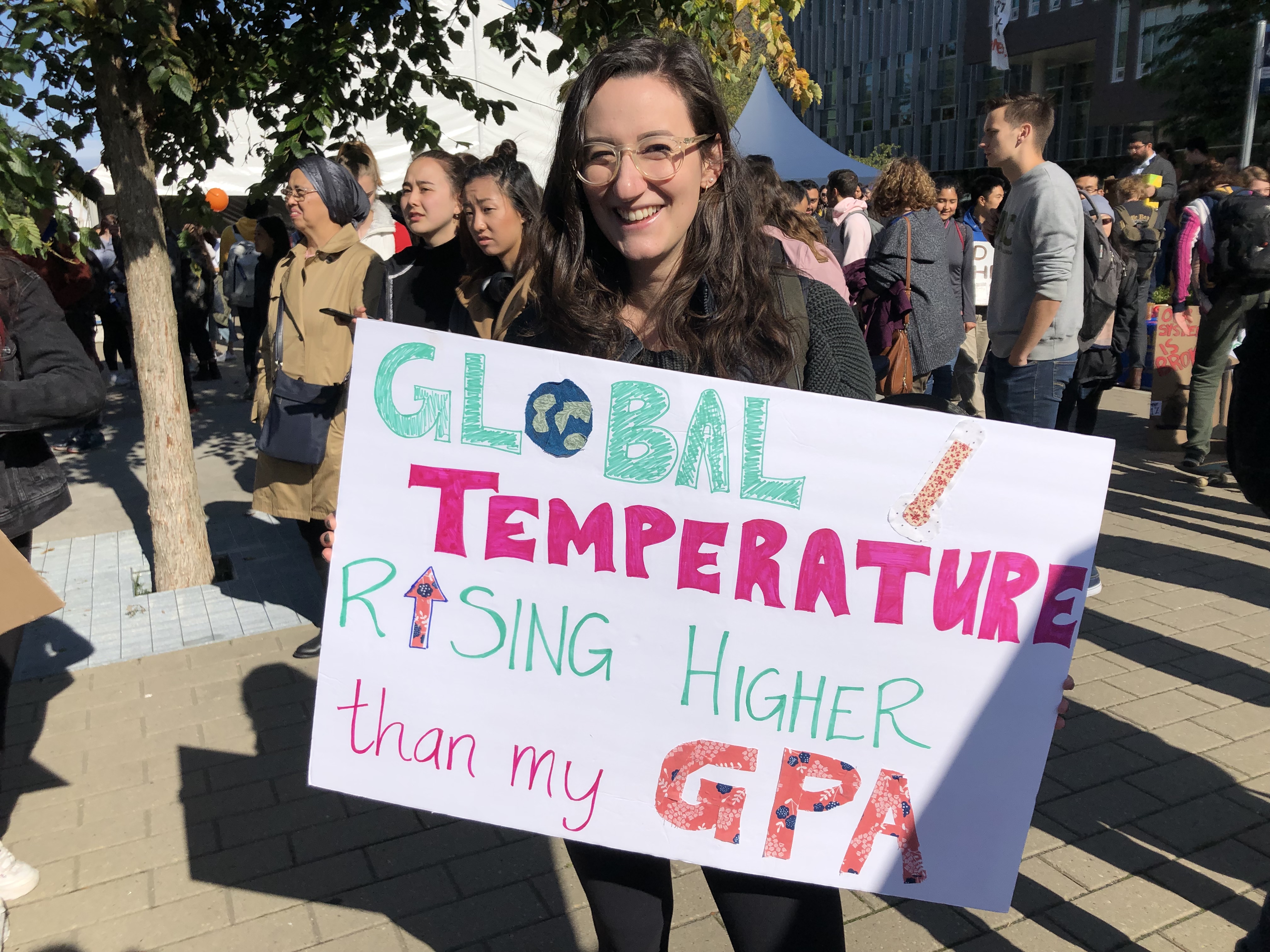 “I think it’s really important to be here,” said Bell-Etkin.

Toting a GPA pun sign, Bell-Etkin finds the most value in her physical presence over any catchy tagline.

“I think it's more about the message and showing up and being there than exactly what it says,” said Bell-Etkin.

‘Our generation focuses on memes’ 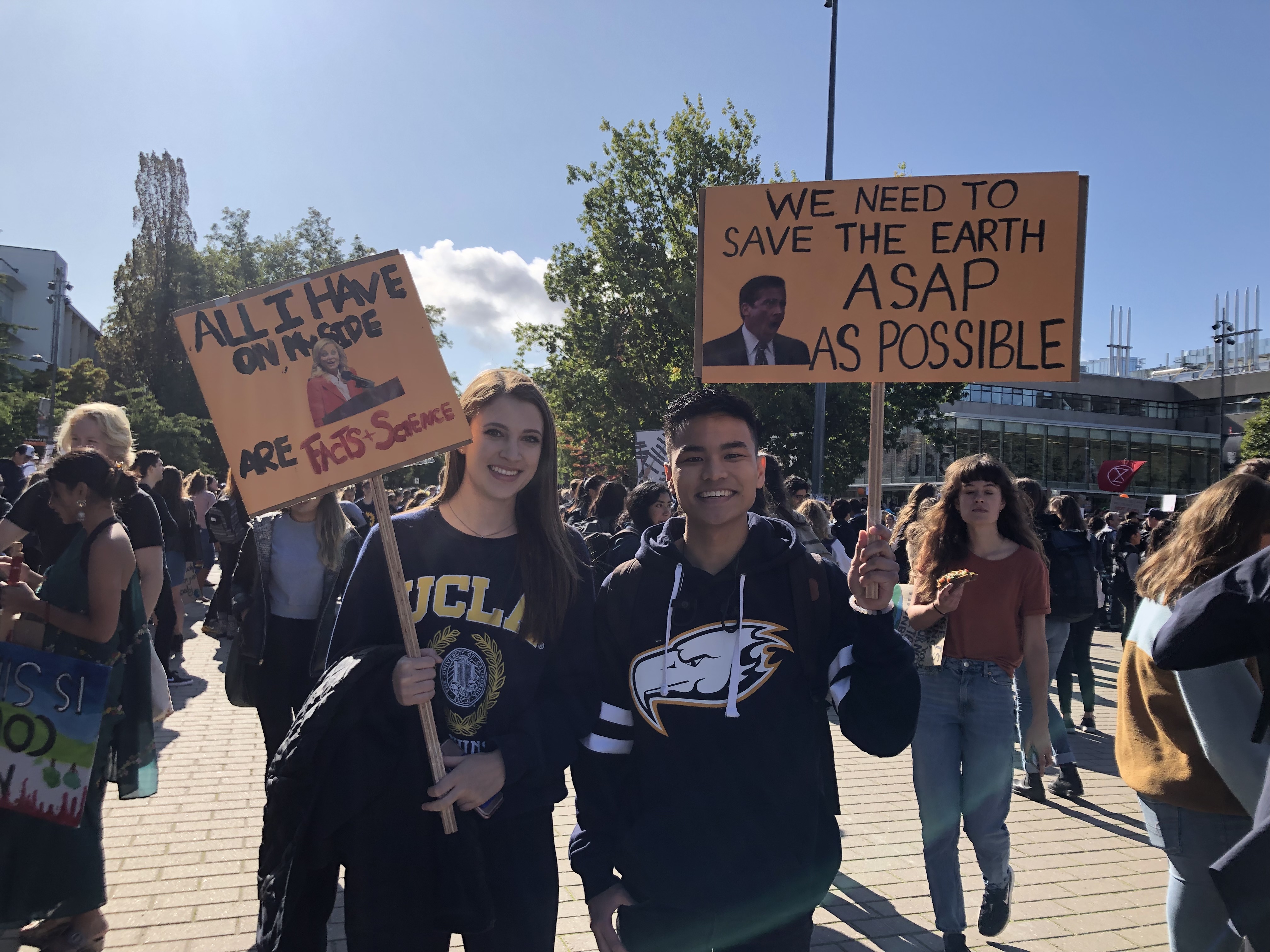 Gian Hermosura and Lisa Basil are tired of hearing people talk about climate change without tangible efforts being made.

“We just wanted to support the community. We wanted to actually come out and not just talk the talk, but walk the walk and make some change happen,” said Hermosura.

“I really feel like not enough is being done for the climate. And a lot has been talked about, but not enough action has been taken in terms of policy, so I really wanted to go out and mobilize,” said Basil.

The pair decided on The Office-themed signs so that people would look.

“This generation focuses on memes and that's how we communicate with each other, so I think these times are kind of effective,” said Basil.

“And we do need to save the earth as soon as possible,” added Hermosura. 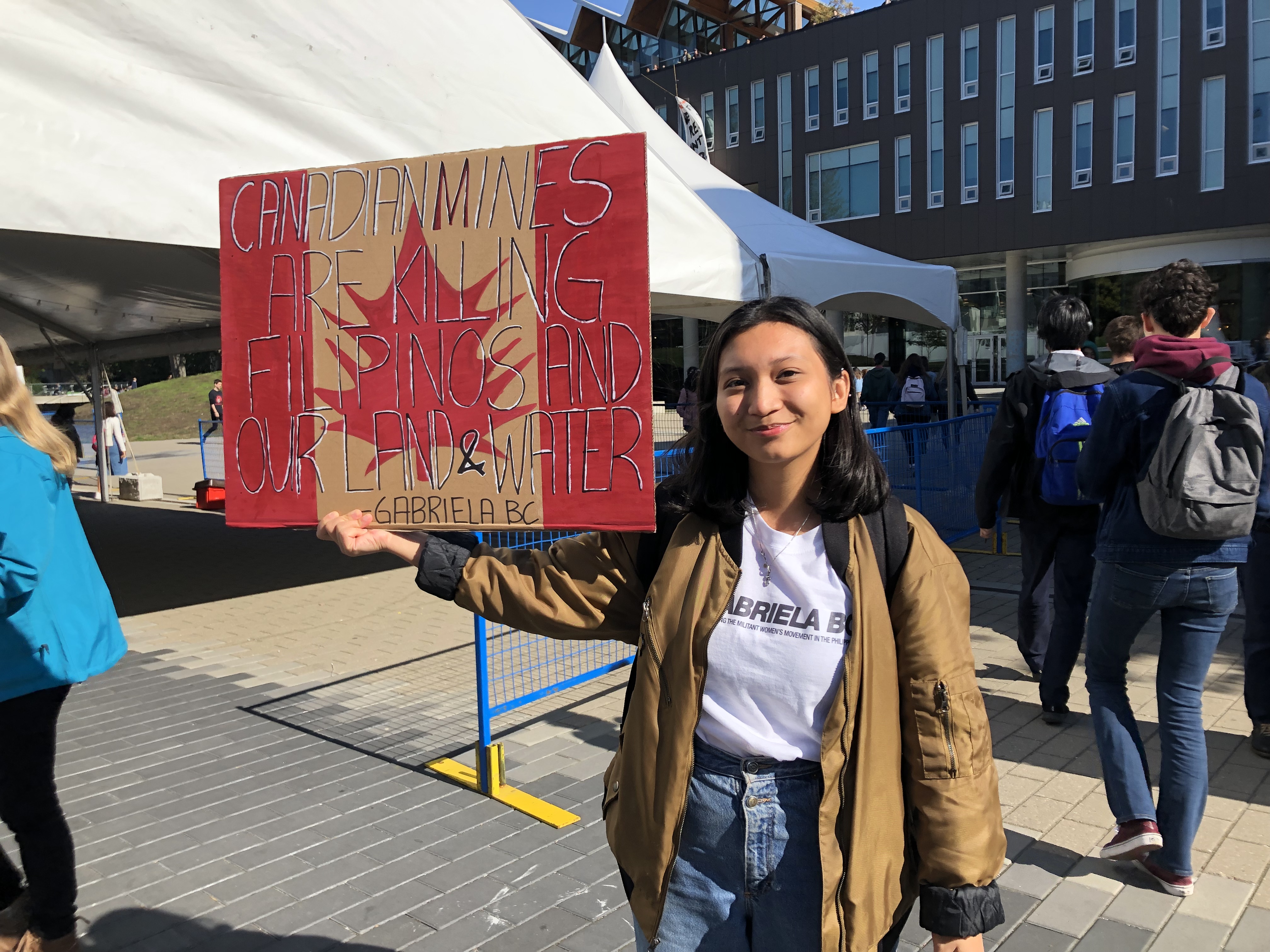 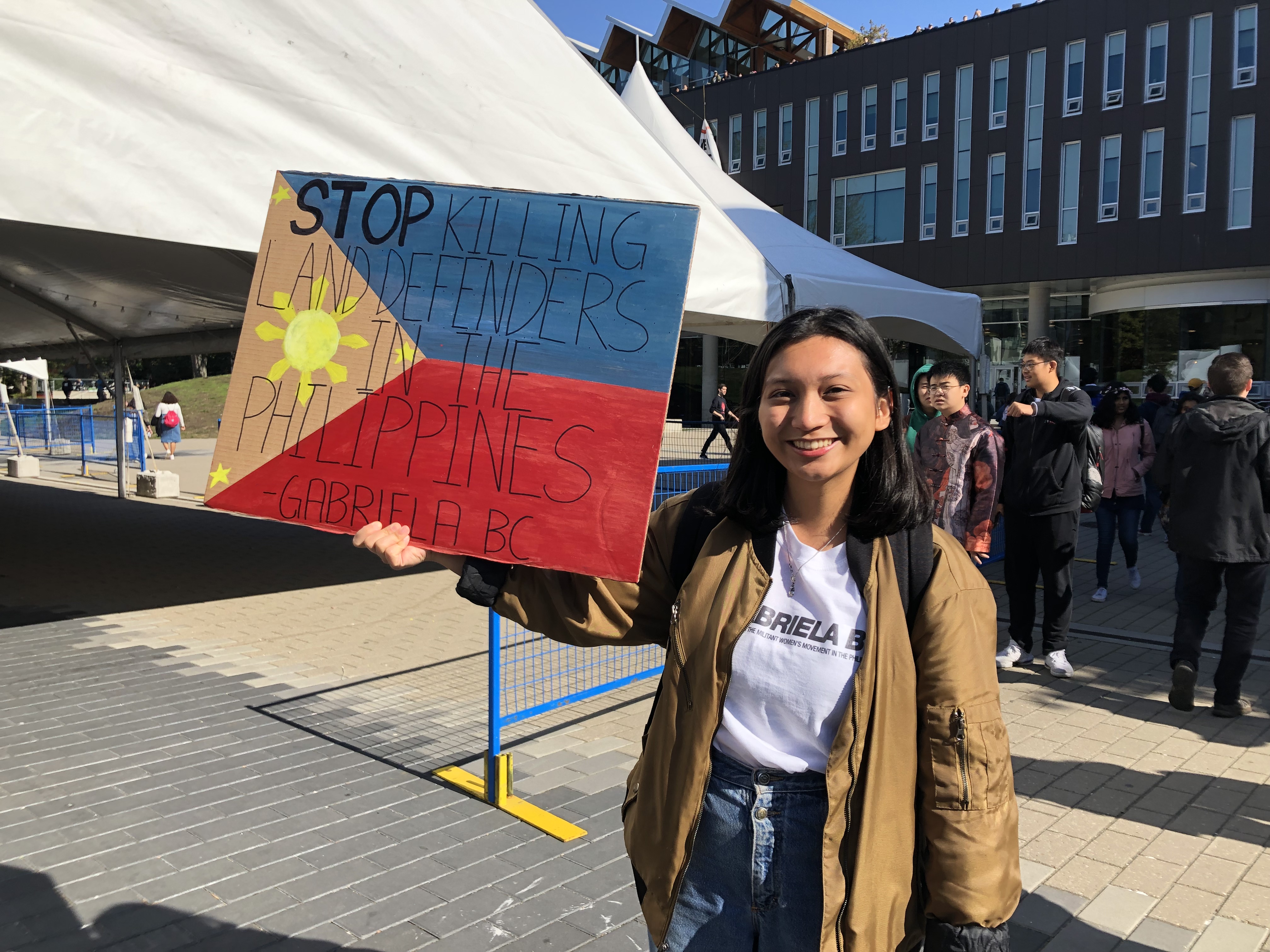 Naiah Albacia showing off each side of her sign. Bailey Martens

For Naiah Albacia, she is hoping her double-sided Filipino/Canadian flag sign will draw attention to how Canadian efforts impact foreign nations.

According to NPR, The Philippines is the most dangerous country to be an environmentalist in, and yet they experience some of the worst climate change consequences.

Albacia, who attended the rally on behalf of Gabriela BC, wants Canadians to see how their actions are hurting other nations.

“I feel like it's really striking to see the Philippines flag from afar, especially that we see [in] a lot of pictures,” said Albacia.

The Amazon is on fire 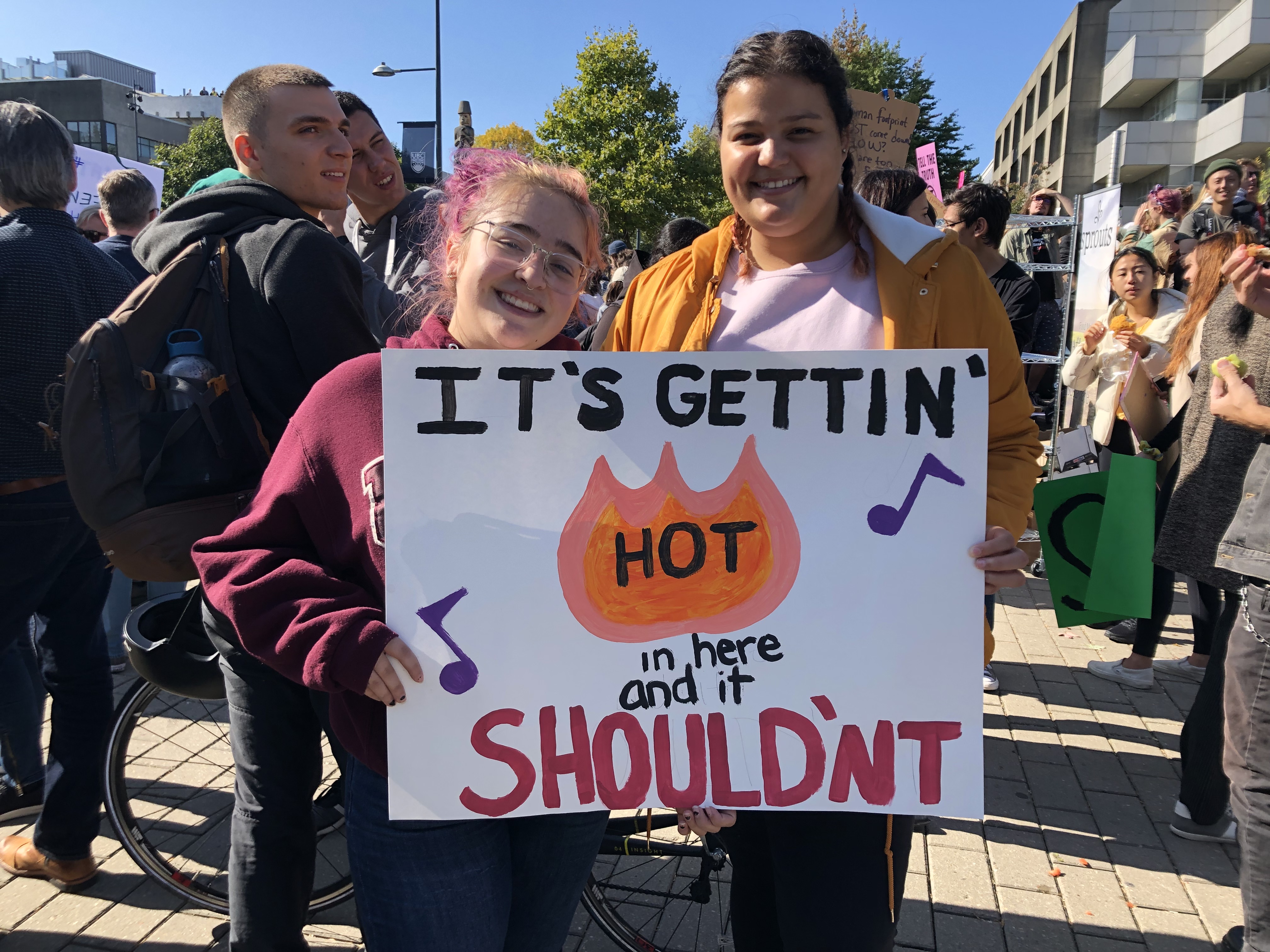 Anika Lavance-Maldomado is from the Amazon and it is on fire.

“I thought it was really important to come out and show that something really needs to change, and it needs to change right now,” said Lavance-Maldomado.

The environment is why Julia Piresleango uprooted her life in New Brunswick and headed out west.

“It was really important for me to come out and support that because it's one of the main reasons I came here in the first place,” said Piresleango.

Lavance-Maldomado was particularly moved by a group of school children, far too young to be UBC students, who attended the rally. “We're going to be the ones around to deal with the consequences of everything that's happening right now in the earth,” she added. 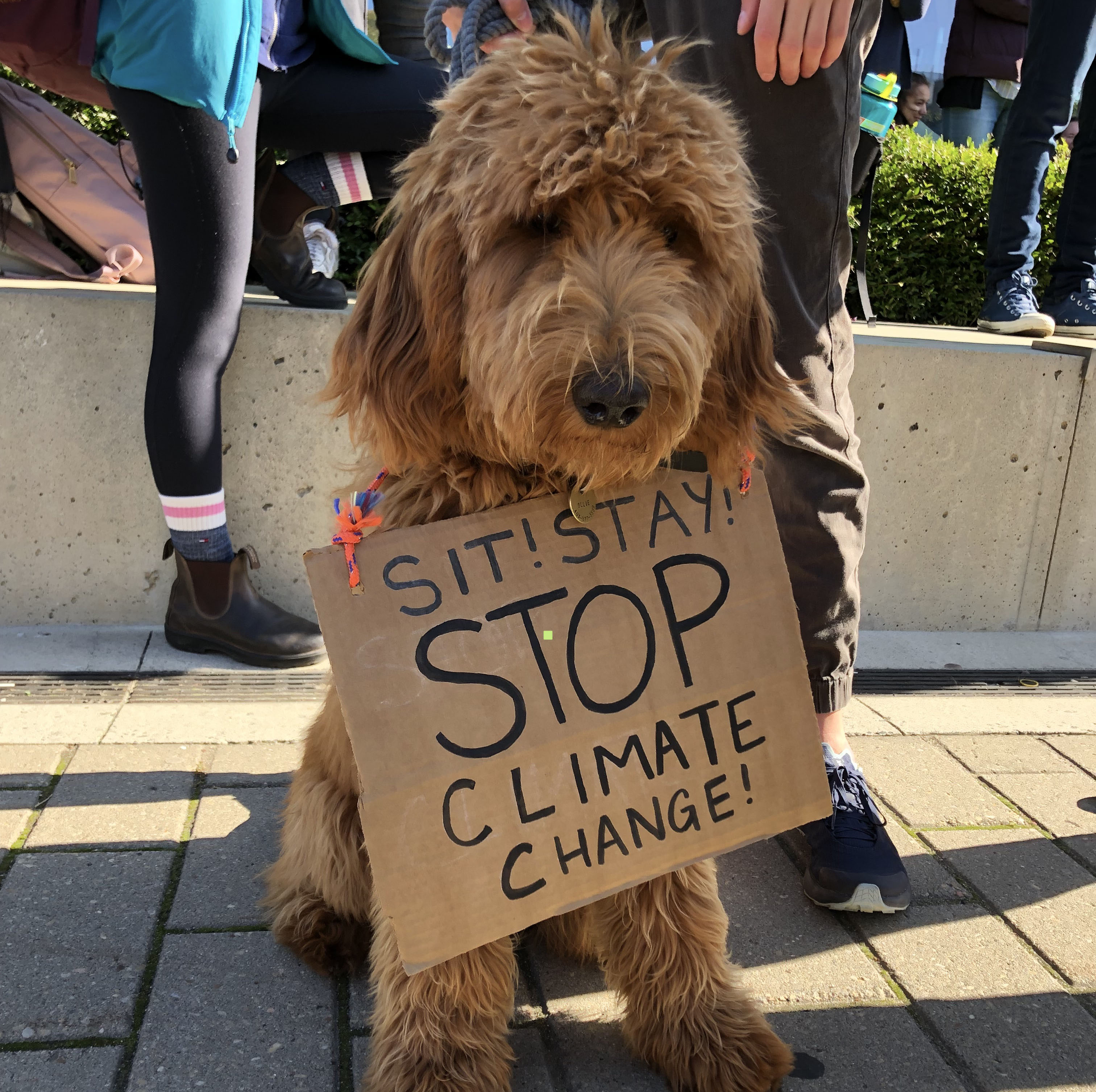 Oliver came supporting a sign around his neck while learning how to behave in crowds.

“I thought it was a good pun, but also an effective message,” said Chesley. “There were a lot of good dog options.”

The Tides Are Changing 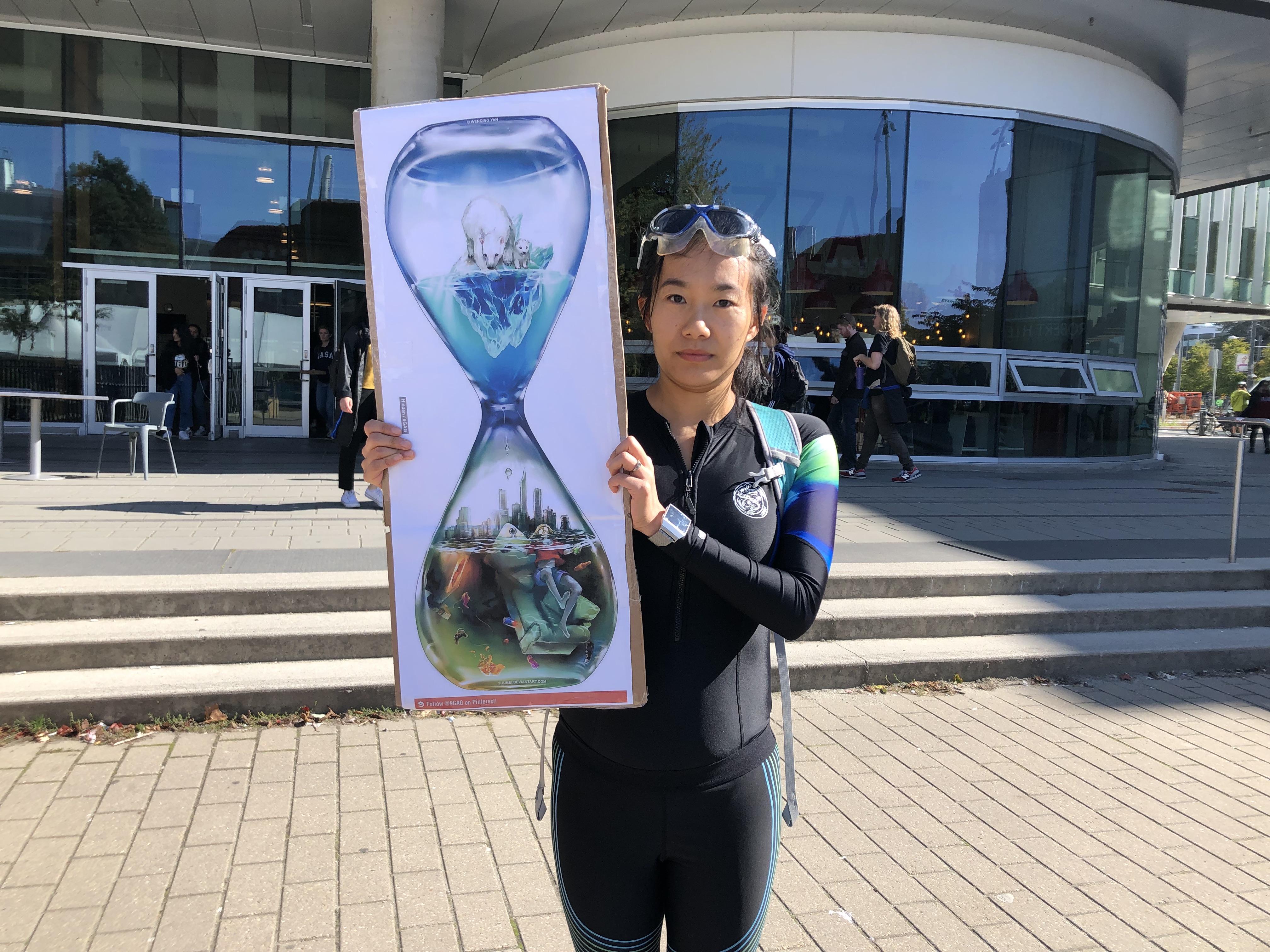 With rising sea levels, Wang wanted to make a statement that this is an urgent crisis for not only humans but all of nature as well.

This is not Wang’s first UBC climate strike. She attended last year's event and was impressed by the increased turnout this year.

“I'm feeling very hopeful that more people are paying attention than last year. Hopefully with all these synergistic efforts we can we can make great changes,” said Wang.