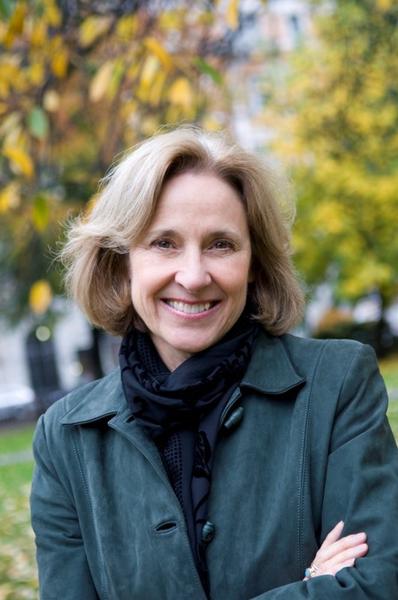 Helen Fisher is the most-cited researcher in the field of love and sex science. Courtesy UBC Connects

After an appropriate amount of grieving, one of the first thoughts that popped into my head after my girlfriend and I broke up was: Fuck, does this mean I have to get Tinder?

We’d been together for almost a year and a half, which obviously means I’d been out of the dating game for just as long, and Tinder gives me a small sense of dread, all the superficial swiping and awkwardly texted pickup lines.

But in her lecture Swipe, Right?: The Future of Romantic Relationships in the Digital Age on September 10, Dr. Helen Fisher argued that being single in a world infused with technology might not be the worst thing. In my post-breakup funk, I read the title and knew it was exactly what I needed.

The talk was the latest iteration of UBC Connects, a lecture series hosted by President Santa Ono that features high-profile speakers giving what might best be described as long-form TED Talks. Past guests include Jeremy Rifkin, Michio Kaku, Waneek Horn-Miller and Chimamanda Ngozi Adichie.

A biological anthropologist at Rutgers University and the chief scientific advisor at Match.com, Fisher is the most-cited researcher in the field of love and sex science. Her basic thesis is that, despite fears about the rise of technology and evolving marriage norms, “you can’t kill love” because it’s biologically-rooted.

Rather, Fisher thinks modern love is actually enhanced by match-making services — which makes sense because she works for one. Instead she calls them “introducing services” that jumpstart the romantic process.

Meeting someone on Tinder is not all that different from approaching a pretty face at bar, she reasoned, and once you’re face to face with someone, the instinctual patterns of flirtation are the same as they’ve always been.

“The only real algorithm is your brain,” she reassured.

Spanning many topics and factoids, Fisher’s talk seemed to have a tidbit for each audience member. I went with two friends, and all three of us left the theatre captivated by a different concept.

One friend, studying global resource systems, was fascinated by what Fisher calls “the marriage revolution,” especially its impact on women. Fisher argued that because women are more financially independent than ever, they are more willing to wait for an ideal partner and marry for love rather than financial security. The result is what Fisher refers to as “slow love,” which she believes is more healthy and enduring.

My other friend, a gay man, was charmed by the blunt — and perhaps old-fashioned — humour Fisher employed when discussing 2SLBGTQIA+ issues. Fisher only mentioned the queer dating world in passing, almost as a sidenote, because she contends her findings apply regardless of gender or sexuality.

“You know the interesting thing about gays, is that they’re exactly the same as straights!” she quipped, stirring a roar of laughter and applause from the crowd.

But this irreverence wasn’t for everyone. When Fisher guest lectured at a “Women in the Economy” class earlier that day, another friend of mine found Fisher’s rough edges off-putting. She said Fisher exuded “old white lady vibes” and wasn’t the best at relating to people of diverse backgrounds.

Halfway through the Connects talk, Fisher provided a limited-time-only link to an online questionnaire that would profile audience members’ personalities, making the lecture personal and interactive. She explained that people can be understood in four subtypes that she developed in her research and incorporated into Match.com’s successful pairing algorithm.

She claimed that understanding these personality types would benefit our relationships, romantic and otherwise, by empowering us to understand the needs of those who think differently.

But the personality tests — like a “Which Hogwarts House Do You Belong In?” Buzzfeed quiz — also gave the lecture a gossipy element. On the bus ride home, my friends and I compared the ‘expectations vs reality’ of our own personalities and proceeded to speculate the profiles of our best friends, partners and exes. It was as if we were comparing horoscopes — fun, for sure, but not exactly scientific.

For this and a number of other reasons, a slight hokey feeling permeated much of the talk. After all, despite her academic credentials, Fisher is often billed as a self-help author.

Her lecture style involves a lot of comedic one-liners, and they worked — the audience hung on her every word — but also felt rehearsed. Given her employment at Match.com, I found myself wondering how much of what she said was corporate lingo.

She also established early in the lecture that her attitude is relentlessly hopeful — perhaps too hopeful. “If you can’t tell, I’m an optimist,” she repeated throughout the talk.

It was a breath of fresh air compared to the doom and gloom of my generation about technology’s harmful demand on our attention, but also a far cry from the reserved, hair-splitting academic-speak I’ve grown accustomed to at UBC.

For a hopeless romantic in the throes of lovesickness, Fisher’s message was just what I wanted to hear. But it also made me suspicious… Can my Tinder prospects really be this good?