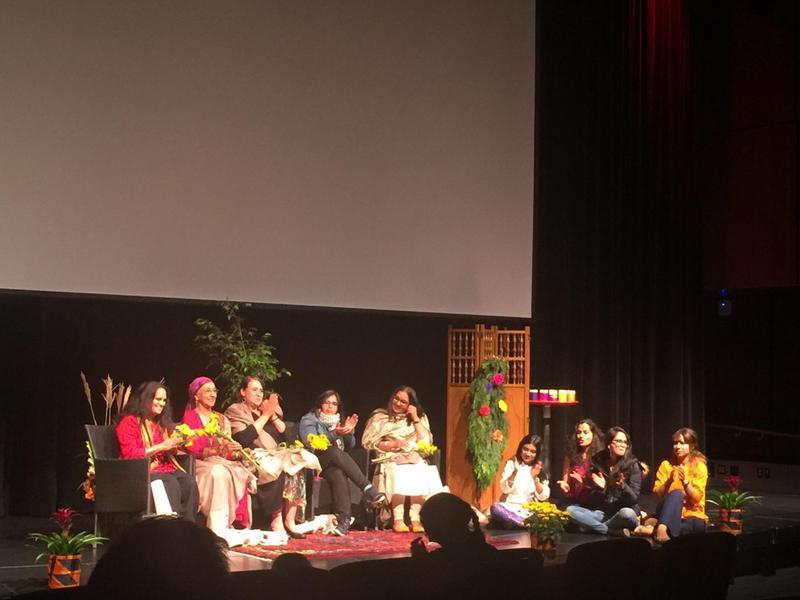 “Growing up in Saudi Arabia as a daughter of Pakistani immigrants, I experienced a culture quite different from my own… I’ve seen how culture and religion is often used against women,” reflected UBC Master of Journalism student Hina Imam. “Being a third culture kid, I experienced alienation and craved a sense of belonging — something I'm sure people living in the diaspora can relate to."

Imam, Siddiqui, and Janjua used video and stage tools to introduce some of Pakistan’s most notable feminist, queer, leftist, and anti-colonial trailblazers—from activists and human rights lawyers to poets and playwrights. The co-hosts drew links between women’s legacies in the arts and social spheres to direct and indirect political action and protest.

While the event advertised a focus on figures from Pakistan, in keeping with the anti-colonial sentiments of the event, a diversity of women heroes were celebrated — all whom shared nationalities from across the postcolonial sub-continent and it’s diaspora. Among these were community leaders including Harsha Walia who authored Undoing Border Imperialism, and has been listed as one of the most influential South-Asians in BC. She broadened the on-stage conversations to concerns over the occupation in Kashmir, as well as the continued colonial occupations on the unceded territories of Indigenous peoples in Canada.

While addressing the West’s cultural and artistic hegemony in the mainstream media, Imam referenced Pakistani artists’ refusal to restrict themselves to simply Western forms of expression and performance art — but rather highlighted noteworthy incorporations of Pakistani cultural traditions and nuances in theatre and dance for example, in efforts to bring a diversity of perspectives to global stages.

She pointed out that these contributions were even more pressing to remember and honour, considering the East is often misrepresented on the global stage.

Overall, “Women Who Named the Unnamed” prompted audience members to look beyond a single narrative when focusing on various parts of the world. While patriarchy and violence are very real issues in Pakistan and the sub-continent, the region is so much more than this. By focusing only on the most jarring front-page worthy headlines, it can be easy to lose sight of the everyday acts of resistance and strength that better characterize our communities and societies.

From the postcolonial contexts of post-partition South Asia, to the unceded and stolen lands of settler-colonies in North America, naming the lesser-known and marginalized heroes of any land can serve to curate spaces like that of Surrey’s City Hall — dedicated to transnational resilience.