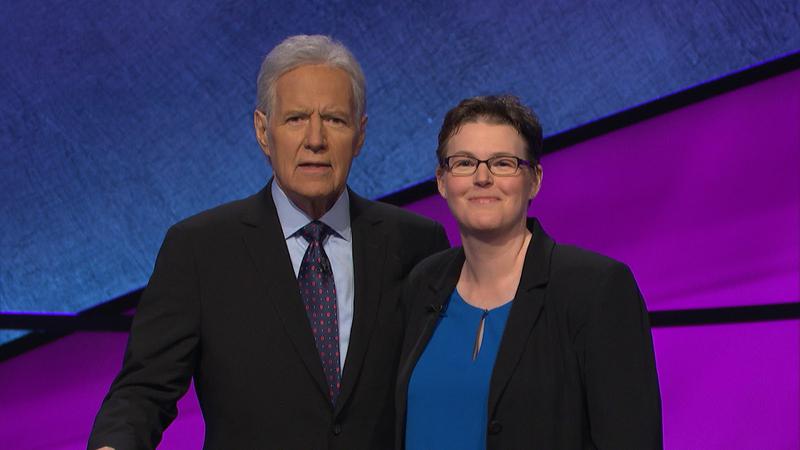 Abel noted that Trebek always stood on the same side of contestants when having his picture taken. Courtesy Jeopardy! Productions Inc

One of TV’s most popular game shows added a bit of UBC flair when it aired on July 17. Jeopardy! played host to Jennifer Abel, a second-year masters of library and information studies student at the UBC iSchool.

Abel first applied to take part in Jeopardy! in the fall of 2016. But after not hearing back, she reapplied in the spring of 2017 and was called down to California for an audition in February 2018. After sitting in the contestant pool for 18 months, she got a call that she had been selected to participate. A few weeks later she was in Culver City, California, ready to compete to be a Jeopardy! champion.

With so little time to study for Jeopardy!, classes and a job, she focused on what she believed to be the most important and where she could gain the most by studying. She also found herself out of the loop in one category.

“US presidents, state capitals and countries of the world,” said Abel. “There was a category [called] ‘There’s a new sheriff in town,’ I’m like, well, I don’t really know a lot about sheriffs.”

In the end, she got 15 questions right to 2 wrong. She was the leader after the first round and was also the only contestant to answer the Final Jeopardy correctly. She admitted that the way she knew the question to the answer was because of a lack of studying.

The Final Jeopardy answer was, “In the 1670s English author Charles Cotton built a fishing cabin on the banks of the River Dove to honor this friend & author,” to which the response was, “Who is Isaak Walton?”

“I thought, ‘Oh, I know this, because my dad gave me a copy of The Complete Angler, when I was about 11 or 12.’ I had never read [the book] all the way through, as a child. It sat on the shelf for many years and then sat in a box for many years.”

When talking about Jeopardy!’s host Alex Trebek, she noted that he always stood on the same side of contestants when having his picture taken.

“He is very much like his host persona when he’s taping shows. He’s a very sweet Canadian,” she said.

Abel’s friends and family were also thrilled that she was able to compete on a show she had been watching most of her life. She added that her mom came to see her off to the studio in her PJs and that, as of yet, she has not been recognized on the street.

“Everybody was just overwhelmed. ... Everybody was so supportive and just thought it was so much fun. And some people thought I should have won,” Abel said.

Following her experience and second place finish, she said that the experience was “awesomely surreal.”

“If they ever decide they want to have a Jeopardy! Redemption ... I’d be happy to come back and try again,” said Abel.

The print version of this article mistakenly credited the photo to Jennifer Abel instead of Jeopardy! Productions Inc. The Ubyssey regrets this error.