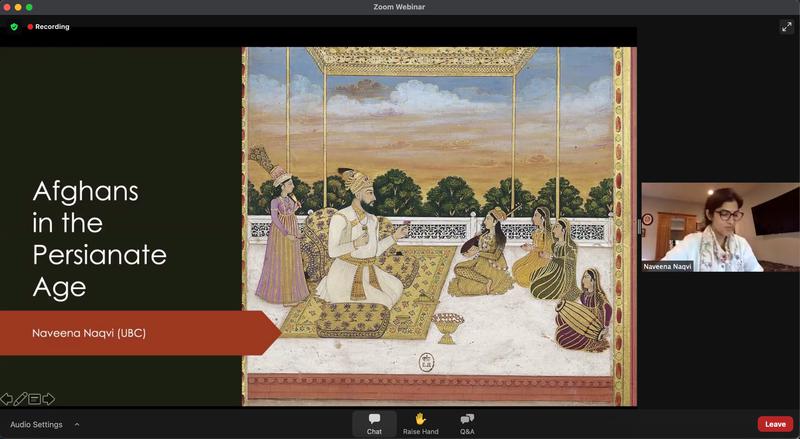 Throughout the lecture, Naqvi discussed what it meant to be an Afghan in the Persianate world. Aafreen Siddiqui

On July 24, the Alireza Ahmadian Lectures in Iranian and Persiante Studies held their last lecture for this year’s winter series virtually, over Zoom.

The series is annually hosted by the department of Asian studies and was renamed in 2019 after Alireza Ahmadian, UBC alumnus and supporter of the Asian studies department.

The lecture was titled “Afghans in the Persianate Age” and the speaker was Dr. Naveena Naqvi, an assistant professor of Persianate Islamic cultures of South Asia at UBC.

During the lecture, Naqvi analyzed the current prejudices and misconceptions about what it means to be an Afghan.

“There's been an idea that Afghanistan is a perpetually militarized society, a failed state, and is dominated by ethnic conflict and warlordism. Those three ideas did not just emerge overnight,” she said.

The Afghan peoples have historically been described through a lens of tribe and ethnicity, and Afghanistan was also known as a ‘graveyard of empires,’ as Naqvi explained.

Diving into the lecture

Throughout the lecture, Naqvi discussed what it meant to be an Afghan in the Persianate world.

The term ‘Afghanistan’ was originated in the 14th century, as mentioned in a Persian Chronicle written by Christine Nölle-Karimi, to describe one of the many locations where Genghis Khan raised his army.

After the 14th century, the term ‘Afghanistan’ was never used again, “until the conclusion of the Anglo-Persian Treaty of 1801 when, for the first time, it was used to refer to a cohesive political entity by that name,” explained Naqvi.

Afghan history before the 19th century

One perspective suggests that it was the “firm establishment of major Persian and bureaucratic empires in the early modern period, like the Safavid in Iran and the Mughals in India,” that we saw a clear attempt to delineate a genealogy of Afghan identity, said Naqvi.

For instance, during the Mughal emperor Jahangir’s reign, an Afghan nobleman asked his employee, Nimatullah Khan, “to write one of the earliest extant written narratives of Afghan ethnogenesis.”

Khan wrote the Makhzan-i-Afghani, tracing Afghan lineage back to a figure named Afghana, whose descendants were carried to Ghur, Ghazni, Kabul, Kandahar and Firouzeh.

Here, his descendants were led by Qais Abdul Rashid, and it was at this moment that the decedents of Qais formed different Afghan tribes. “The first connection between Afghan-ness and tribal identities was made in the context of this competitive service market in Mughal India,” said Naqvi.

A similar connection was seen between the Safavid empire and the Afghans. The Safavid emperor gave the Afghans land in exchange for military service. However, on the other hand, some Afghans rebelled against imperial authority as well.

This perspective shows the “sort of privileges the power that large Persian empires had as structuring forces to support, patronize, reorder and review Afghans in their orbit and determine how they were remembered,” explained Naqvi.

Naqvi concluded the lecture by saying that the term ‘Afghan’ is extremely complex and layered and it is one that is especially historically sensitive.