All Hell Is Breaking Loose, Honey is honest about the modern man and poignant after the election 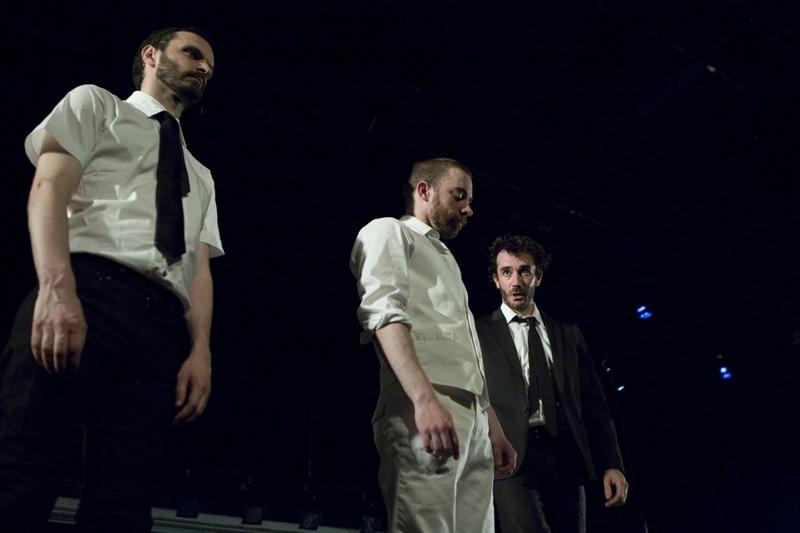 It seemed appropriate to watch a show entitled All Hell Is Breaking Loose, Honey on November 8. The performers even alluded to it in the shows introduction, stating that should a critic be in the audience and review the show negatively, at least it would be overshadowed by the looming US election. Whilst the outcome in no way overshadowed the disjointed brilliance of the piece, it filled with regret — and still does — when I look back on this production.

The election of President-Elect Donald Trump on the 8th was intrinsically informed by the nature of what we traditionally think of as “masculinity” — a notion that choreographer Frédérick Gravel critiques so forcefully. It at least sheds some clarity on why someone who displays even the slightest sense of femininity cannot be considered a potential presidential candidate by the majority of the population. Maybe if those who voted for Trump could have seen Frédérick Gravel’s creation before heading to the polling stations, they might have at least felt guiltier for doing so.

Gravel lulls us into an unassuming sense of security, speaking to us frankly and stating that the show's connections to what critics have called a “male crisis” were accidental and unintentional in the formation of the company’s show, even saying that it’s not cool enough to be considered performance art.

From the moment Gravel walks back from the mic and the lights go down, we can understand All Hell Is Breaking Loose, Honey is a show in love with division and disharmony — and it's pretty damn performance-arty if I'm being totally honest. From an exposition of men “playing cowboys” and spilling beer, to a Magic Mike-esque nude pole dancing sequence that collapsed into a noise-rock performance, the show practically embodied disharmony in all its elements. The only part I might consider traditional was a piece set to Radiohead’s “Videotape,” but this ended disharmoniously. The stage was drenched throughout the sequence in an ocean of blue — only for an artificial pink to contaminate it near the play's denouement. A performer in a tutu and Tinkerbell wings then emerged, moving with quiet tenderness. The audience were audibly affected — their laughter turned to chuckles, to gasps, then to silence, and finally, a rapturous applause.

The description of the play is a little misleading. Advertised as “half dance, one quarter performance art and one quarter rock show,” most of what we experienced were abstract dance routines and oddly choreographed fight sequences. Some of the shorter pieces appeared a bit superfluous and dragged away from the impact of the centrepieces, and the pace of the show took a while to spark before the performers fired up.

While I thought the structure of the narrative in All Hell Is Breaking Loose, Honey could do with a little extra tweaking, the sporadic nature of the dance forms and concepts forced next to one another also reflected the division and disharmony crucial to the modern masculine identity. The personal became political, just as it did when I left the theatre to a new United States president-elect and an uncertain future for hundreds of thousands of immigrants, Muslims, women, LGBTQ+ folk and more, in America and beyond. It brought me back, kicking and screaming, to the reality of modern masculinity.

The message of “Make America Great Again” ended up swaying 63 per cent of white men to vote for the president-elect, according to the general exit polls. I’ll be honest — I’m still a little confused as to what part of America they want to be made great again. Perhaps it’s the nostalgic image of the beer-swilling cowboy, John Wayne — the literal white supremacist — crossing the plains over the bodies of Indigenous peoples. Or the chiseled 80s bodybuilder, sweat dripping off his chest and never skipping leg day. Or the aggression of the punk rocker, using distortion to spew out their insecurities, cultivating the male-domineered spaces of mosh pits and dive bars. Each of these traditional masculine figures were subverted and remolded by Nicolas Cantin, Dany Desjardins, Tomas Furey and Frédérick Gravel until they resembled something sexy, terrifying, feminine, masculine, strong and vulnerable all at once. It is something complex. Something better. Something the next US president and his cronies will never be.