The 19th Annual Animation Show of Shows: A beautiful and disjointed showcase 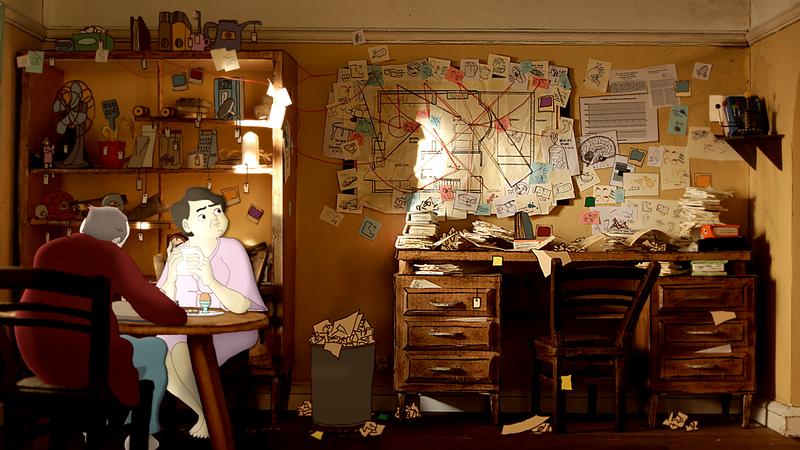 A still from the film “The Alan Dimension.” Courtesy The Animation Show of Shows

For those who wanted to see Swedish fish sing about existential crises, or Kobe Bryant transform from a child shooting socks into a trashcan to a superstar dunking in the NBA to an old lady being carried around a Japanese shopping centre by someone in a monkey costume, the 19th Animation Show of Shows at the Rio Theatre was a beautiful experience.

A showcase of animated short films from around the world, the night was both entertaining and thought-provoking. It successfully brought together visually diverse pieces that each conveys a different message and mood. The show was cohesive, and the films flowed into one another well.

The standout of the show was Niki Lindroth von Bahr’s stop-motion musical number entitled Min Börda (The Burden). The film begins at a long-stay motel, where a one-eyed fish mans the front desk and eerily sings in Swedish. English subtitles stream across the bottom of the screen, making the scene even more disjointed and unsettling.

As soon as the singing started, the theatre filled with laughter — it was unclear if this was due to the hilarity of the film or the audience’s confusion and discomfort. Monkeys, rats, dogs and fish all sing about their daily toils, and the climax is when all the creatures collectively plead for the burden of life to be lifted from their shoulders. The ending is surprising and provocative; and when combined with the unearthly music and anthropomorphic animals, it helped to make this film one of the most memorable in the collection.

The other significant piece was in some ways the opposite of The Burden. The Hangman by Paul Julian and Les Goldman was released in 1964 and restored for the show. Whereas Lindroth von Bahr’s work leaves the viewer unsure of what conclusion to draw, The Hangman has an obvious moral lesson against fearing differences and shirking personal responsibility. This film was a relevant reminder of what has happened in the past and what continues to happen today.

Unfortunately, the two Canadian pieces, Alexanne Desrosiers’s Les Abeilles Domestiques (Domestic Bees) and Elise Simard’s Beautiful Like Elsewhere, got lost in the power of the other films.

Desrosiers’s short is close to being fascinating, but it seems like a puzzle that was given insufficient time to solve. While described as a science fiction film, Simard’s work lacks any sort of narrative and does not warrant the label, despite it being gorgeous to watch on the big screen.

The entire show was thought-provoking in the moment — however, after researching each piece, it is clear that there is much more meaning in the works than can be digested in a single seating. This was the show’s failing. As there was rarely any context provided about the artists’ visions or the history of the films, viewers lacked the context and time that is required to truly appreciate each film’s message and depth.

Despite this, the 19th Animated Show of Shows is a stimulating collection that allows people to freely interpret art and discover their own meanings. Out of the 16 films, only a few are disappointing. Works such as The Battle of San Romano, Everything and The Alan Dimension each bring something unique to the show, whether it is philosophy, humour or breathtaking animation.