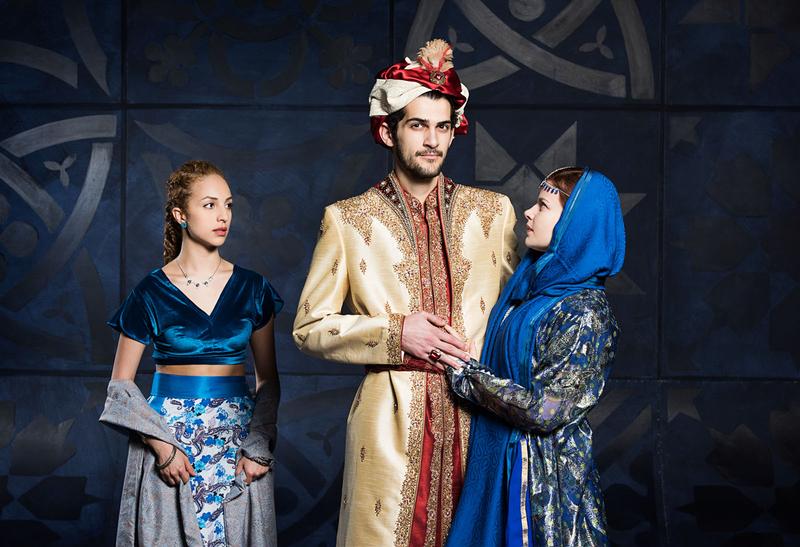 The supporting cast were standouts in UBC Theatre's final production of the year.

Sexy, humorous and beautiful, UBC’s Theatre department has undoubtedly lived up to expectations cast by Eurydice and The Tenant of Wildfell Hall with their last production of the season, Arabian Nights.

As always, the costume and scenery were enchanting — particularly important in the story of Arabian Nights which is centred on the court of the Khalifa, Shahryar (Francis Winter). At the beginning of the piece, the audience is greeted by glowing rustic lanterns against a deep purple cloth background like stars in the sky. It is these same lanterns that glitter farewell to the audience at the end of the play, framing the story like between the covers of a book.

Scheherezade (Elizabeth Willow) artfully spins her stories both for the Khalifa and the audience. Interestingly, the actors never leave the stage. Instead they paint colours on Scheherazade’s palate, allowing themselves to me manipulated by her words.

When called upon to play a role, they act out her stories. When absent from a scene, they sit around the periphery of the stage and participate through performing music or whispering lines to those in the main action as a group.

This use of voice and sound was a strong point in the production. Exotic music placed the production in Arabia and the use of dance with this music brought changes of pace to the play. Some of the singing in the production was sublime, however it was at times probably the weakest aspect of the piece as actors occasionally fidgeted from nervousness or felt off tune. This was made up for, however, by the strength of the voices together, a haunting chorus to the production.

The physical acting in the piece is superb, bringing the comedy from the plot to the production. Aspects of farce acted as a foil to the moments of terror as after many of the stories, the audience would fear for Scheherazade’s life. Playing many different roles, many of the actors aside from those playing Scheherazade and Shahryar stood out.

Mariam Barry was obviously in her element, expertly playing multiple roles and most notably that of Harun Al-Rashid. Cassandra Phillips-Grande was enchanting, artfully teasing the men around her left, right and centre. Making foolish their masculinity, she was masterfully coy. Finally, Parmiss Sehat was a standout, playing not only the sister of Scheherezade, but multiple smaller roles. She was mesmerizing in all she did and made us forget the many characters she’d portrayed over the course of the night. Every role she played felt like her first.

Finally, Riley Bugaresti had perhaps the most challenging role of all. Although many women played men over the course of the play, no gender swap was as intricate as Bugaresti’s. It takes talent to be a man playing a woman playing a man.

Bugaresti carefully switched genders over the course of the production multiple times. His finest moment perhaps was in one of the most humorous scenes of the play where he plays a blushing bride whose wedding is ruined by a farting husband. Surrounded by a chorus of, “should not have eaten those chickpeas,” and “oh what an enormous fart,” while her almost-husband runs away to India in shame, Bugaresti succeeds in looking so effeminate and so very much like a disappointed womam on the day of her marriage that one almost forgets he is not in fact a woman.

Finally, the play leaves the audience to wonder about the futures of the characters and what the end of the production truly meant. For while one wants a happy ending, amid sirens there is a sinking feeling that something ominous has been left unsaid.