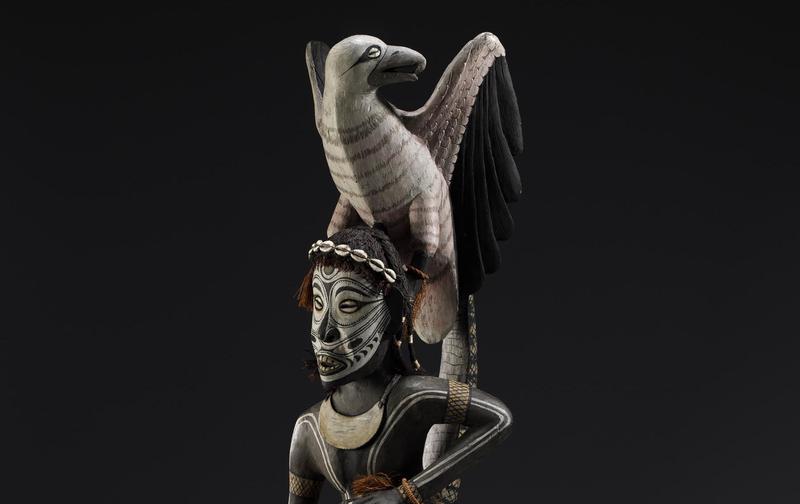 The art is attached to Papua New Guinea and the people who made them. Photo courtesy MoA

UBC Museum of Anthropology's newest exhibit, “In the Footprint of the Crocodile Man: Contemporary Art of the Sepik River, Papua New Guinea,” explores the art of the Iatmul people living along the Sepik river in Papa New Guinea, while also examining the potential environmental concerns and political tensions stemming from mining development along the water.

Running from March 1, 2016 to January 31, 2017, the exhibit is the product of almost two years of planning, research and travel. Dr. Carol Mayer, head curator at the Museum of Anthropology, has been travelling to Papua New Guinea for the past decade, but said that the exhibit really came together during her time there in August and September of 2015 alongside the designer, Skooka Broom.

“I didn’t want the art to just be put on white prints in our framework. The art is attached to the stories of the people that made them, so the illustrations are of the microenvironment — the fibres used to make up string bags, closeups of the water, that sort of thing,” she said.

The artwork itself includes the carvings of over 20 Sepik artists based on traditional myths and stories, as well as inspiration drawn from everyday life on the river that over 400, 000 people call home. The river and surrounding environment are necessary to maintain the way of life that the Iatmul people rely on and fears surrounding the results of mining development are ever-present to them.

“The exhibit has this kind of dual-fold goal which is to really get people excited about an art form that they’ve probably never seen before – I can almost guarantee they haven’t – and at the same time, recognize that the very art form which is just becoming internationally known is being made on a river where a mine is about to go in in the head waters, with all the assurances in the world that it will be fine,” Mayer added.

The Frieda Mine, which will begin excavation as the MOA exhibit opens in Vancouver, is located near Sepik headwaters and the risks associated with mine tailings entering the river have not been ignored.

In addition to voicing the concerns of the Iatmul people in regards to mining development, Mayer also contacted the mining company itself, noting that she felt it was important to represent the multifaceted layers that surround the issues. One of her goals was that no one would leave the exhibit only thinking about the art and cultural identity, but also about the political, economic and environmental ramifications of resource development — not only in Papua New Guinea, but around the world.

“The question is always, ‘How do you present these elements? Where does the museum situate itself in the complexity of art, economics and politics?’” said Mayer.