Arts of Resistance: Politics and the Past in Latin America showcases the social value of political art 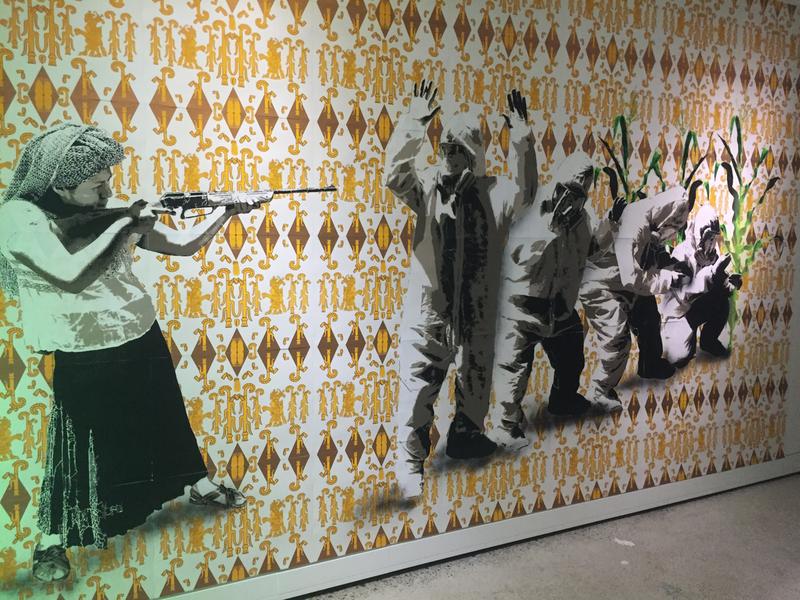 With bright colours, provocative lettering and breathtaking artwork, Arts of Resistance: Politics and the Past in Latin America tells several stories of injustice and how art has responded to and challenged them. The curator, Dr. Laura Osorio Sunnucks, spoke of the social value that art has when its political context is highlighted.

“If anything, this exhibition proves that creativity and arts and imagination are the ways that a lot of people who are disenfranchised do find healing, find strength and find solidarity,” Osorio Sunnucks explains.

The exhibit, divided into five sections, opens with a splash of yellow and a powerful title wall simulating graffiti. White sheer curtains divide the sections, drawing the audience to lines of traditional Mayan textiles, which have become a symbol of solidarity between Indigenous communities.

Tensions increase in the second section. Pieces about contemporary issues such as corruption, unresolved crimes and violent state interventions leave a lasting impression on spectators and demonstrate the weight politics have on art. One piece, an aggravating serigraph print, represents Indigenous insurgency against the genetic alteration of corn in Oaxaca, Mexico.

“It's a shame that those political contexts are often excluded [when discussing the art]. It's not about bashing the government, it's just about making clear what the contexts are,” Osorio Sunnucks explains. “It’s about a discourse.”

“One of the things I've been really pleasantly surprised by in Canada is how much First Nations communities are proud of their ancestral culture and … how much they are inserted into intellectual, creative and political fields,” Osorio Sunnucks says. “I've heard people in Indigenous communities in Mexico say that Indigenous rituals and religions are “costumbres,” just costumes, they are just “creencias,” they're just beliefs. They never used the word religion, and that is, effectively, I think a result of consistent disenfranchisement of their cultural identity and that's something obviously I'd like to see develop in many of the same ways as it has done in Canada.”

It also brings to mind the role Indigenous people have in their countries’ politics. Arts of Resistance showcases powerful voices expressed through art, however Osorio Sunnucks argues that their voices are often lacking in academic settings.

“I've always been shocked and upset by the very small number of Indigenous intellectuals,” Osorio Sunnucks explains, referring to her fields of archeology and anthropology. “These [are] people who have an enormous amount of Indigenous knowledge which, through their language and through their cultural practices, could scientifically inform research. I would say the same for politics. It's not until there are enough intellectuals running as politicians in Latin America that I think there would be the kind of support and attention paid to Indigenous issues”.

With bubblegum pink, glitter and sparkles, the fourth section presents a change in mood with a display of masks and costumes traditional of Mexican and South American carnivals. Their political context goes back to colonial times when Catholicism was violently imposed by the Spanish.

The closing installation is a beautiful mural from the Shipibo culture in Peru. The designs, called "Kené," tell a traditional story and are considered to be therapeutic art.

With the tense, harrowing themes that run through the exhibition, the colours and exhibits themselves can feel disjointed. However, Osorio Sunnucks shared that despite the mismatch of theme and mood, the exhibition gives her a sense of calm.