James Nizam Explores the Architecture of Light in Ascensions of Time 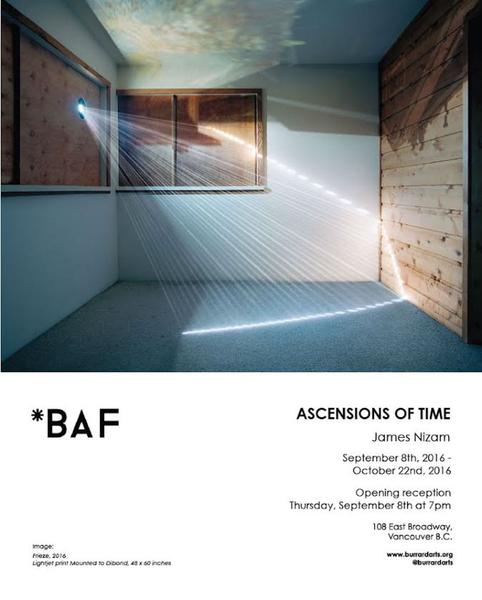 James Nizam uses light as both medium and subject in his exhibition, Ascensions of Time, through a series of photographic and architectural conceits.

Upon entering the Burrard Arts Foundation Gallery (BAF), the staff warned us not to step on a curving silver line drawn on the gallery floor. Painted with light-reflexive material, this line traced the solar movements during the fall equinox of September 22. This gesture is reminiscent of the historical monuments created to mark celestial movement and how light informs our understanding. James Nizam uses light as both medium and subject in his exhibition, Ascensions of Time, through a series of photographic and architectural conceits.

The wide range of photographic techniques in the show reveal Nizam as a versatile artist and defies the notion that a photograph captures only a single moment. Instead, Nizam’s carefully calculated photographs often rely on the passage of time, aided by his manipulations of light and architecture. We are reminded that light is instrumental in all photographic endeavours and it becomes the perfect medium in Nizam’s ruminations in time.

A BFA graduate of UBC, Nizam has since exhibited in Canada and internationally, making himself known for staging architectural interventions in order to create light sculptures. This is best exemplified in Frieze, a print tracking individual beams of light projected onto the wall and floor to create a geometric shape. Through the manipulation of space, Nizam is able to transform a gentle flood of sunlight into focused beams, ready to cut lines into the walls. Using various photographic techniques, Nizam is also able to make something as transient as light seem solid.

Solargraph (View From Studio) is a long-exposure print depicting the normally imperceptible movements of the sun. The sun leaves bright streaks of white juxtaposed against the muddy blue background of dimly illuminated architecture. Installed below the print is a “paint can-mera” — a pinhole camera fashioned out of a paint can. In its producing images for the exhibit and its explorations of time, this camera became an art object itself, recording the passage of time through oxidation and rust.

Nizam’s incorporation of antiquated photographic techniques is found throughout the exhibit. Blueprint is a cyanotype, a photographic printing process popular in the twentieth century. The cyanotype is a record of the sun’s movements through the BAF.

Negative Relief is a large set of closet doors depicting a black and white image of some shrubbery and the outside of a house. The closet doors were coated in photo-sensitive chemicals before being exposed to the projected image by a camera obscura. A piece this large would most certainly have been very difficult to create.

In juxtaposition of these alternative methods of image-making are highly saturated photographs like Glint, From Sunrise and To Sunset. These photographs reveal how dependent we are on light to reveal space and inform architecture. Nizam stresses how indebted we are to light in how it divides, illuminates and guides us through space.

Surrounded as we are by a constant bombardment of visual information, James Nizam presents to us a different way of looking — to observe what is not obvious and to ruminate in the ephemeral.

Ascensions of Time is on view at the Burrard Arts Foundation Gallery until October 22.