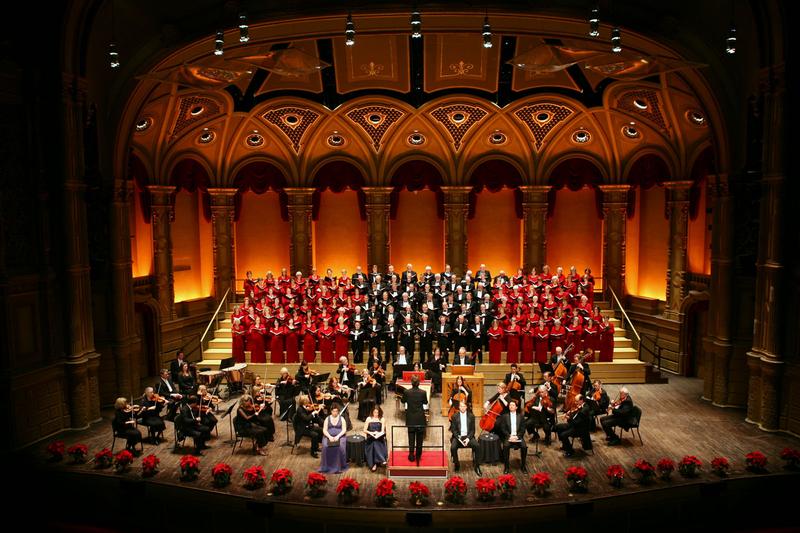 Even for those who don't celebrate Christmas, the choir's concert is an uplifting evening. Photo courtesy Vancouver Bach Choir.

Take a break from studying to spend an inspiring evening or two with the Vancouver Bach Choir this holiday season and learn that the classics don't have to be stuffy and can always evoke something new.

On December 6 and 12, the Vancouver Bach Choir will fill the Orpheum theatre with the sounds of Christmas. The first concert will consist of over 400 singers aged five and up performing traditional Christmas pieces. The second night will be a moving rendition of Handel’s classic Messiah, an operatic work about the birth, death and resurrection of Christ.

“One truly will be changed by the experience and hopefully inspired,” said Leslie Dala, director of the Vancouver Bach Choir when asked why students should spend their studying hours watching the choir. “I can almost guarantee that one will not leave the Orpheum theatre in the same way that one came in.”

Messiah, Dala's personal favourite piece to conduct this holiday season, originates from the 18th century and is widely reproduced over the holiday season. It's hard to avoid hearing the “Hallelujah” chorus at least once at this time of year, but the Vancouver Bach Choir's rendition will be anything but routine. The choir's performance will include over 100 singers, the Vancouver Symphony Orchestra and four renowned Canadian soloists: Simone Osborne (soprano), Susan Platts (mezzo-soprano), Andrew Haji (tenor) and Daniel Okulitch (baritone).

The Vancouver Bach Choir's rendition of Messiah is sure to invoke a unique emotional response for everyone, regardless of familiarity with the piece. The work follows a dramatic arch that can be interpreted differently by each group and conductor to bring it to life. Even if the audience members don't subscribe to Christianity, Dala insisted, “It's still an incredibly moving experience."

With pieces such as Christmas Cantata by Daniel Pinkham, the concert is a family event that celebrates the 85th anniversary of the Vancouver Bach Choir by continuing the beloved tradition with which it started. The multigenerational show will feature a 10 minute set of delightful, well-known "sing-a-long" Christmas carols by each individual choir, culminating in a final powerful performance all together.

Dala, a UBC alumnus, understands that studying time is precious during final season. In fact, soloist Simone Osborne and many other members of the choir are also UBC alumni, which Dala pointed out as yet another reason to come spend a few hours with them. Students get a discount for the choir's events, so experiencing a proper evening of culture costs only a little more than a movie ticket.