Before disaster strikes: How UBC’s museums and galleries consider the safety of their collections 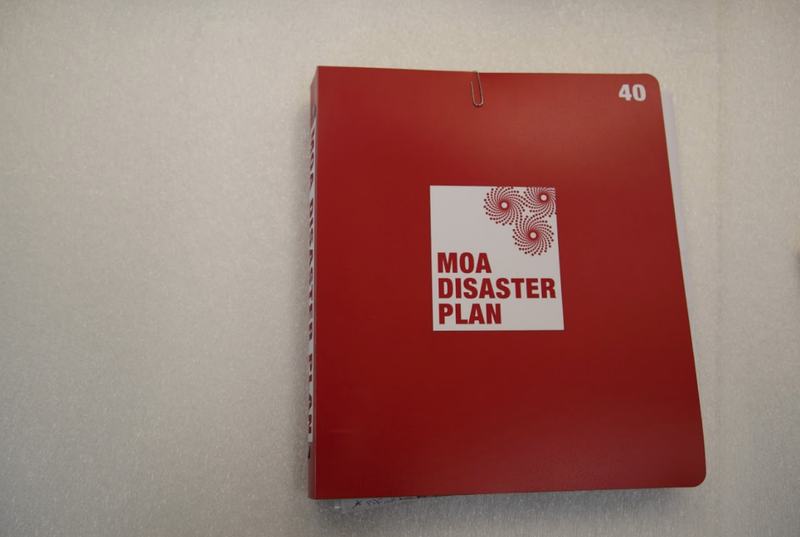 The Museum of Anthropology staff realized it was time to finalize their disaster plan after a burst pipe in 2004 led to cascading water that flooded their entrance and front lobby. Collins Maina

The last thing on your mind when visiting a museum or gallery on campus is how the items you are viewing would be protected if disaster were to strike. But after a devastating fire consumed Brazil’s oldest museum, with its archive of 20 million items almost completely destroyed, collections security is at the forefront of many conservators’ minds.

In many cases, disaster planning is an ongoing process within each of the individual galleries and museums at UBC. With vast, valuable and historically irreplaceable collections, some of the older museums on campus have opted for gradual upgrades, while those in newer buildings have pre-implemented mechanisms in place.

The Museum of Anthropology (MOA) staff realized it was time to finalize their disaster plan after a burst pipe in 2004 led to cascading water that flooded their entrance and front lobby. Heidi Swierenga, MOA senior conservator and head of collections care, management and access department, said it was a moment of reckoning where they saw how staff, volunteers and guests took on roles that were helpful and at times chaotic.

Disaster response, emergency response and salvage planning are typically things that everybody knows they need to do but can easily drop down the priority list because there’s no timeline or deadline associated with them, said Swierenga.

“It’s not until you have a big incident that you realize ‘Oh my god, we should’ve had something in place.’”

After they heard the “all clear” from the first-responders, Swierenga said her first concern was what to do with the collections. Fortunately, the gushing water had only damaged the gift shop and upper lobby by the time the pipe was turned off by building operations.

Since the event, MOA has had a comprehensive disaster plan that outlines emergency procedures and guidelines on how to salvage the collections after any kind of damage. They addressed this through role-assignments with tiers of response under the director, based on different functions. “We often run drills,” Swierenga said.

They also have a flood kit on-site, and a salvage kit provided by the BC Heritage Emergency Response Network (HERN), a small province-wide collections salvage initiative that Swierenga co-runs.

Swierenga said the MOA’s highest risk is still water damage due to its old leaky roof which was installed in the mid-1970s.

“If you go out into the great hall you’ll see things that are moved out of one of the platforms, and we’ve got buckets out there because there’s a hole in the ceiling,” she said, adding that their roof is scheduled for replacement soon.

In mid-November, MOA will also be undergoing a large seismic upgrade in its great hall to install a base isolation system which will preserve objects on a case-by-case basis in the event of an earthquake.

The Beaty Biodiversity Centre is at the opposite end of the spectrum, with a newer building that is set up to protect the collections it houses.

Structurally, the building has a fire suppression system with high-flow sprinklers and a highly sensitive smoke-detection system that can be set off if too much dust is stirred up in the collections area, said Chris Stinson, a curatorial assistant and the co-chair of the centre’s safety team.

The Beaty holds irreplaceable specimens that date back to the mid-1800s, Stinson said. So he monitors the environment ensuring that humidity, temperature and light levels are at a safe range. He also makes sure that the specimens are in their right cabinets.

The building is up to fire code since they it has around 70,000 jars of specimens stored in alcohol solution. A visitor at the Beaty may notice they have fire extinguishers on every other aisle, adding up to 52 on the collection floor.

An earthquake is the biggest risk they face, Stinson said, explaining that the all the cabinets are bolted so as to not topple over and their floor system is surrounded by a ventilation and drainage system that could quickly channel out any water and alcohol safely.

The Morris and Helen Belkin Art Gallery and the AMS Art Gallery both focus on secure storage methods to protect their collections. The Belkin stores half of their collection in an off-site commercial facility while the AMS stores the larger portion of the collection they don’t have on display in The Hatch within a secure vault that is both light- and temperature-sensitive and fire and flood proof.

In the case of an earthquake, AMS staff said that the building would be more likely to collapse around the vault, keeping the collection inside intact. The Belkin works in line with UBC Building Operations’ guidelines on safety procedures and collection storage in the case of a disaster.

The Art History and Visual Art (AHVA) Gallery is different from the other museums and galleries on campus because they do not have a permanent collection, since they mostly host symposiums and university-affiliated exhibitions, said Jeremy Jaud, their safety advisor and operations manager.

While safety considerations are somewhat individual to the different galleries and museums at UBC, the common thread is that all the facilities have their collections insured, and abide to building operations guidelines and safety codes.