Preview: Horror play Hidden takes its audience into the woods 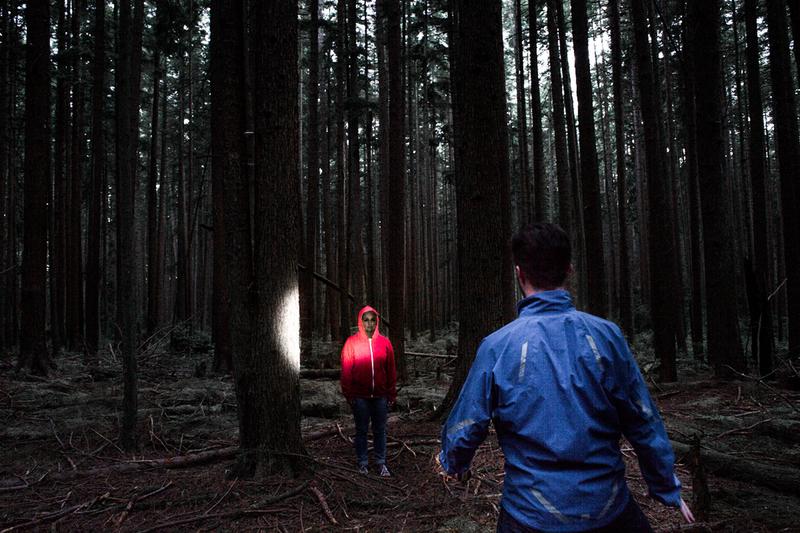 “Did you hear that?”

“Look over your shoulder. Turn on your flashlight — don’t you dare drop it.”

An atmosphere of unease and anxiety permeates every facet of Hidden, an ITSAZOO production, directed by Chelsea Haberlin and co-directed by playwright Sebastien Archibald. Hidden leads a small audience of 13 people around UBC Botanical Gardens, with the only light source coming from their flashlights to guide them.

Inspired by classic horror films, Hidden begins at the Wolf and Hound Pub and shuttles the audience to the woods where a re-enactment of a murder will take place. The play is performed in a promenade style in which the audience will be led to different venues where the next part of the plot takes place.

Developing the show required a lot of prep work. During development, director Haberlin said that the idea was for the production crew to gain experience in order to figure out what scared them, as well as what worked and what didn’t in those experiences. This involved everything from going to a cabin in the woods for several days and watching horror movies, to attending the different Halloween productions available in Vancouver — ghost tours, other Halloween promenade venues and the PNE Fright Night.

While the play does begin with the usual horror tropes — a killer in the woods, hunted university students, frightened young lovers — these tropes are quickly subverted as soon as the tour falls apart.

With theatre being dominated by drama, comedy and musicals, horror plays are not typically a genre that is often produced. Something that makes Hidden stand out from its peers as a unique experience is how integral the audience is to the entire production.

“We break down the fourth wall the entire time,” said Haberlin. “The audience is talked to directly for the entire play so they are a vital part of it. The way that they behave is part of the show.”

One of the difficulties of producing a horror play is the suspension of disbelief. “I think it’s hard for you to be scared because there’s often a separation between audience and stage that makes the audience safe,” she said. “We wanted to take away that barrier and make the audience feel vulnerable. We wanted to make them feel that they were as much in danger as the actors around them that they are watching get murdered.”

Haberlin said that one of the challenges was the fight choreography. “We’re doing it outside, in the rain and in the fall, so there’s a lot of question of actor comfort and audience safety to be attended to because it needs to feel dangerous but actually be perfectly safe.”

In order to actually produce the play, Haberlin said that finding the Botanical Gardens was kind of lucky.

“We were looking at other [venue] options and when we realized that the Botanical Gardens has the tree walk — the GreenHeart TreeWalk. We thought that it would be such a cool experience for the audience to be up on that, watching the play go out.”

As one of her goals for Hidden, Haberlin hopes that audience will be scared, thrilled and excited by the experience.