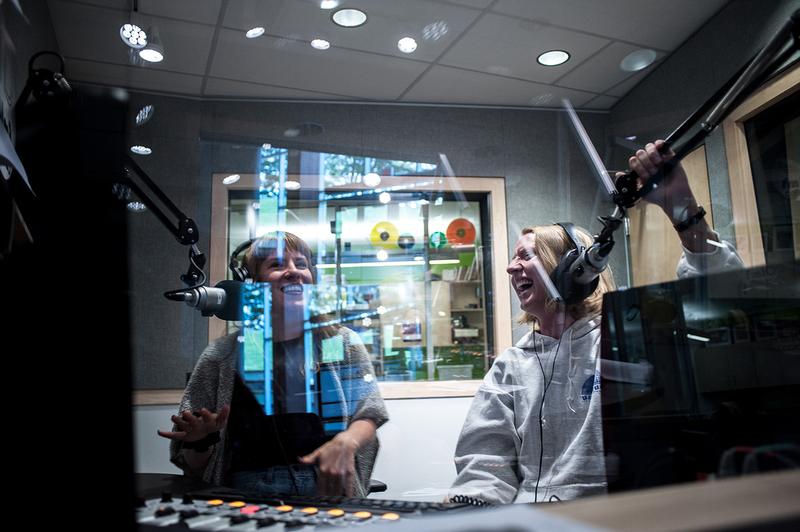 “I didn’t know what I wanted to do with it, I just wanted to be involved.”

So said Rohit Joseph, producer and writer of one of the 10 radio documentaries produced by CiTR to mark UBC’s 100-year legacy.

More than 890 reel-to-reel audio tapes from over 60 years of the Student Radio Society of UBC have been digitized over the past year, making a total of 406 hours of historic audio available to the public. These recordings include music programs, radio documentaries, campus and community news, and events broadcast on CYVR/CiTR and its affiliate stations from 1949 to the late '90s.

“A lot of the tapes we have don’t even cover a whole day of the competition, but there’s maybe only two or three hours, so you have to speak to people to really find out what was going on at that time and to really relive those memories,” he said.

CiTR celebrity interviewer Nardwuar proved to be immensely helpful in setting up meetings and contacting Joseph with CiTR alumni who were involved with the competition.

“Nardwuar is super helpful, he’s just a music nerd,” said Joseph. “He gave me the email of Adam Sloan who was one of the DJs in the competition.”

For Joseph, tracking people down was just a matter of CiTR connections — through a few degrees of separation. He ended up interviewing four people for his documentary: Terror T, Don Chow, Renny Foster and Níel Scobie.

“Vancouver doesn’t get any love for [its] hip hop scene,” said Joseph. “People have just become cynical and think that Vancouver isn’t a hip hop city. But when I came across these tapes it made me realize that actually we do have a history.”

CiTR’s DJ Sound Wars was the only competition of its kind — a unique event in not only Vancouver’s hip hop history but in the entire west coast.

“When I started listening to it I was just amazed,” said Joseph. “This was a massive competition — you can hear the cheers of hundreds of people in the background, you can hear rap groups spitting in the old-school, almost Will Smith way, but you also hear people with crazy fast rhymes, people from all over.”

In contrast, another of CiTR’s documentaries, Inclusion of the Underrepresented: The Beginning of Diverse-Ability in Media by Deepi Leihl, Dama Correch and Estephania Solis was the first documentary to air in the series, discussing the impact that production and consumption of media has on people with disabilities.

Correch, a first-year Arts student, has been involved with CiTR as soon as she arrived at UBC, volunteering and hosting her own radio show with UBC FilmSoc. She started working on the documentary after an email from Leihl, one of the co-producers looking for people to help her produce a documentary about accessibility.

“We couldn’t find any archives on accessibility initially, so we had to change the whole topic around quite a few times,” said Correch. “We ended up settling on media effects on youth, which is such a huge topic. Eventually I was able to convince Deepi [Leihl] that it was possible to keep her original idea and merge it with the new idea — so the effects of media specifically relating to disability and accessibility."

The guidelines for the documentary projects were simply to use the CiTR and UBC archives, so Correch spent time going through pages of archives finding a narrative to base their documentary on.

Leihl had already produced two radio documentaries, and was also the subject of major interviews throughout, documenting her experiences with metatropic dwarfism, an extremely rare disorder that affects skeletal development.

Like Joseph, Correch began her interviewing process before deciding on the structure, narrative or format of the documentary.

“I sat down with Deepi in a room, just asking her stuff I was curious about and knew I’d be able to find something interesting from that,” she said. “I just started working off of the archive and the questions that they were exploring and asking her questions to do with that, but also asking her questions to do with her life. Deepi has been through a lot, so we just talked about how she’s producing radio documentaries, how she has a show and is a good example of how media has helped someone with disabilities empower themselves.”

“We’re not trying to complain about how media doesn’t talk about people with accessibility,” she continued. “It’s supposed to be about how people with disabilities can still do so much.”

In total, the documentary is almost an hour long. Correch had 40 minutes of interview time with Leihl and 20 minutes with the two producers of the All Access Pass show — two students at UBC who have shows about accessibility.

“It has to be interesting and relevant — especially relevant,” said Correch. “I was talking to Deepi and the interview went on for so long because I’m so interested in her life so I talked to her a lot, but I had to go in and savagely cut out these huge blocks of things that were very interesting but they just don’t fit in the documentary.”

The documentary series is a non-academic history of UBC, with topics ranging from the Thunderbirds to sexism in the 1980s to the peace movement.

All ten documentaries are all available in podcast form at citr.ca/citrdocs.