Clubs: Agapé Street Missions and students reach out to the homeless 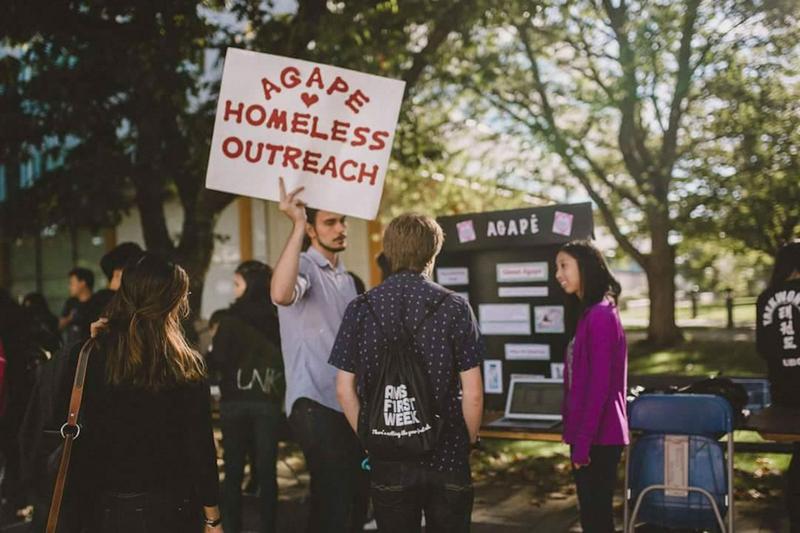 UBC Agapé Street Missions is not a new club on campus. Through the years, it has sought to bring awareness of UBC students to the tremendous and growing problem of homelessness in Vancouver. Agapé — which means “unconditional love” in Greek — is about reaching out to the homeless people and connecting with them on a more personal level. That is why the club's president, Aliana Carlos, is so passionate about it.

“You actually get to go out there and see the impact that you make on someone's day or someone’s life.” said Carlos. “There’s actually that one guy — I think his name is Lionel — and we always see him every Mondays and Fridays. Sometimes he’s just like, ‘Oh! You guys weren’t here last Friday!’ He’ll remember that we come out Mondays and Fridays, and that’s awesome.”

UBC Agapé Street Missions is a 100 per cent student-run club. As a club, every month they organize different activities such as sandwich making with their partner, the Directions Youth Service Centre, in downtown Vancouver. Once a year, Agapé also organizes a conference inviting speakers to raise awareness to the problem of homelessness.

Their main outreach missions are their “outings.” These happen twice a week on Mondays and Fridays, and are times during which the volunteers walk around the downtown west-side and give out granola bars, Ensure drinks and socks. The socks were actually a recent idea of Agapé.

But the donations are not solely what makes Agapé's outings so special — Carlos describes them more as an icebreaker. “By supplying [the homeless] with food, or a drink or clothes, we’re able to communicate with them, talk with them and ask how their day was. Just break down the stigma of why they are there.”

Carlos is well aware of the many bad representations the homeless community often has to deal with. She points out that what is being repeated in the media and the public at large — about the homeless population being drug addicts and alcoholics — is not the only perspective to be had on the issue. “There are also some people out there that have a bad past [and they] come out here because they have nowhere else to go. I think a lot of the stories that impact me the most are the youth that are out there,” she said.

Carlos admits that it can be a little intimidating or difficult to reach out to the people. But fear not, UBC students! Agapé is well prepared. Firstly, they have two planned routes through the west-side that group leaders get to pick, according to the number of volunteers who show up to the outing. Secondly, you are never left alone to accomplish the outreach mission. As Carlos said, “We’re always sticking as a group, just for safety reasons [...] If there’s not three people, then we cancel the outing. We don’t want to put people in a position where something might happen.” The club also provides insights to its members as to what questions you might want to ask and what questions might be more delicate. However, for the president, it's definitely worth it. “You get to hear their side of the story,” she said.

Agapé is convinced that their activities can have a great impact on the community. Not only does it give the homeless people that they connect with the ability to share their story, but the outings also have an impact on the students that volunteer.

“When you talk to these people, you just feel so grateful for every little thing that you have because they’re struggling just to get by, day by day. It’s a good experience, I think. It’s a humbling experience,” said Carlos.

UBC Agapé Street Missions does not seek to change the world in one day, but the club does cherish its mission to connect with the homeless people of Vancouver's west-end and to raise awareness of UBC students. Carlos feels that, when studying at a prestigious school such as UBC, “you start to forget that there are people out there that are struggling. Just going out there and being able to see and make a connection with them raises awareness about the problem that is growing in downtown.”

“You just see how grateful they are just even for a little piece of granola bar. They’re so appreciative of anything that you give them. It brightens their day up,” said Carlos. “It impacts your day as well, because then you feel like you just made that person’s day a little bit better by either hearing their story out or by giving them a little bit of something that they needed.”

Check out the club's Facebook page or their website for more information on their events and on the different ways you can get involved.