Comics in Transit showing commuters where their neighbours are from 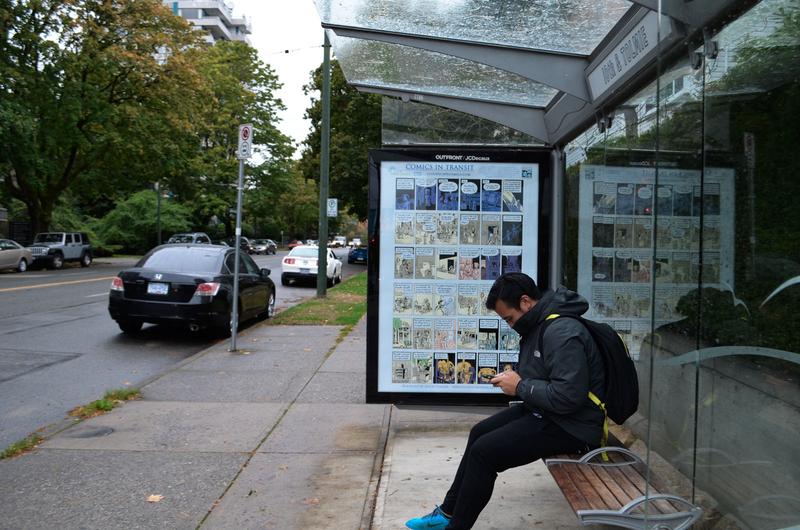 Comics in Transit are representing cities around the globe. Photo Aiken Lao / The Ubyssey.

Most of what you hear about TransLink are complaints about late buses, crowded rush hours and people eating rancid takeaways on their commute. However, since 2011 a program has been in place allowing artists and non-profit organizations to benefit from advertising space on buses and at stops. Last year, local writers published short poems on popular bus lines. This year, Cloudscape Comics have partnered with TransLink to produce 20 one-page comics positioned around Metro Vancouver on bus shelters.

“I contacted 20 different artists, all of whom had a relationship with Cloudscape [Comics] in the past, and commissioned them to do me a one-page story based on cities around the world,” he said. “One of the things I wanted to convey is that Vancouver is a very multicultural society and when you’re here you see that a lot.”

Nina Matsumotos is one of the artists whose work is featured in the project. Contributing to Cloudscape Comics anthologies in the past, she was approached to submit a panel for Comics in Transit. Matsumotos’s comic is light on text and takes inspiration from Japanese trains.

“[The phrase] is used to thank you for your efforts, especially at the end of the day because you worked hard and that’s admirable,” said Matsumotos. “That’s all it says. I wanted to keep my comic short, simple and light on text.”

“What I wanted to do is -- because so many of the artists I work with are from different parts of the world but have decided to call B.C. home -- I challenged them,” he said. “I said to write a story about a city that you like or have had some experience with.... Hopefully when people read these at the bus stops they’ll maybe learn a little something from their neighbours, where they’re from... and maybe start to know about who they’re waiting for the bus with.”

Each comic documents city life all around the globe -- from Vancouver to Guadalajara. The project includes both fiction and non-fiction stories, and their genres and styles are varied -- there are comedy comics, tragic comics, abstract comics and political commentary.

McTavish-Wisden has been writing and sketching comics since he can remember, but had been looking for a means to share his passion since beginning his contemporary art program at SFU.

“I was just looking and thinking of ways I could get comic panels or comic pages out of the book format.... I’m always thinking of ways to sort of shake up how people see comics and where they see them,” he said. “It seemed to me that I needed to find a way to show these comics and protect them from vandalism -- for the most part anyways -- and reach as many people as possible.”