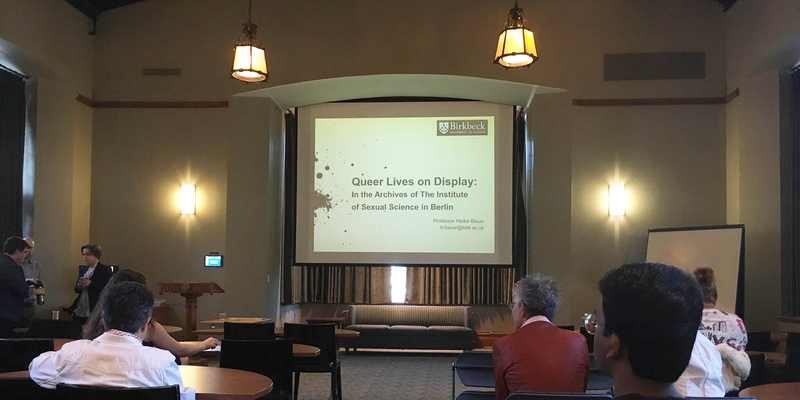 The central thesis of Bauer’s talk was on “what it means to archives the lives of people who don’t fit with in norms.” Angela O'Donnell

In a featured talk for Congress 2019, Professor of Modern Literature and Cultural History at Birkbeck, University of London Heike Bauer explored the life and archive of German physician Magnus Hirschfeld and his institute of sexuality. The talk was in promotion of the Rare Books and Special Collections Congress exhibit, A Queer Century, 1869-1969: A Rare Books Exhibition.

While the crux of Queer Lives on Display: In the Archives of The Institute of Sexual Science in Berlin was on Hirschfeld and his life, the central thesis of Bauer’s talk was on “what it means to archives the lives of people who don’t fit with in norms.”

Bauer applied these forms of evidence to discuss the “politics of putting lives on display” in the context of the The Institute of Sexual Science in Berlin and the work of Hirschfeld. The Institute of Sexual Science in Berlin — which studied the lives and bodies of LGBTQ people — operated officially between 1919 to 1933, before the institute and its work was burned to the ground by the Nazis.

Though the institute did groundbreaking work, it also had its biases, according to Bauer. The institute focused mostly on homosexuality between men and gender issues, leaving out homosexual women. He emphasized the institute’s focus on upper-class LGBTQ experiences, noting that the “working class rarely leave a footprint” in archival systems.

To add a Vancouver connection, Bauer included in the talk an anecdote on Hirschfeld’s lover Tao Li, who lived in Vancouver in the later years of his life, and his personal effects including include many private letters to Hirschfeld that were found in a box outside his apartment.

Bauer ended her talk by asking the audience to reflect on “what is at stake in archiving,” considering what can be lost in crises and what we chose to save in the first place.

As we move in to Pride month, the talk brought up some interesting questions. As we take the month to reflect on queer histories, it’s important to think on what identities and stories we deem as important enough to tell and who we prioritize when we tell those stories. To think on what we're really holding on to when we archive.