The Coastal First Nations Dance Festival is beautiful and necessary 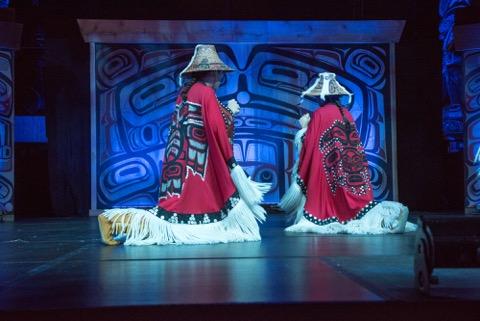 “We saw, in looking back, the importance of having a place for people to gather and share in artistic practices.” Courtesy Murray Paterson Marketing

Reconciliation efforts between the government and Indigenous nations still have a long way to go, as recent events have shown. In such an environment, the 11th Coastal First Nations Dance Festival — presented with the Museum of Anthropology from February 28 to March 3 — is as beautiful as it is necessary. The Festival was conceived as a revival of similar celebrations in the ’60s and ’70s that emerged once the government lifted its ban on First Nations cultural events.

“We saw, in looking back, the importance of having a place for people to gather and share in artistic practices,” said Margaret Grenier, artistic director of the Festival. “And so that was something that I wanted to carry forward.”

Grenier is also the artistic, executive director of The Dancers of Damelahamid, the Northwest Indigenous dance company that started the Festival in 2008 as part of Vancouver’s Cultural Olympiad. Since 2008, the Festival has showcased performers from as far as Hawaii and New Zealand. This year, new performers included the Yukon’s Boyd Benjamin, also known as “The Flying Gwitch’in Fiddler,” and Norway’s Stina Therese Lorås Hessaa, a Sami dancer who integrates multiple styles in her work.

“[The Rainbow Creek Dancers] have a really beautiful humility in the way that they share their art,” Grenier said. “There’s equality between aspiring artists and those who are established — it’s levelled by the good intentions of all the artists that are working together.”

This focus on community-building came through on opening night in numerous ways. Most of the performers prefaced their presentations by thanking the Musqueam for hosting the Festival and encouraging inter-Indigenous artistic solidarity. The first two days of the Festival were also dedicated to youth outreach programs and performances at schools.

“There’s a need to work inter-generationally in order to bridge the gap of what’s been lost,” said Grenier. “Knowledge that gets passed [down] through practice is something that is very essential.”

Accordingly, the Rainbow Creek Dancers featured performers of at least three generations on opening night. This meant that for the youngest dancers, the performance was as much a learning opportunity as it was a demonstration — a duality that Grenier capitalized on.

“To me that’s what it’s about, that passing forward,” she said. “There’s been this really beautiful work of reciprocity that has taken place with a number of the artists that participate in the Festival.”

Reciprocity — as well as the Festival’s stated goals of reintegration, preservation and reinterpretation — is of utmost importance to the reconciliation process, and dance is an piercing avenue of communication that appeals to the audio as much as it does to the visual. But Grenier also talked about the regenerative effect of the Festival and how it helps to work through traumas of the past in order to better look toward the future.

“I feel very nourished by the Festival,” said Grenier.