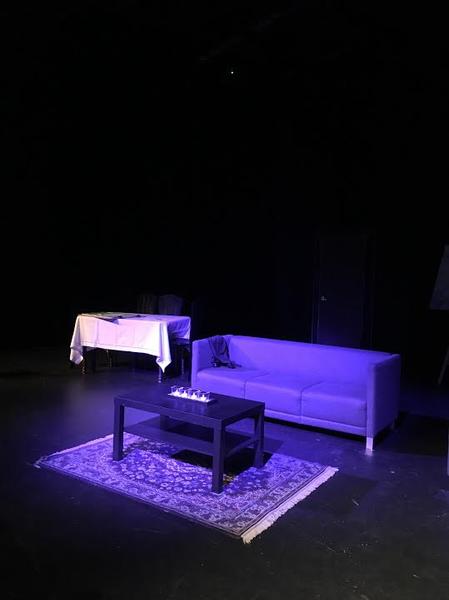 Courtesy of UBC Theatre and Film

Walking into the Dorothy Somerset Studio, I could only see black curtains. I was sure I had somehow taken a wrong turn and had ended up backstage, but members of the Players’ Club assured me that I was going in the right direction. After sitting in my seat, however, I realized that my original suspicions were not too far from the truth. The chairs were set up around the set of an apartment, so close to the stage that they too seemed to be part of the apartment’s decor. This was no accident. Seated almost directly in the action, the audience would have no choice but to intimately engage with the subject matter. Because we were so close, the barrier between actor and audience was muddled as soon as we sat down.

Disgraced, a play written by Ayad Akthar and directed by Gavan Cheema, plopped the audience into a dinner party in post-9/11 New York City. In this climate, the characters’ tempers escalated quickly. Their suspicions and predispositions toward each other were barely masked, and their already-present fears and internal issues were severely exacerbated. They used language that made many in the audience cringe, and at times, became physical towards one another. Because the play lasted 90 minutes with no intermission, there was no break from this onslaught of unsettling scenes. The viewers were instead forced to take shock after shock without a chance to stop to breathe or even fully react.

This staccato effect of heated scene after heated scene, combined with the physical proximity of the audience to the stage, created a play that was difficult to swallow. It was shocking, but it also spoke volumes about the interactions between people across cultures, religions and identities, especially in times of crisis and fear. It was uncomfortable on purpose.

After the play, the viewers were invited “to engage in the hard, yet necessary, conversations that this play brings to the surface.” During the discussion session, the actors spoke about their difficulties playing characters whose views they did not necessarily agree with, but ultimately, how the complexity of these characters’ flaws mixed with their genuine good intentions forced the actors to think about the clash of cross-cultural and intra-ideological interactions. Additionally, given the context of the recent presidential election in the United States, these queries felt especially relevant to both the audience and the cast, some of whom were American themselves. But they felt overwhelmingly that this, at least, was a place where they were able to channel their feelings in a productive way and director Gavan Cheema encouraged the viewers to find their own means of expression to create dialogue about these issues that are prevalent whether we talk about them or not.