East Van existed long before the statue did 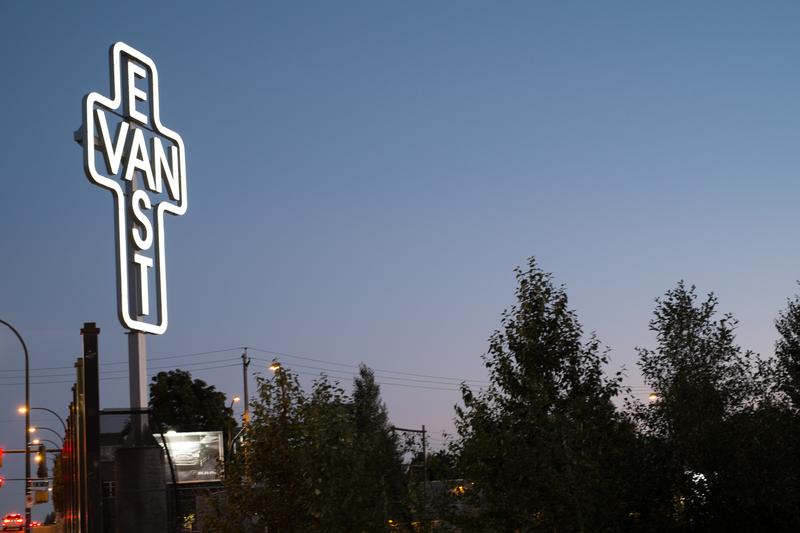 East Van is synonymous with the city’s alternative art scene, the struggle of immigrant communities and the strength of a community historically burdened by poverty. Today, East Van is cooler than ever, which has also brought about its most recent challenge: rampant and shocking gentrification.

Neighbourhoods like Grandview-Woodlands, Hastings Sunrise and the Downtown Eastside are suddenly attractive prospects for investors and real estate developers. As gentrification continues to push these neighbourhoods’ traditional residents even farther east – often beyond city limits – East Van is fighting back, not just with protests, but with a renewed identity. And its flag is the East Van Cross.

Monument for East Vancouver was erected by East Van artist Kenneth Lum and the City of Vancouver in 2010 ahead of that year’s Olympic games. Lum — an honorary professor and alumnus of UBC’s Master of Fine Arts program — intended the piece as a sort of tribute to the neighbourhood where he grew up; a place of solidarity as much as struggle and of success as much as tragedy.

“The East Van graffiti pieces appeared in a very provisional sense, often with chalk or marker on a very small scale.” said Lum. “It really disappeared by the time the Monument was erected. But the funny thing about collective memory is that once it went up, a lot of people said ‘Hey, I remember that.’ I didn't anticipate the response.”

Lum’s piece has become an icon for everything on the other side of Ontario Street — even as the cultural, social and economic disparities of East Vancouver that informed the piece are shifting. Today, you’ll find Lum’s design with its iconic block-lettering and neon-white outline across East Van. Often, it’s a symbol of pride, but the cross has also become a powerful part of East Van’s brand, featured on everything from craft beer to toques. East Van Inc, a small tattoo parlour just off Commercial Drive, proclaims itself "The Home of the East Van Cross"; with merchandise featuring the cross on t-shirts, hoodies and, if you want it, tattooed on your skin.

“I have some friends who every so often send me an email saying ‘Oh, here's another riff on your design.’" Lum laughs.

That a symbol of Vancouver’s working class community should be used to sell hats might seem like a bastardization at best, but Lum is bemused by his design’s appropriation.

“I’m not a policeman,” he said  “Even when it gets misappropriated for beer or whatever, I think deep down there’s an edge to the symbol and its history that will always be there. That’s why it has to remain kind of open.”

The mystique around Lum’s design inspires a whole host of interpretations, whether those be a simple sense of pride or even a deep nostalgia – and perhaps trauma – of East Van’s troubled history.

“What’s interesting about it is that it functions as a kind of signifier; almost like cypher in that you can imbue it with whatever interpretation you want. It remains this repository for all the negative histories as well.”

For all, the cross is a symbol of resistance, a mark of pride for a neighbourhood that has traditionally been home to the city’s working class. Many businesses and residents of “the wrong side of the tracks” consider the Cross their own personal flag; it is easily visible when walking along the now-abandoned industrial strip near Clark Avenue or when riding the Skytrain to Commercial Broadway station, as if to tell passengers they are entering a whole new side of the city.

“What's buried within the Cross is the idea of hardship and harsh history, which is made not explicit, but it percolates somewhat restlessly,” said Lum. “It’s that kind of restlessness which I would say is largely below the surface.”

The times have changed, but East Van still has its hardships. In Lum’s old neighbourhood of Hastings Sunrise, home real estate prices have risen 26 per cent each year since 2010. Formerly a hub of immigrants often struggling to make ends meet, a house in Hastings Sunrise now easily fetches $1.5 million up to $3 million, well beyond the reach of most working class families.

Lum acknowledges that when Monument for East Vancouver was erected in the investment rush of the Winter Olympics, it was a symbol for many real estate agents that East Vancouver, long the wrong side of the tracks, was open for business. He notes that much of the sentiment around the symbol is a sort of ‘cheerleading’, as if East Van has suddenly just appeared, ready for the bars, coffee shops and boutiques that are so easily palatable for the city’s upper classes.

“East Van didn’t arrive,” he continued. “It was always there.”