entrap. at the Hatch lived up to its name 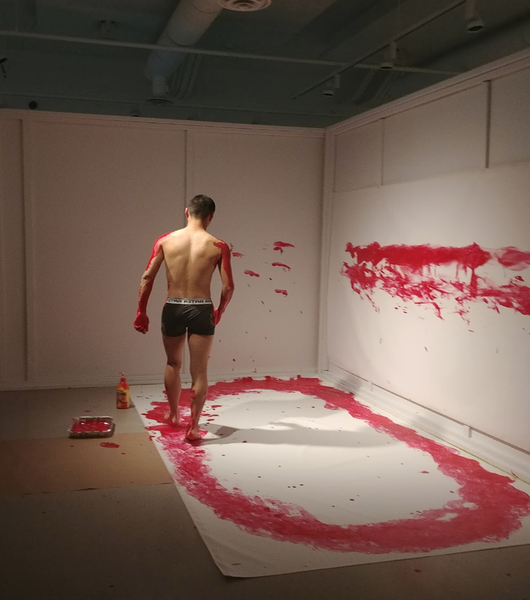 Watching a half-naked man grunt in agony as he slammed himself into a wall in front of a stoic crowd made me feel trapped as all hell. Riya Talitha

Art should be accessible and make viewers feel like they’re part of it. This is especially true for student art on campus, but at the Hatch’s exhibition entrap., I too felt entrapped — and also claustrophobic and weirded out.

Curated and designed by the Visual Arts Students Association, entrap. was accompanied by a booklet where the meanings and processes behind the pieces displayed were written about. While extremely informative, it did make me struggle to find something to write about that they hadn’t already thoroughly over-explained.

Entrap. was the kind of student art exhibition that made me feel like I should have been wearing a black turtleneck. It included a wide variety of pieces that ranged in both tone and meaning.

Bojana Bozin’s The Fraternity used pink lettering to portray ham-handed metaphorical renderings of toxic masculinity. Xuan Hong’s Untitled was a flip book situated in a kind of shelter near the glass wall that you had to walk into to access. I was vaguely disappointed when it turned out to be just a collection of surveillance photographs of parking lots. Imposition, Predisposition, Allocation by Lisa Fevral was great because it fulfilled two student art requirements in one shot: a disembodied torso and the use of classic film clips on a projector.

In one way, these pieces were really beautiful. They neatly drove home the point that nobody — neither the artists nor the journalist reporting on their art — are ever going to get jobs in their respective fields because we both chose dying professions and thus we might as well go all out on the clichés while we still can.

In all seriousness, my favourite piece was David Ezra Wang’s Proof of Assimilation, which was a poster-poem that viewers could take home a copy of. As an international student, it hit me hard and it was while I was about to tear up over it that the live performance began.

The performance artist walked up to a large white sheet on the gallery floor, put down a tray of red paint and then proceeded to strip down to his boxers. He stepped into the tray and covered his hands with red paint. He then started running around the sheet of paper — screaming.

Of course there was a deep meaning behind this artistic performance, but watching a half-naked man grunt in agony as he slammed himself into a wall in front of a stoic crowd made me feel trapped as all hell.

I love the Hatch. I think it’s a great concept and a fantastic space, and it's important to support UBC students. Art should be accessible to the public and sometimes in an effort to make it accessible its easy to over-explain or over-moderate. For a piece of art to be genuinely democratic and non-elitist, the artist and curator ought to trust the public's ability to understand it, to enjoy it, to take it in and make it their own.