Exploring The Tempest's Ariel as a lens to transgender individuals 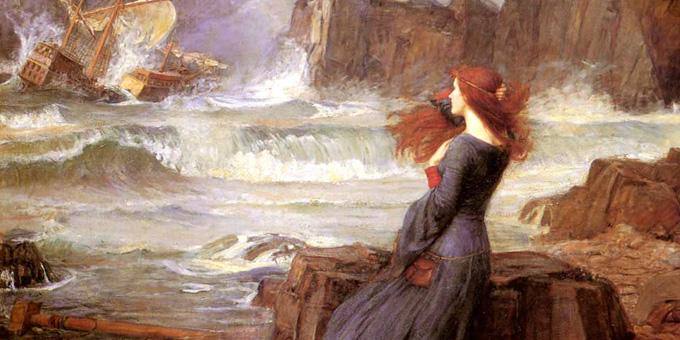 An illustration of Prospero's daughter in the play. photo courtesy John William Waterhouse

What does Shakespeare have to do with the transgender movement? Perhaps more than we think, proposed a UBC professor.

At the Moving Trans History Forward conference at the University of Victoria last weekend, Mary Ann Saunders, an English professor at UBC, presented her paper exploring the character of Ariel in Shakespeare’s The Tempest as a lens into the struggles of transgender individuals. In the play, Ariel is a spirit indebted and enslaved to the protagonist Prospero, who takes advantage of Ariel’s supernatural and shapeshifting abilities.

“In Shakespeare's original play, it's not clear — and hasn't been clear through the centuries — what Ariel's gender is,” said Saunders. “People read Ariel's gender in a variety of ways.”

In Julie Taymor’s 2000 film adaption of The Tempest, Ariel is played by Ben Whishaw, a male actor who was portrayed with female breasts in scenes when the sprite was ordered to take the form of a woman. While analyzing a paper on the film in a course she was teaching, Saunders was struck and offended by the language the author used to describe this depiction of Ariel — including phrases such as “grotesque,” “monstrous” and “an impossible embodiment.”

Recognizing similarities between Ariel's depiction in the film and the bodies of herself and other transgender women, Saunders sought to approach the interpretation from a different perspective.

“What would happen if instead of approaching the character of Ariel through the lens of the dominant culture,” said Saunders, “[it is approached] from the perspective of someone who actually inhabits a body like that and who finds this body a beautiful body, not a grotesque body?”

Exploring this idea in her paper, Saunders found a number of revelations and parallels between Shakespeare’s work and the transgender experience. She likens the character of Ariel, who is at the whim of Prospero’s command, to transgender individuals who depend on medical practitioners to allow them to present in the embodiment they choose.

In another scene, Prospero asks Ariel to take the form a sea nymph to lure a potential suitor for Prospero’s daughter. Saunders sees another correlation here with a stereotype of transgender women who are thought to put on a “false form” to attract “unsuspecting males.”

“This particular stereotype is a massive source of a lot of anger violence that trans women experience because we're seen ... as deceivers and therefore deserving of what we get,” said Saunders.

At the Moving Trans History Forward conference, Saunders was among many other trans activists, scholars and healthcare providers who shared ideas and perspectives throughout the four days. Saunders hopes that her work brings about a sense of awareness with evaluating one’s position and privilege when looking at gendered experiences, especially from the cisgender perspective.

“I'm really aware of how fortunate I am and ... how much privilege I have as a trans person who's employed and who works at a university like UBC,” said Saunders. “I have a lot of freedom to teach the material I want to teach and to teach them in ways that are provocative and challenging.”