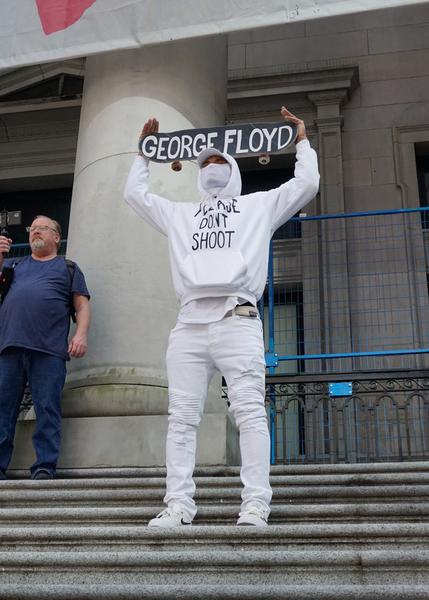 “The idea that someone thinks BIPOC people standing up for themselves is a witch hunt or is cancel culture is so violent and malicious,” says Backerman Sarah Zhao

In UBC’s statement against racism and injustice, President Ono called for the community to “work together to dismantle the tools of oppression and white supremacy that remain prevalent and entrenched in our everyday systems.”

But when a group of Theatre and Film students asked their department about the steps they would be taking after they posted a black square on Instagram, they were met with silence and deflection. This prompted them to take the lead on solving problems of racial inequality in their own department.

In a letter addressed to Professor Stephen Heatley, head of the department of theatre and film, the group of students and alumni working under the name of FABIPOC, Fine Arts for BIPOC, wrote, “We have tried on multiple occasions to engage on the latest posts on Instagram and Facebook regarding the BLM movement, yet we have been ignored. We refuse to be ignored for much longer.”

The letter also states that while they appreciate President Ono’s statement on the matter, his action plan uses a “broad stroke to cover an institution with over 80,000 students and staff. Henceforth, [they] feel that waiting for positive effects to trickle down to theatre & film students is not enough commitment or action.”

For Mikaela Joy Kawaley-Lathan, a fourth-year theatre design and production student and one of the founders of the group, starting discussions with the department in the wake of the murder of George Floyd has been frustrating.

“[They] haven’t been open to starting this conversation so we are going to start it,” she said

“We want to start a conversation about equality and justice,” echoed committee member Laura Isabel, a 2020 graduate from the theatre and film design and production master’s program. “It’s outrageous. It’s 2020. It just makes me angry. I’m here because it makes me angry,” she adds.

Natalie Backerman, a 2018 acting graduate and FABIPOC member, discusses the need to address the fundamental values of the program.

In a written response to the groups' efforts, Professor Stephen Heatley commended the group for their courage. He went on to state that the “faculty of the department is willing to begin discussions with the committee... and implement changes towards this end as soon as possible.”

Isabel said a very small amount of faculty comprises people of colour which is completely unacceptable for a city like Vancouver and for UBC. Backerman emphasizes the need to diversify the faculty without the expectation of them being cultural advisors. Isabel hopes that this will allow students to learn about BIPOC issues in the classroom whilst creating space for students to have these difficult conversations about the industry.

Jenny Lee-Gilmore, a film production graduate and FABIPOC member, talks about how the industry works through referrals and who is ‘easy to work with’ and how having these conversations might get you blacklisted.

“Preparing students to give them the skills necessary to navigate an industry which is still very hierarchical is so important,” she says. “People are still scared of what’s going to happen three months down the line. Am I going to be deemed untouchable for lending my voice to this movement?” adds Backerman.

The committee also emphasizes the need to hire staff for facilitating these discussions within the administration. “We’re volunteers. We can’t fix these problems for you,” says Kawaley-Lathan to which Backerman adds: “We’re also not professionals. They need to hire somebody to put these policies in place.”

They also emphasize the need for curriculum reform.

“These are people speaking from white bodies and it’s not useful for people of colour. If you’re going to teach Canadian or American theatre practices you need to have the conversation of why it’s relevant now. You need to have [a] conversation about how it might affect other bodies in space because it’s not like BIPOC people did not exist. We were there,” Backerman says.

Isabel delves into why FABIPOC is important to her: “My experience has been mainly adapting and camouflaging even. And it shouldn’t be like that, I wish I could be myself. I want to be myself. Why am I forced to not be myself in order to just get a good grade or to be able to get this role or this job or this gig? It doesn’t make sense. I don’t want that. I want it to stop,” she says.

On how FABIPOC will operate, Lee-Gilmore talks about the testimonies they are collecting to show the staff and faculty what is missing and what needs to change through their Instagram account: “Gathering a lot of people’s voices is really important to us.”

Despite this, Isabel mentioned that they have also received anonymous pushback emphasizing that they do not want to put anyone in danger as there is a clear presence of far-right groups within UBC.

Currently, their Instagram account functions as a safe environment for students and alumni to come forward, anonymously if they wish, with the experiences they have had, so that the committee can use these testimonies to hold the department accountable.

“Because our department is so small there is not actually that much anonymity. I am one of two Black people in my program,” Kawaley-Lathan said. “I have been accused of going on a witch hunt.”

“The idea that someone thinks BIPOC people standing up for themselves, asking for change is a witch hunt or is cancel culture is so violent and malicious,” Backerman says. “We are asking for equity. This is a human rights issue.”

Looking to the future

Kawaley-Lathan said that this initiative is important to her because the department is as well.“There are members of staff who have held me while I bawled my eyes out about other things in my life and they have been such a huge support for me,” she said, but she added that she does not want someone else to go through what she went through.

“Why is it that I have just accepted that this is a part of my life?” she asked.

Sharing Kawaley-Lathan’s sentiments, Backerman talked about how she deeply loves this program too.

“There are members of this faculty that I feel so lucky to have learnt from ... who I do believe [still] have a lot to learn. So all of this is coming from a place of deep love and deep respect for our craft, for our art and just wanting to make a better place for students in the future,” she said.

“We’re not expecting them to have all the answers ... I think it’s about having the conversations to work towards answers together and hopefully not all the responsibility lands on us as BIPOC students and alumni to give them the answers,” says Lee-Gilmore about FABIPOC’s intentions.

“I think a huge part of this is asking them to listen to us and to take our movement seriously, applying pressure in the right places to dismantle these systemic issues and to rebuild the curriculum. ... We are aware that this is a marathon and not a sprint,” adds Backerman.

“I don’t think they understand the amount of work that they have to do even though we’ve already put it on paper. We don’t want unkept promises,” says a frustrated Isabel. “I’m here because I’m angry, it is fueling me to want and to demand change.”

“These conversations shouldn’t just be happening within our BIPOC communities. We need allies and people to actively fight with us. ” Backerman adds to the importance of allyship because of how traumatic and emotionally draining it can be for BIPOC people to relive these experiences.

“If you have witnessed any kind of discrimination on campus or in classrooms we need you to amplify that,” she says. “We need to stand together.”