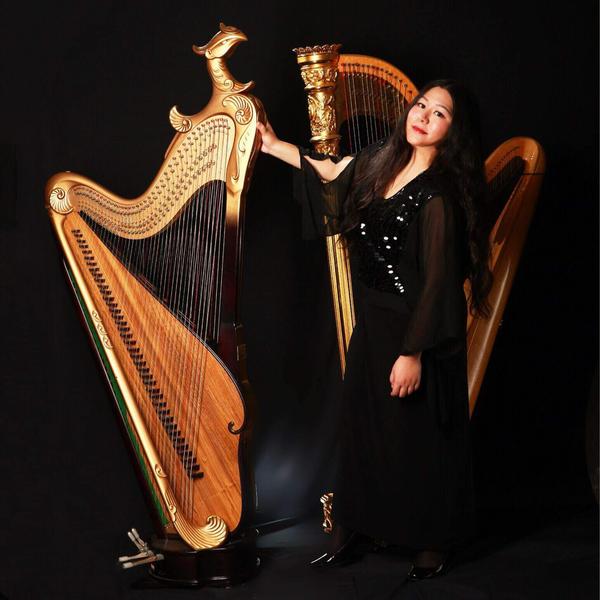 Longing to improve her musicality and technique, Ko decided to pursue a harp degree in her master at UBC, seeking out a Western harp teacher who just happened to be Volpé Bligh herself. Courtesy Nathania Ko

When I mention the harp, the tender background music in Studio Ghibli movies or the tall, golden structure in 18th century-themed documentaries may come to mind. As a heavy, expensive and underrepresented instrument, the harp is found easily in people’s imagination, but rarely in real life.

I always wanted to become a harpist. Before I came to Canada as an international student, I became interested in the instrument after watching a school play adapted from the Greek mythology of Orpheus and Eurydice. In the heartfelt story, the great musician Orpheus moved Hades, ruler of the underworld, with his brilliant harp skills. He was then granted the opportunity to save the life of his bride, Eurydice. Although he failed to rescue his wife in the end, the play did manage to plant the seed of love for the harp into my heart.

Back in China, resources for harpists are very limited. I spent two weeks online searching for a harp teacher in my city and ended up finding only one — even though the place I lived in has a population of over 30 million people.

Due to my plan to study abroad and spend my final high school years in Canada, my harp instruction in China was reasonably short: less than six months. After I landed in Vancouver, overwhelmed by the different lifestyles and schoolwork, I still had the desire to keep pursuing the harp. Thankfully, I had a coincidental encounter with Ms. Miya Otake, a member of the the West Coast Harp Society.

Under Otake’s teaching, I got to spend a meaningful three years of high school with the companionship of both my teacher and my instrument. I was able to perform at school recitals, for group projects and for my parents during my valedictory ceremony.

But when it came to choosing my university studies, putting my personal skill level and future career opportunities into consideration, I set the harp aside and choose media studies — not music — as my major.

Thankfully that didn’t mark the end of my harp journey. In my first year at UBC, I moved my 47 string full-size harp into my dorm at Orchard Commons, and continued to practice amidst my studies.

Being a harp enthusiast at UBC continues to be a blessing and a surprise. Since the creation of the West Coast Harp Society in 2008, Vancouver has been a pinpoint on the map for the traveling harpists.

“We had all these fantastic harpists coming [here], and UBC has been really supportive of this,” said Elizabeth Volpé Bligh, the harp instructor at UBC School of Music. “We have a history going way back of having great harpists coming to UBC: We had Nancy Allen, Alex Giles ... we had all these amazing people.”

Volpé Bligh explained that the way UBC brings these harpists to campus is through direct, personal invitations. When harpists come to UBC, they will usually not only perform recitals but also give one-on-one master classes to UBC music students — complimentary, of course.

Boldachev is a young, energetic composer, and his music is full of inspiration from self-improvisation and pop elements. He was also a performer at the 2018 Russia FIFA World Cup Opening Ceremony. On the other hand, Megan — the winner of the 16th Israeli harp contest, the top harp competition in the world — conveys his music in a more classical, imagery-based way.

“I enjoyed playing here at UBC, even though there are not so many people in the public,” said Meagan. “It was nice to visit and get to know Elizabeth and her students, see what’s happening in the harp world in Vancouver.”

Both Boldachev and Meagan’s performances inspired the harp students on campus. To master student Nathania Ko, Meagan’s master class has also helped her better understand the piece she performed at her own recital: Arabesque No.1 by Claude De Bussy.

As a first-year masters student majoring in the harp, Ko has the almost perfectly opposite relationship to the harp than my own. Born and raised in Vancouver, Ko never really had the chance to learn the harp. However, during a trip to China, she found herself in love with the traditional Chinese harp — Konghou, a nearly-extinct instrument.

To pursue her dream of bringing this instrument back to the public, Ko gave up her college offers from several North American universities — including an engineering offer from UBC — and went back to Shenyang Music Conservatory to pursue her bachelor degree in Konghou.

“[Konghou] was extinct for 400 years. Thirty years ago, my professor’s husband in China rebuilt this instrument … Before me, there were only [fewer] than 10 people graduated from the Konghou Degree,” said Ko, “[and] to be honest, the Konghou has not yet developed a systematic technique.”

Longing to improve her musicality and technique, Ko decided to pursue a harp degree in her master at UBC, seeking out a Western harp teacher who just happened to be Volpé Bligh herself.

“I don’t want to stay in China for my master’s degree,” said Ko. “I want to bring this instrument out of China … and [Volpé Bligh] just said, ‘You know what, I’d really like to help you establish outside of China.’”

With the help from Volpé Bligh, Ko brought her Chinese harp back to Vancouver and started to learn the western harp in September 2018. Right now, she’s trying to combine her knowledge on the Chinese harp and the western harp together, using innovation to promote the traditional instrument.

So, if you’re wondering where to spend your Friday night or have a first date, give a walk to the Bernett Hall where harp concerts are usually held — you might just find a whole new world of music here at UBC.