Francis Fukuyama is still waiting on the end of history 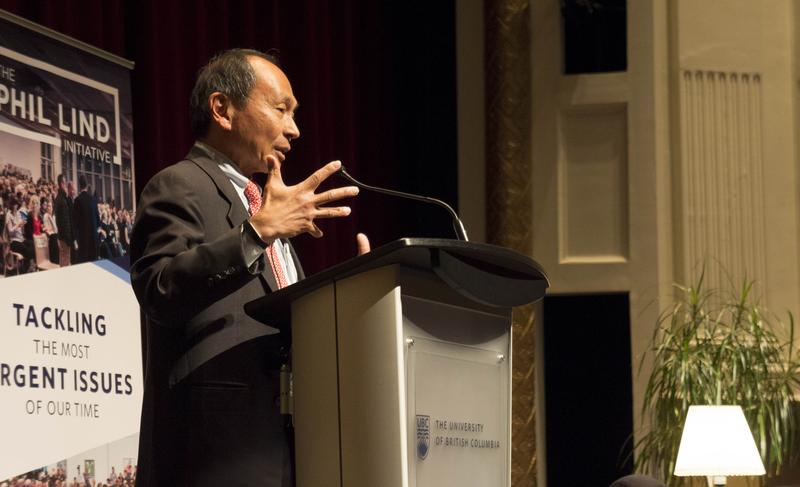 Few political theorists have inspired as much discussion, admiration or ire as Francis Fukuyama. In 1992, Fukuyama famously predicted that the collapse of the Soviet Union signalled a global regression towards liberal democracies, signalling an “end of history” as we knew it.

Twenty-six years later, with Donald Trump in the White House, deteriorating democracies in Poland, as well as authoritarian regimes in Turkey and Russia, Fukuyama paid UBC campus a visit as one of the Lind Initiative speakers on the unraveling of the global liberal order. This time, he brought fewer predictions but many more warnings.

Fukuyama started his talk on the premise that between 1970 and 2008, everything was pretty swell: the great powers never went to war — at least not directly, anyway — everyone who took part of free trade benefited and the quality of life universally improved. We imagine many folks in the global South wouldn’t be so agreed on that — but let’s let Francis do his thing. The number of democracies increased in this period, and for Fukuyama, that means history was on its way to its eventual statis — a world where every country is a liberal democracy, adverse to war and ruled by and for its people.

But one group of people is being left out of all this great change: low to medium skilled workers in industrialized countries.

Sandwiched between automation and globalization, they suddenly aren’t touching the benefits of all this growth. And they’re pissed — so pissed that they’re going populist, vying for short-term nationalistic and economic gains over the steady growth offered by liberal democracies. The result is the economic and populist one-two punch of Brexit and Trump, the extreme right co-opting the identity politics of the left, and perhaps, the unravelling of the liberal order.

When it came to the liberal order, Fukuyama was unclear what the solution was — or if there even is one.

The fabric of democracy, he said, is holding strong. Institutions, the intelligence community and the media are fighting erosion of democracy for all they’re worth. But even if the material is holding, the weaving is off — the shift to identity politics on the left, said Fukuyama, has undermined its traditional working class support base. The pilfering of those politics by the right has created its own series of menaces.

And for that, Fukuyama was understandably short on solutions.

Do we move away from identity politics altogether? As one student pointed out during the question period, those politics also brought a profound amount of social change for minorities that can’t be forgotten. Do we return to the leftist “great coalition” that implemented so many socio-economic protections in the mid-twentieth century? Fukuyama would like that, but pointed out that it might collide with more progressivist visions of the left.

All the while, he stressed that we shouldn’t underestimate the voter — that people wouldn’t be easily fooled by another Trump.

It was a talk that left the audience with an anxious optimism. The global liberal order might be unravelling, but Fukuyama is confident that we can weave it all back together. The question then — and the ending note of the talk — is whether we should weave it back into what it was or envision something new. In a post-Trump world, when we eventually do see it, what will normal look like?

You’ll have to buy the man’s next book to find out. In the meantime, Fukuyama is still ready, waiting on the end of one history and the start of another.