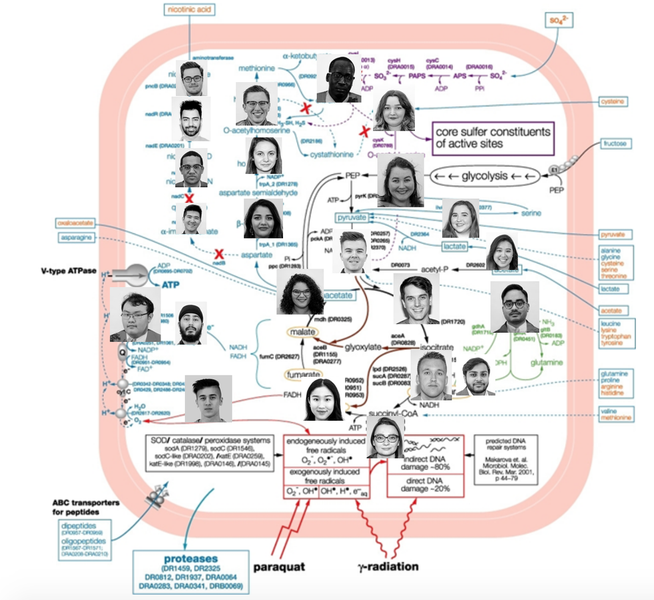 Thankfully, this biochemistry student is here to make everything about AMS elections make sense again, through the very intuitive lens of metabolomics. Wikipedia, edited by Bridget Chase

AMS elections season can be an incredibly confusing time of year. It’s hard keeping track of all the different positions, candidates and referenda. Sprinkle on the intricacies of each candidate’s individual opinions, views and goals, and baby, you’ve got an election stew going!

Thankfully, this biochemistry student is here to make everything make sense again, through the very intuitive lens of metabolomics. Pay attention – this will be on the exam.

Composition and Synthesis of the Alma Mater Society: A Systematic Review

The Alma Mater Society (AMS) is critical in maintaining the function of the University of Bountiful Cash (UBC).

The AMS serves as a conduit between the Governing Bodies (GB) of UBC and the Student Body (SB). To understand its function and better manipulate UBC into serving our interests, it is pertinent to pursue research into the AMS’s composition and synthesis.

To facilitate this, we have conducted a thorough review of Wikipedia ResearchGate credible, peer-reviewed, highly academic literature.

The AMS is an independent body within the UBC system, and while its history remains enigmatic to most, research points to exogenous origins (1). Like the mitochondrium, the prevalent theory claims the AMS originated as a parasitic entity that became mutualistically dependent over time within the UBC body (1).

The AMS is sustained by the SB through student fees ($$$CASH MONEY$$$), also the main energy source of investments (2). $$$CASH MONEY$$$ is generated by the student body via the Student Loans (SL) pathway, and potential toxic byproducts of the process include Crushing Debt (CD) and Alcoholism (EtOH) (3).

However, alternative methods of synthesis exist in those possessing the dominant Rich Parents (RP) gene, found in 1% of individuals. Students with RP don’t accrue CD, though they’re at higher risk of EtOH accumulation (3,4).

As students graduate from UBC, the AMS is depleted and must be replenished at the end of every school year.

The ET are synthesized through two pathways: the Candidate Salvage Pathway (CSP) and the de novo Synthesis Pathway (dnSP) (7,9,10). This mirrors the synthesis process of the Board of Governors (BoG) and Senate representatives, though the functions of the latter two remain among the greatest mysteries of science (7,8). There also exists the Student Legal Fund Society (SLFS), a mostly untouched area of research.

The dnSP is the more energetically expensive pathway of synthesis, as future candidates must rise from the common masses into prominence (7). Most students are unable to surpass the Activation Energy (AE) to do so, as they are saddled with schoolwork (BSc) and existential dread (BA). Only the truly masochistic (PhD) can leap this barrier, providing selective pressure to ensure only the strongest and/or most emotionally damaged can reach the ranks of the ET (7,9).

The more energetically favourable CSP recycles the previous year’s candidates to form the new ET (10). Already members of the ruling class, previous candidates need not expend as much energy on self-promotion (9). While this process may appear more favourable than the dnSP, it is not without its faults. Just as telomeres are degraded with continuous cell divisions, the strain of being part of the ET erodes away the student’s humanity (9). Recycled candidates run as desiccated shells of their former selves (10).

At the end of elections season, successful candidates are chosen by the SB and elevated to their gilded thrones (7). The losers are then eaten by the victors, their stolen powers fueling the ET as they brave another year (7). So continues the brutal cycle of student politics.

Mitochondria are the powerhouse of the cell.