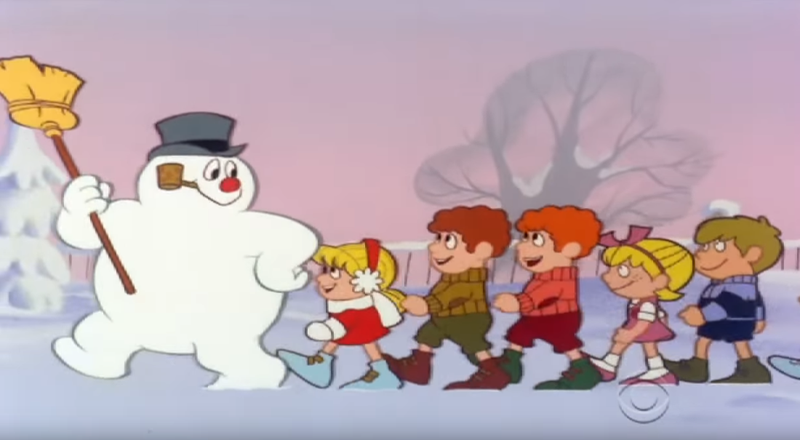 As I watched it (and read about it) I identified two enemies in Frosty’s story: the greed of capitalism, and arguably, climate change. CBS

Back in the early 2000s, my parents came back to Colombia from a trip to the United States with gifts and treats for me and my siblings. North American merchandise was always shiny and coveted south of the equator.

Among the imported treasures, there was a CD, Frosty the Snowman: Christmas Favorites sung by the International Children’s Choir. It was a huge success at home, overplayed on our boombox, to the point that our eager DJ-ing ended up scratching the disc.

With time, we grew up along Frosty’s CD and got further acquainted with the myths and legends of American Christmas, we sang along to “Rudolph the Red-nose Reindeer,” danced to “Jingle Bells” and began dreaming of a “White Christmas.”

From ‘Frosty The Snowman’, I took away that building a snowman was a holiday rite of passage, at least for the record’s anglophone children. Snowmen would typically have a lovely stack of three-piled snowballs, “with a corncob pipe and a button nose and two eyes made out of coal” that brought joy to children all over that winter-experiencing world.

But Frosty seemed somehow foreign to my Colombian Christmas traditions: there was no manger or praying to baby Jesus nine days before December 25. Yet, I still saw Frosty in movies, in songs, in Christmas cards and all sorts of memorabilia. And so it struck me,

Who even is Frosty and what is his connection to Christmas?

I ventured to the internet, and on YouTube, I found a video of the 1969 animated TV special that was based around Steve Nelson’s and Jack Rollins’ 1951 carol.

As I watched it (and read about it) I identified two enemies in Frosty’s story: the greed of capitalism and arguably, climate change.

The first is embodied in the failed magician Professor Hinkle, who got rid of his hat before realizing it could magically bringing Frosty to life. As a result, the magician wanted it back to make money (sigh), despite the fact that it would steal the children's holiday fun.

The second menace to Frosty’s existence is rising temperatures. As the sun warms up the backyard, Frosty begins to *sweat* and tells the children what could happen if it gets too hot. The solution is, of course, to take Frosty to the North Pole, where he can never melt.

This is where we see a glimmer of Christmas as the film interacts with the mythology of Santa Claus. This was not apparent just from the lyrics of the carol!

Additionally, this Frosty tale is set here in Canada.

When Frosty and schoolgirl Karen first attempt to get a railway ticket, the booking clerk mentions a route to Saskatchewan and Hudson Bay and eventually suggests that to get to the North Pole, they must change trains in Nunavut territory,

In the movie, Hinkle, who sneaks on the train, traps Frosty and Karen in a Poinsettia-filled greenhouse in the middle of nowhere.

Once trapped inside, Karen was fine but Frosty, well…you know.

Now, here’s the part of the story that I don’t understand.

In the midst of the drama, Santa Claus himself decides to stop at the greenhouse (for some reason) and brings Frosty back to life whilst delivering free Uber services for Karen, who needed to be home “in time for supper” and then takes Frosty to Santa’s hometown.

The TV special was not what I was expecting. While Frosty is the result of children’s playfulness and loyalty to their snowy creation, values Santa defends, it seems like capitalist greed and climate change are an existential threat to these wholesome values.

Now, in 2020, acknowledging Frosty’s menacing disappearance is more urgent than ever. The planet is our greenhouse and it is full of Hinkles.

However, I do have some pointers for Frosty.

For starters, perhaps Frosty could be less complicit in selling his image to foster a capitalistic Christmas-holiday shopping spree.

Lastly, perhaps Frosty could do himself a favour while reducing emissions. It’s never too late to quit smoking from that pipe, and perhaps replace those coal eyes for something more harmless?