From class to stage: the journey of eight UBC students to success at the Fringe Festival 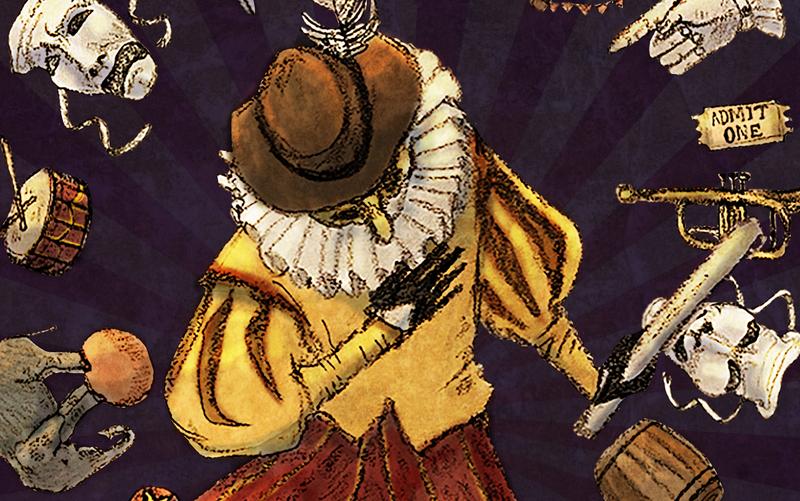 The 2016 graduating class of UBC’s BFA Acting program started off as a group of classmates, grew into friends and then transitioned into coworkers. The eight members of the program studied in close quarters for three years, sometimes spending 10 hours a day, six days a week together in an effort to perfect their craft. The Ubyssey sat down with the group to talk about the process of surviving the BFA program, devising with their hit show Love, Lust and Lace, taking it to the Fringe Festival, and — in the midst of it all —forming Gas Pedal Productions.

The maximum number of students for each BFA Acting class is 16. So, with only eight, the 2016 graduate class was particularly small. The group consisted of Francis Winter, Elizabeth Willow, Parmiss Sehat, Mariam Barry, Meegin Pye, Kelsey Ranshaw, Joylyn Secunda and Selene Rose.

To be surrounded all day, every day by such a small group of people for three years makes the program very tight knit. Sehat — like every honest reality TV star — laughingly admitted that she “wasn’t here to make friends.” But by the second year, the class had become like a family. “I think it was magic. I don’t know how it happened with us, but it’s unique,” Secunda said.

“Clowning is such an intense experience ... and being able to have that kind of sense of play with one another was just a testament of how well we worked together and enjoyed one another’s company,” said Sehat.

Unlike a traditional production, there was no writing process. Love, Lust and Lace was the product of almost entirely improvisation.

“We spent a long time playing around with masks and finding different characters within [them], because every clown is very different,” said Barry. “It is said that every clown is motivated by one of the Four F’s — fleeing, fucking, fighting or feeding.”

Winter called their process “reactionary writing.” “We took a look at the classic scenarios and asked ‘Okay, what kind of story do we want to tell?’ and we created this dramatic structure around our class.”

What started as a class project ended up being run not once, but three times. “I was very surprised ... just at how much people enjoyed it,” said Pye.

After their first successful performance at UBC and some prompting from the group’s movement teacher, the cast re-mounted the show for a second time. Then, with another successful run under their belt and some money in the bank, the group decided that the next step was to take the show to the Fringe Festival, here in Vancouver.

The application into the Fringe is a lottery system and while the group didn’t get into the initial round, they applied for the “Bring Your Own Venue” (BYOV) category and aimed for a spot at the Firehall Arts Centre. They didn’t get it at first, till another production dropped out. “We were all set to say ‘Okay, we’ll try again next year and see where we’re at’ and then nope, we’re in!” said Winter.

The group had a show, they had a stage and now all they needed was an umbrella company under which they could run the production. “None of us have any money or the resources [or experience] to put on a show ... but maybe if we have a company, those things will show up!” said Winter.

“We formed the company mainly as a platform for which we could take Love, Lust and Lace to the Fringe. We were unanimous on the name — we liked the alliteration,” said Ranshaw.

Willow explained that the first time they did a run of the show, “Mariam played ‘Gas Pedal,’ by Sage the Gemini, and we would all sing it together and do the dance and so Gas Pedal Productions kind of came out of that.”

“Yes, it’s an inside joke, but it’s also the idea that we want to push the envelope,” Barry added, “We’re hitting the gas pedal with the kind of theatre that we’re creating.”

The Vancouver Fringe Festival was a different ballgame than performing at UBC. “[We quickly learned] how hard it is to self-produce,” said Willow. “The amount of time and effort and money and logistics ... That is something I feel theatre school does not prepare you for, because you are kind of in this safe little bubble where all you have to do is act — everything else is taken care of. So it was definitely a wake-up call in terms of this is how much work it is to do everything.”

Ranshaw said that they could not have done it without the help UBC provided through set materials and costumes, allowing them to produce their show with less worry within the group concerning the making of money.

Of course, it is no longer just a UBC audience filling the seats, and there was a risk that some of the raunchier jokes might not translate too well. “Some of the stuff that we do is a bit … well, let’s just say that at one point I flat out pull somebody from the audience onto stage and spank them,” said Pye. “I was initially very concerned about that, because when we did it at UBC, it was a safe environment. We knew pretty much everyone that was there in the audience. But in a public environment, if you have a person that you don’t know, you have to adapt it.”

Willow added that “there [were] some lines that stayed the same and the shape of the show stayed the same, but within it, little things have changed over time. Especially when we started playing to a diverse audience.”

After the lace comes off

The show was an overall success and what started as a class project, ended as a profitable company – something that is a rarity at Fringe. “When you’re going into a show, write down a list of absolutely everything you need to make [it] work,” said Winter. “Realize that every single one of those things is going to cost a lot of money. If we didn’t do a lot of fundraising, we wouldn’t even be close to breaking even right now. We’d probably be $1,000 in the hole.”

“It was amazing to me how many little details there are when it comes to putting on a show,” said Rose.

Willow added that, “people end up in debt by the end of the Fringe because they don’t make enough to pay themselves back. A really huge thing at the Fringe is getting a good review early in your run. That makes or breaks the rest of your run.”

So what is up next for everyone’s individual careers? Both Willow and Winter are acting with United Players in a production called Ghosts, which runs from November 4 to 27, at the Jericho Arts Centre.

Barry is assistant directing Ghosts — the same show that Winter and Willow are in — as well as starring as Jory in Disgraced with the UBC Players Club and as Judith in The Belfast Girls with Peninsula Productions.

Pye says that she has recently discovered that she’s interesting in writing and creating her own work.

Sehat just wrapped up an indie film, as well as an As You Like It adaption workshop with Bard on the Beach. She will also be featured in an upcoming show with Carousel Theatre called Sultans of the Street.

Rose is now a part of Shakespeare After Dark, a Shakespearian tragedy improv group with Instant Theatre Company, and Sin Peaks, a soap opera improv group.

Ranshaw is in the process of doing her 12-month Bachelor of Education, hoping to find the balance between teaching and acting, as well as working on a podcast by playwright Andy Garland called Duggan Hill.

Secunda is taking the last two (unrelated) classes of her degree and working on writing a piece that may be the beginnings of a one-woman Fringe show.

As for what’s next for Gas Pedal Productions? Pye suggested publishing the script and Barry mentioned remounting the play again. “Some people have ideas of doing a cabaret-type performance, doing little bits of solo pieces or even having smaller groups working together,” said Secunda.

“I’m really excited to try new things, but I always have this family here and so whenever we reconnect, it’s like this beautiful familial bliss,” said Secunda.

For some, the idea of devising and producing your own show might seem daunting. But to this, Barry disagrees. “Everyone started like this. A group of friends got together, one person wrote a little piece ... and they got up on stage and they did it. You start whenever you decide to start. You don’t have to wait for someone to give you permission — you just have to begin.”