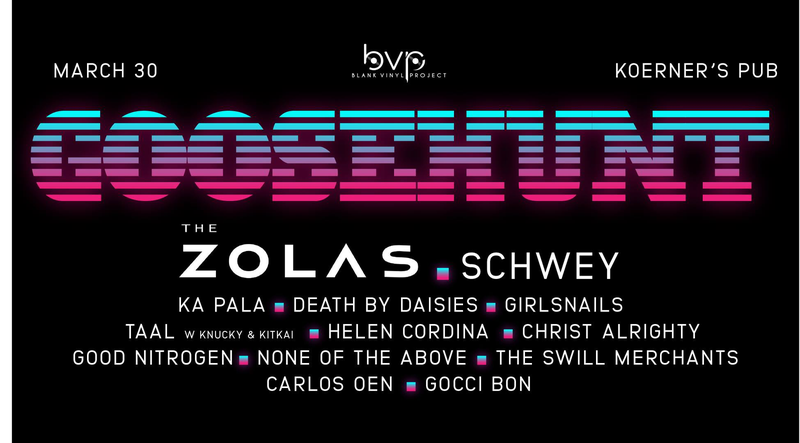 girlsnails initially entered Shindig as a way to get more comfortable playing live, and ending up coming in first place against a frequent onslaught of three-way band battles. Courtesy Goosehunt

Hot on the heels of their win in February at CiTR's Shindig, girlsnails will play at 9:20 p.m. on the outdoor stage at this year's Goosehunt festival. Having found their vocalist Laura Kim at last year’s Goosehunt, it could be said that the festival is a lucky night for the quartet.

girlsnails don’t fit neatly into their loosely-ascribed "math rock" genre. Their music features complex time signatures in conjunction with a dreamy, fresh sound. They also acknowledge the musical influences of their members' pasts: wind band, orchestra and classical guitar. The result is a unique sound that’s difficult to pin down.

The bands they look up to veer away from the “typical rock band structure” and girlsnails pursue this in their live performances with the addition of a small wind section. The band values experimentation, making sure to keep trying “different sounds,” often dipping back into random riffs and pieces from their past endeavours and reinventing themselves as a group.

What we currently know as girlsnails hasn’t always looked like this. The band members have played together in many different capacities, from community bands to high school jam sessions. The way that they present today seems mysterious and full of potential.

girlsnails initially entered Shindig as a way to get more comfortable playing live, and ending up coming in first place against a frequent onslaught of three-way band battles.

Their name, their look and their sound is inscrutable, but guitarist Michael Robertson said, they “like the ambiguity.”

Judging by their musical experience and on-stage proficiency, this group of talented musicians shows us their success definitely more than beginner’s luck.