Giving Tuesday: giving to non-profits instead of retailers 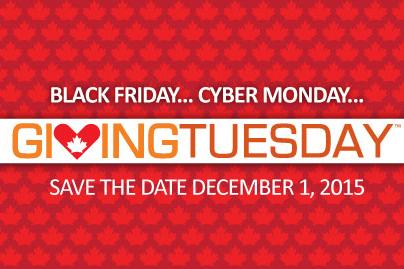 Giving back to the community combats the gluttony of spending. Photo courtesy Giving Tuesday

Black Friday. Cyber Monday. Christmas Shopping. Boxing Day Sales. New Year’s Eve party tickets. It's an expensive time of year for a lot of people in Vancouver and it’s the time that many companies rely on to increase revenue. Ironically, non-profit organizations face the same sort of “make it or break it” situation in a final effort for donations.

“The name Black Friday came because it’s essentially [the time] when companies start working ‘in the black’ instead of ‘in the red’," said Suzanne Ostrow, director of annual giving within the development and alumni engagement department at UBC. "This day becomes your turning point when you’re making a profit."

“There’s some correlation to the philanthropic community in that you make money throughout the year, but now is the time you’re doing that big push.”

To combat the season’s focus on consuming, Ostrow and her team have been encouraging the UBC community to take part in a recent global movement called Giving Tuesday that emphasizes giving back to communities through non-profit organizations.

Giving Tuesday began in 2012 in New York, supported by the UN Foundation. Since then, it has gathered support around the world, with Canada joining the movement in 2013. Ostrow wasn’t shy about pointing out the material preoccupations that dominate the holiday season.

“Giving Tuesday is a wonderful concept: after your gluttony of spending, why not think about being philanthropic?” she said.

Today is #GivingTuesdayCA! #UBC is celebrating philanthropy and you can join in: https://t.co/qaQfQOfPqf #UBCgiving pic.twitter.com/Vky4bitduw

Ostrow’s department focuses on donations within UBC. According to Ostrow, there are about 6,000 funds within the university that support various causes. Options include the UBC Farm or the Women’s Leadership Initiative, as well as many projects contributing to medical research, sports teams and outreach to youth.

Ostrow also stressed the value of volunteer work or any act of giving.

"If you don’t have five dollars to give, maybe you have ten minutes of time to give someone,” she said. “You have to remember a little bit from all of us makes a difference.”

Indeed, the numbers are impressive. Last year, the department received $10,000 on Giving Tuesday through their giving portal online that they can directly attribute to the movement. In Canada, there are 3,000 participating partners in Giving Tuesday. The first year increased Canadian donations by 169 per cent, with the second year rising by another 75 per cent on top of that increase, according to the national website. Across the globe, there are 18,000 partners spanning 43 countries.

While Giving Tuesday raises money, Ostrow also asserts that it is about encouraging the action of giving. Last year, her and her team showed how simple philanthropy can be by handing out ramen noodles to students, as well as two pieces of candy with the instructions to keep one and pass the other on to someone else.

Over the past 100 years, donors have shaped our campus. Take a look in this map: https://t.co/UxySFkXTUY #UBC100 pic.twitter.com/ikn9qIMWeR

“I don’t care what you’re giving or how you’re giving, it’s just about participating,” she said. “It’s about saying, ‘enough is enough, let’s support each other.’”

There are many organizations in Vancouver that are partnered with Giving Tuesday including the BC Children’s Hospital, the Breast Cancer Foundation, EcoJustice and The Harvest Project. No matter where or how someone gives, Ostrow encourages everyone to share their giving stories on social media with the hashtags #GivingTuesdayCA or #UBCgiving.

Even just sharing our support for philanthropy is enough participation.

By big or small means, Ostrow leaves us with the message to turn not just December 1 into a giving day, but to help change the buying season into the giving season.