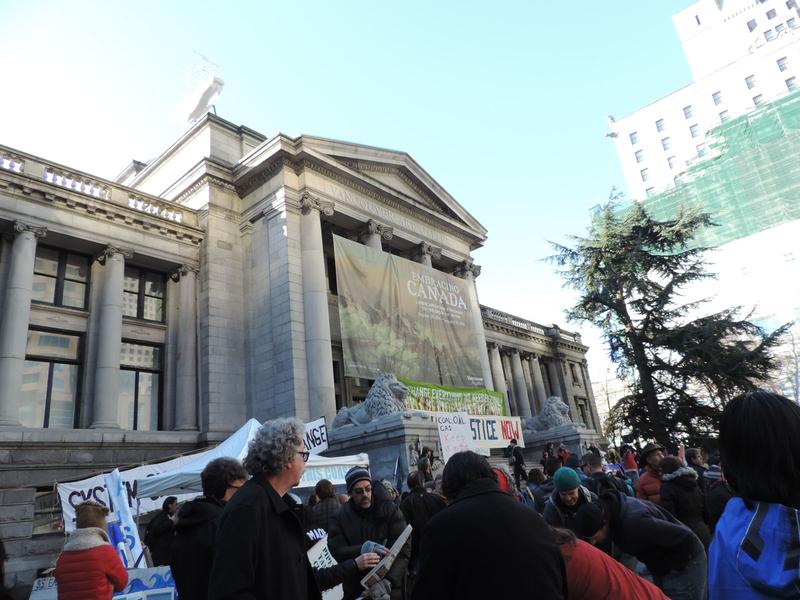 Vancouver is just one city of many who are fighting climate change.

When leaders met this week to begin the 2015 UN Climate Change Conference in Paris, they weren’t the only ones to congregate in the name of climate change. Vancouver hosted a Climate March on Sunday — one of many marches across the globe to show solidarity with Paris.

The international movement will culminate in a mass gathering in Paris on December 12 after the talks conclude. These marches aim to put pressure on the leaders to initiate productive climate change policies, opposed to the lacklustre results seen from previous conferences such as Kyoto, Copenhagen and Lima.

Organizers for Vancouver’s march varied from big names such as 350Vancouver and Greenpeace, to smaller advocacy groups including We Love This Coast. The local group’s leader of We Love This Coast, Shirley Sample, acted as an emcee for the event and described its importance in an e-mail: “All of us are aware that there are so many vulnerable people on the planet – attending this march is truly an expression of our humanity. When the most vulnerable people on this earth are at risk, we are all at risk.”

Indeed, global citizenship is a theme many supporters emphasized.

Roxanne Hasior, a representative from the UBC chapter of 350.org, stressed the need to “show solidarity with all the other citizens around the world who are looking to leaders in Paris for specific targets that are achievable, but also ambitious.”

UBCC350 also hosted an event on campus on Monday to support Paris while emphasizing the group’s main focus on persuading UBC to divest from the fossil fuel industry.

“We need to be aware and participate on [a global] scale, but I think we also need to think about what we can do on campus and what we can do in our cities to be part of the solution,” Hasior said.

Common Energy UBC, UBC’s largest student-led sustainability organization, was another participant on Sunday which also focuses on campus initiatives. Looking at their campaign to rid UBC of bottled water, the group’s director, Sarah Barnes, recognizes how complex these issues can be.

“UBC has a lot of contracts with companies like Dasani. They bring a lot of money to UBC and finding alternatives for that is where the problem lies,” Barnes said.

This small-scale example speaks to how environmental negotiations can encounter bureaucratic or economic obstacles.

However, Barnes is ultimately optimistic about the march and the conference. She’s encouraged by youth participation, citing October’s election as proof that youth showing up is a game changer.

As the conference is underway, we can only hope national representatives have the same optimistic drive as these grassroots organizers.