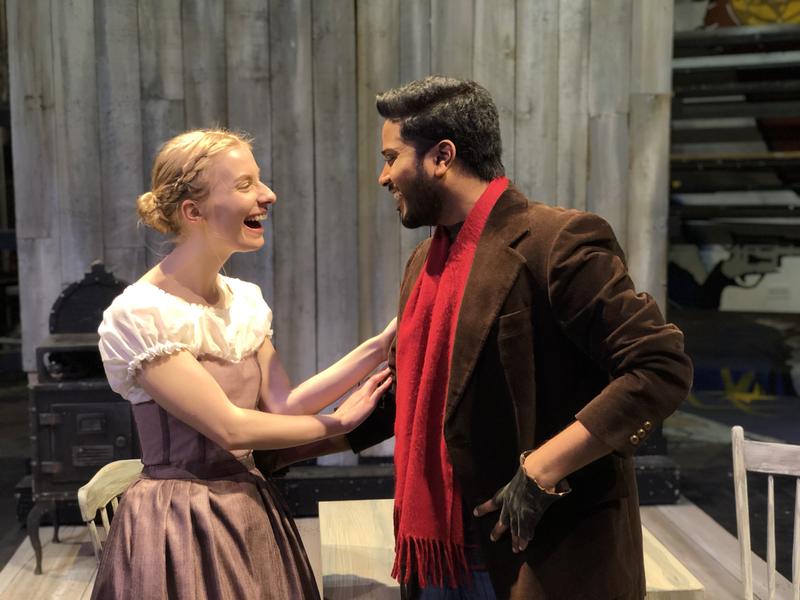 A certain amount of cringeyness is to be expected. Elizabeth Wang

GOLDRAUSCH is a fun comedy, with scenes that are so cringe-inducing it’s sometimes hard to watch.

A certain amount of cringeyness is to be expected. In fact, it’s what adds to the production’s humour and charm. After all, this is a show about making a very bad movie, so it makes sense that some of the scenes will be… well, bad. But as someone who suffers from second-hand embarrassment, there were moments that left me sinking down in my seat, wishing I could save both myself and the actors from the discomfort happening on stage.

Still, GOLDRAUSCH does not fail in its overall mission to break the fourth wall and encourage the audience to consider why people create art and who has the right to tell a certain story.

And the production, despite a few moments that fell flat in front of a silent audience, is still funny. The interplay between technology and the actors is innovative and effective.

The camera used by the fictional film crew actually hooks up to a large screen on the stage, and moments are live-streamed above the set. This creates some absolutely gut-busting moments where the audience gets to see the actors’ horrified and purposefully over-acted expressions close up. Every time the camera started rolling, the theatre was roaring.

The set of GOLDRAUSCH was also a success. Scenic director Luis Bellassai created a beautiful world that melds pioneer-style log cabins with funky graffiti. The movie is filmed in an abandoned warehouse, and the space manages to feel both neglected and loved, perfectly suiting the mood of the play. The students themselves painted the stage, and the colours are bright and inviting.

The music in the piece was surprisingly enjoyable. The cast belts out warbling karaoke pieces with just enough twang to make the audience feel like they could be raising cows on the undeveloped California hillside. The line dances liven up the scenes and it’s fun to clap along as the the actors pigeon toe and slap-leather.

Overall, GOLDRAUSCH is a fun production for those with a very specific sense of humour who don’t mind a few awkward moments.