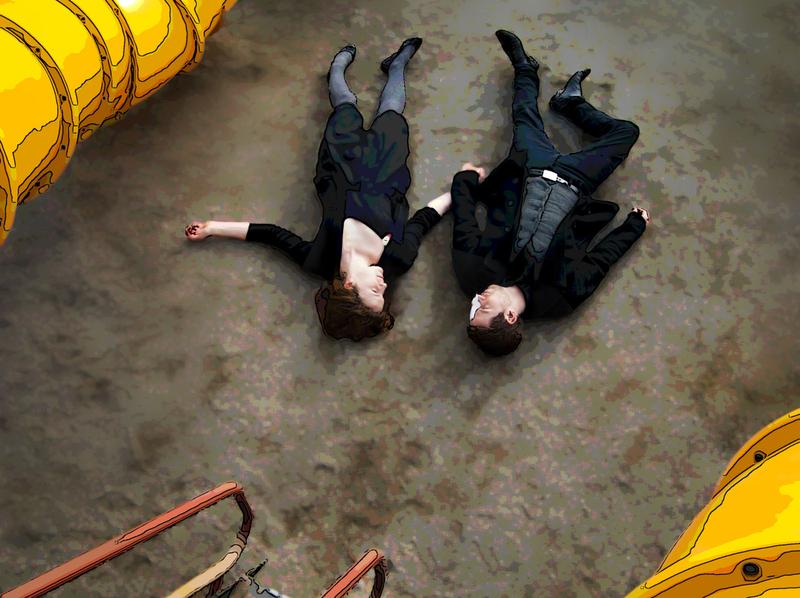 The play in non-linear and follows the characters over a 30-year timespan. Photo courtesy Matt Reznek

Gruesome Playground Injuries, a play written by Rajiv Joseph, will have its premiere at the beginning of next month.

The play details the ups and downs of a relationship between Doug (Kenton Klassen) and Kayleen (Pippa Johnstone) from when they were eight years old, all the way until they are 38 years old. Gruesome Playground Injuries is not only unconventional in that it follows two characters for 30 years, it’s also non-linear in its execution.

“It’s a lot of fun to see some of the same patterns play out, but at different ages,” said Klassen on the experience. “Certain things are revealed and expressed in a different way because there’s a big difference between eight years old and being 23 or 38. There’s still some consistency in their characters and their relationships and so the [Joseph’s] use of the different ages highlights who these people really are.”

Regarding their characters, Klassen comments that Doug, while a daredevil, is “goofy, impulsive and devoted.”

Johnstone, who plays Kayleen, remarks on how her character has had a really painful life.

“[Kayleen’s] not mentally healthy,” said Johnstone. “She doesn’t think highly of herself and I think that makes living really, really impossible for her.”

One of the remarkable things about this play is that it is focused solely on two characters as opposed to a whole cast of characters, which makes for a very intimate experience. The actors’ connection to their characters lie in Kayleen and Doug’s inextricably deep relationship with one another.

“I think we’ve all been in relationship where we just want to help somebody else and fix them, but you can’t,” said Johnstone.

“Both characters I’d say have some sort of thing they’re missing, that they’re looking for in the other person. That’s something we can all relate to,” added Klassen. “Trying to fill the void in our life with other people and with what other people have.”

Klassen and Johnstone work closely together with director Chelsea Haberlin in conveying the appropriate emotion and mood.

This is the second time Gruesome Playground Injuries has been performed, the first being two years ago. The cast members, design team and director are all the same when it was performed as part of an apprenticeship program.

While most plays try to hide transitions, this play makes it a point to have transitions between costume and set changes shown in front of the audience. Haberlin said that although the transitions were difficult, the most challenging part this time around would be the text itself.

“We go to a certain level. But because we’re coming back to it, we can go that much deeper and that’s challenging. I think because you have to find so many more clues to fill in your [character] and we have an idea that there’s magic in the play, now we need to find that in the script and that’s not easy,” said Haberlin. “It’s hard. It’s easy to skim the surface, but hard to go deeper.”

Gruesome Playground Injuries will run from April 1-16 at the Pacific Theatre.