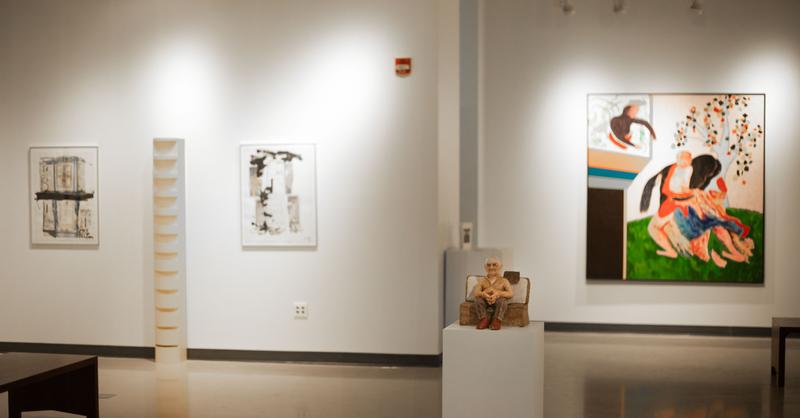 See, this pop-up exhibition focuses loosely on works from the Collection that are less often exhibited due to “condition or installation limitations.” Elizabeth Wang

Yesterday, I spent some time wandering around the Hatch Gallery’s latest pop-up exhibition: How to Unroll a Baxter&? This four-day pop-up is a ranged display of pieces from the AMS Permanent Collection, roughly gathered around a central piece: a rolled-up canvas by Ian Baxter&.

See, this pop-up exhibition focuses loosely on works from the Collection that are less often exhibited due to “condition or installation limitations.” What that really means is a broad range of things. Two of the works were vandalized in 1958 in Brock Hall. Another was vandalized in the 1970s and restored, but the restoration hasn’t aged well — let’s just say that I could guess which one it was.

But it’s not just vandalism that sets these pieces apart.

Underneath one of the paintings is a duct-taped cardboard portfolio. At first glance, it’s so well-worn and so very taped that it looks like something a student left there. But no: the name on the portfolio and the painting match. Because, likely, that’s where it’s been stored.

There’s a reason that the Baxter& canvas is still rolled up. That reason is simple and sad: we don’t know how to unroll it without damaging it.

How do the means by which we protect artwork also prevent it from being seen? How did our past efforts to conserve and collect “important” artwork damage our future capabilities to share this artwork with others?

These are all questions that How to Unroll a Baxter&? asks — but doesn’t really answer.

How could it? It’s a pop-up. It’s only here for four days.

And while I, a proponent of going and seeing art, would encourage you to go and see this art, the truth is, if you’re looking for a complete artistic experience, this exhibit isn’t the place to go.

But, if you’re looking for the beginning of hard questions, which may or may not be answered by other pop-up exhibitions from the Permanent Collection over the course of this year, How to Unroll a Baxter&? is an enjoyable—if not particularly captivating—start.

How to Unroll a Baxter&? will be shown until October 4th.