The S Project: an outline of potential 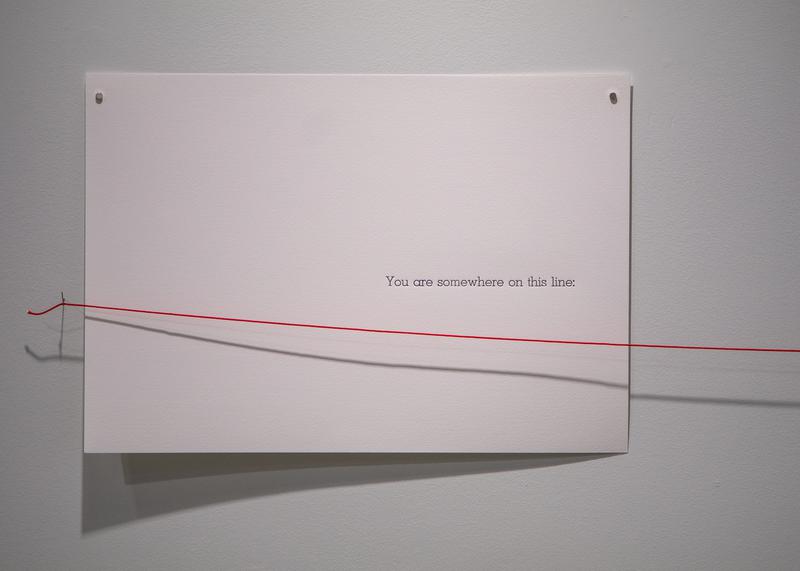 The simplest way I can describe it is virtual traveling, but with actual math. Zubair Hirji

Sure, I can read a map, but I can’t draw one. Not a rough outline of like where houses in a neighborhood are, I can do that, but a real map, a map map, with cardinal directions or topographical shading, any of that legitimate cartography stuff.

In a way, that makes me distinctly and generically unqualified to review the Hatch’s latest exhibition, The S Project.

The S Project is a collection of “artefacts, objects, and letters” illuminating a collaboration between two artists who have never met: Carly Butler (Vancouver Island, Canada) and Gudrun Filipska (The Fens, UK). Butler’s artistic practices work with concepts of nautical and celestial navigation, such as the Great Circle Route. In contrast, Filipska’s focuses on the psychology behind dissociative fugues, which is a psychological state where a person loses track of their identity and engages in unexpected wandering, with little to no memory of wandering afterwards. Filipska also explores motherhood and how being a parent challenges the colonial ideals of travel and tourism.

What this means for what the exhibit carries is rather broad. There are two clips on a video display, an MP3 with headphones, so many jars of water, photobooks, regular books, maps, red thread, a globe, an etching of Morse code, cyanotypes — photographic prints in cyan blue, the same as blueprint — more photos and even a museum case with other photos and samples.

It’s a lot to take in and it takes a while to take in.

And it takes even longer to understand what, really, The S Project is about because this exhibition does not directly discuss the actual undertaking of the project at all. (Except for in a little black binder on one of the benches, which I highly recommend taking a look through.)

While Butler and Filipska did send letters and objects back and forth, and they did make art using the landscapes of their respective homes, their main collaborative undertaking was in mapping out three potential routes between Vancouver Island and The Fens, using a variety of alternative cartographical methods. The simplest way I can describe it is virtual traveling, but with actual math.

One route focused on how the distance would be traveled via roads and shipping routes, while another allowed only travel by land, which meant detouring through Russia rather than crossing the Atlantic. The third route was charted beforehand using celestial navigation, and then, as the artists traveled as far along that route as they could, replotted with the same celestial navigation, to see how the approximated locations matched up with the actual journey.

All of these routes and the updated locations for the last route were uploaded onto a digital map, which, while not shown in the Hatch exhibition, can be found online.

However, despite the fragmented display and the lack of context for what the actual project detailed, there are still moments of genuine connection in this exhibit.

When I saw the first cyanotype — it looks like a starry sky, with a faint gradient and pops of white — and found out it was made with Vancouver Island seawater, I took a step back. It wasn’t just water that had been transported from there to here. It was water that had been transformed, purposefully, so we would look at it more closely. The artist had been there, had left an impression on this piece, and I wanted to be there too, to be let in to the places they knew.

I think this is best shown here:

In the museum case, up in the top right corner, there is a postcard sent from Filipska to Butler, alongside a small cardboard box. The box has been opened, but still carries the Canadian customs declaration, which has simply been marked “art.” You can read the postcard if you want. It’s just a postcard from one woman to another, talking about the photos she sent. It doesn’t have stunning, beautiful wordplay or detailed sketches along the sides. It’s just a postcard.

The S Project will be at the Hatch from October 15 to November 7.