Misdirected expectations but big heart in GLOVES OFF at the Hatch 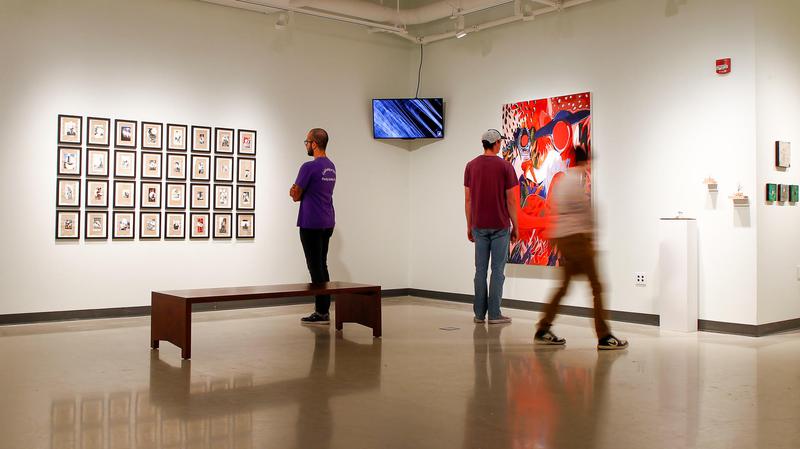 You should see Gloves Off because it is a fantastic, funky little show. Zubair Hirji

Rooms leading to other, bigger rooms, looking around to make sure I haven’t missed another painting or an informational plaque tucked in a corner. Of course, that’s not what galleries really are, physically.

Logically, it makes sense. A gallery has to be one huge space that smaller rooms are constructed in. You fold wrapping paper around a gift. The gift gives the paper a shape.

Why all these thoughts about galleries? Because of the exhibition kicking off the Hatch’s 2019/20 year: GLOVES OFF, an “experimental DIY exhibition” according to the pamphlet, focused on the work of art technicians. Art technicians, also known as preparators, are artists hired to build and move the exhibition structures in a gallery.

Now you’re probably expecting what I was expecting. An exhibit challenging preconceived notions of what a gallery space is and how we take it — and the work that goes into building it — for granted.

That is not what GLOVES OFF is. Neither is it experimental or DIY.

GLOVES OFF is an exhibition by artists who are also art technicians. This may sound less interesting, but ultimately, it’s far more meaningful.

Because art technicians work directly with galleries — and often several galleries — they are limited to where they can send their work due to conflict of interest. Simply, it’s harder for art technicians to get a gallery showing than for other artists.

It’s hard not to love something that, upon seeing people struggling, gives them simply and straightforwardly what they lack. It feels very fair when so little about the art world is fair.

There are paintings like dreamscapes with actual photos somewhere in them. There are tiny quarterback statues hung on curtain pulls. There are process videos that reveal small paintings to be layers and layers of watercolor, ink and collage. There are prose-poems over video of 3D blueprints and a huge red painting that combines Western portraiture with patterns reminiscent of women’s button-up shirts. There are so few pieces but they each contain so much.

Each of the 14 artists contributed anywhere from one to seven pieces, with no required theme for the work submitted. At points, GLOVES OFF feels like a tapestry or a collection of teaser trailers. Themes are picked up and dropped from one artist to the next, leaving you to research a particular artist more if you like their work — which is slightly difficult because there aren’t name plaques next to the work — or clear distinctions between what is work and what isn’t.

GLOVES OFF is hard to navigate — pick up a pamphlet, it’s a necessity — but even the confusing layout can’t remove the sense of looking beyond what we first assume is there. Pieces juxtapose the original sketches with the final piece or play with ideas of what a frame should be. Why do we value the art we value? Is art valuable without barriers? Is it enough for people to say, “I made something and I’m proud of it. Come and see”?

Even before I walked in, I saw two of the artists excitedly taking pictures in front of the gallery sign. I saw the same thing twice more in the actual exhibit, like the woman who pulled a friend over to her work, saying, “That’s me!”

Is that enough? I think so.

GLOVES OFF runs until September 19 in the Hatch Gallery.