Unnamed works are the strongest in DYSTOPIA 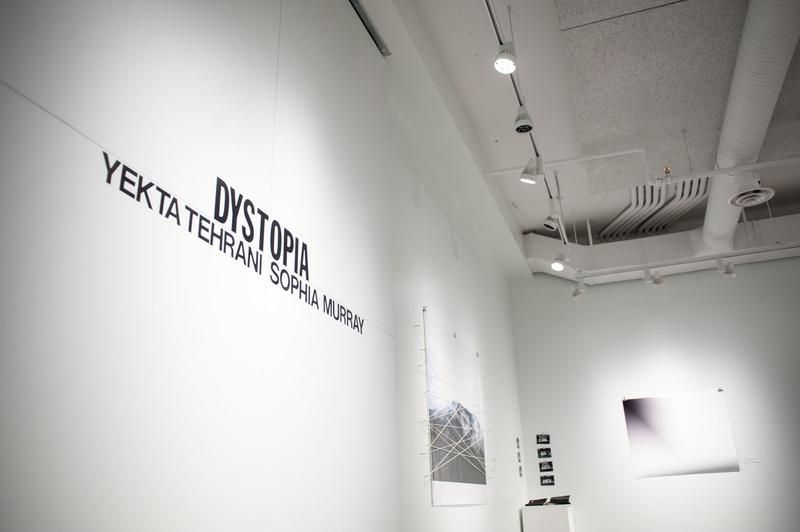 Dystopia – bringing the eerie to the Hatch.

A dystopia is normally understood as a community that is very much the opposite of a utopia. It is terrifying and eerie.

The newest exhibition at the Hatch, DYSTOPIA features the works of artists Sophia Murray and Yekta Tehrani who are current UBC undergraduate students. Tehrani is a UBC student who studies environmental design and has experience in visual arts while Murray is a visual art major with a focus in printmaking all the way into digital media.

At first glance, the art pieces leave a feeling of self-reflection and self expression. It was interesting to observe how both of the artists’ works were able to interact with each other to tell the story of DYSTOPIA or better represent the ideas of a dystopic world. A lot of the pieces are visually interesting, but a few stood out over others.

In one corner of the room, there were stacks of books that were coloured black with marker and lines of text were struck out.  Accompanying the books was a note that said, “Please look through the books," as well as pictures of people taking to the books with sharp black pens. It was jarring, but stuck to the theme of DYSTOPIA in a sense that it was not what it seemed. Generally, books are to be read and this practice of using black marker rendered reading meaningless. This piece was unnamed, but it was one of the strongest out of them all.

One of the most relevant pieces was called Self Construction and it featured Sophia Murray in multiple shots creating a final collage piece. It was distorted and broken as Murray explains that "the idea of the 'selfie' is explored as a dystopic means of self-representation. It is a structured representation of the self that is shaped by societal influences and social pressure rather than a true reflection of self.”

Another piece that stood out was painted called “Reaching,” featuring a hand reaching towards a silhouette of a face.

“The haze of the textured tones of grey envelops a stylized profile and a hand ... these blurred interactions and hazy and graphic abstractions reflect a dystopic state of being in which the perception of real is juxtaposed with illusion,” read a description next to "Reaching."

The art pieces were beautiful and abstract on their own, but many pieces were meant to be paired or interact with others in the same exhibit. Even though art is the expression of the artists, the ideas behind the dystopian theme may not have been stated well enough for the general public to understand. There seemed to be a story behind each one. Although arguably intended to remain open to interpretation, the stories were too unclear.

DYSTOPIA will be displaying at the Hatch Gallery until October 29, when there will be a closing reception for the exhibit.