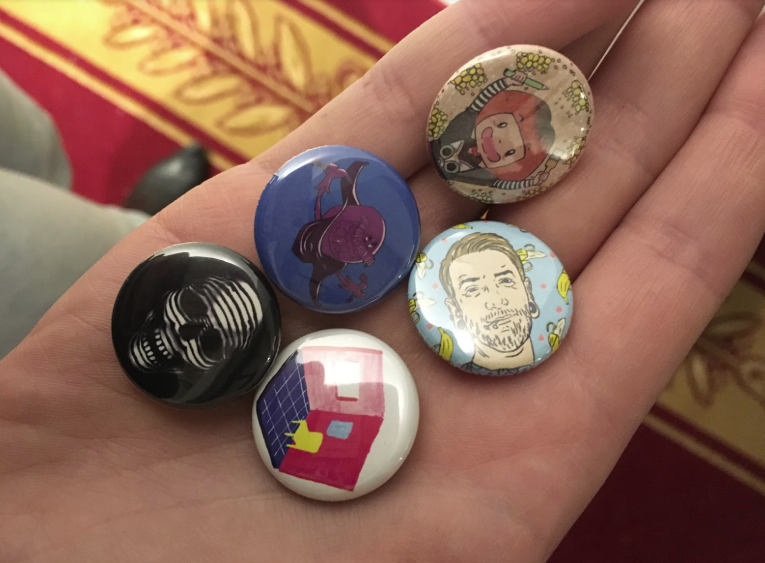 While intimidating at first, trading with others is why Hot One Inch Action thrives where traditional art shows stop short. Moira Wyton

Last Saturday night, in a warehouse just off Main Street, a red carpet rolled out onto the street. Two dogs laid at the entrance and children ran around bar tables covered in handbills for an upcoming art show titled “Boobies and Wieners.”

Against many odds, I was in the right place.

The 15th and final edition of Hot One Inch Action saw dozens of Vancouver art-lovers gather to appreciate the little things. Fifty works of art by artists from Vancouver and beyond got miniature makeovers for the event, each of them printed on one-inch buttons to be bought via a random assortment and traded by attendees.

I started my bartering adventure by pulling a bag of buttons out of a fuzzy hot pink box at the end of the gallery — at $5 per bag, it was tempting to get more than one, and many others did. I started small, but some enthusiasts with dozens of buttons for trade roamed the gallery with their wares.

While intimidating at first, trading with others is why Hot One Inch Action thrives where traditional art shows stop short. People of all ages and backgrounds — including a baby in a tiny beanie covered in pins — were eager to discuss their favourite designs and make conversation.

Strategy quickly became key when I realized I had some sought-after designs. Even still, I couldn’t resist making a bad trade so a little girl could have a banana design for her stuffed monkey. I was soon left with three buttons I loved and two I could bear to part with.

Jim Hoehnle, who co-founded the annual event in 2004 with Chris Bentzen, pointed out that buttons have become both art and accessory.

“When we first did the show, we were more angled towards where the intersection is between where the buttons fit in pop culture,” said Hoehnle.

“People like buttons, because the image is on them — it’s a really visible expression of who they are and what they care about.”

As Hot One Inch Action and its sister event, Carded!, wind down this year, they leave plenty of room for future events to learn from what has made them great — affordability, accessibility and the art of making a deal you can wear home.