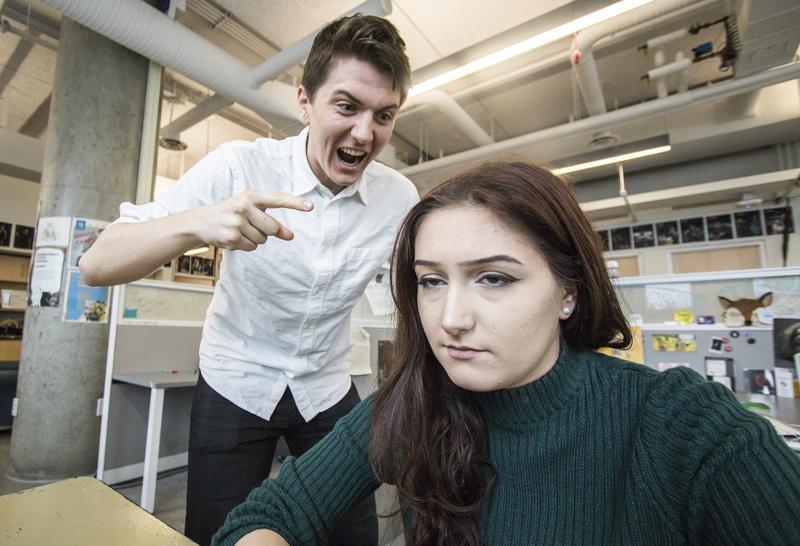 Yelling at someone you disagree with has about the same effect as yelling at nothing at all. Brandon from accounting

We are not particularly good at getting our points across. We have trouble listening to perspectives other than our own. Insults, yelling and sometimes even violence seem to be inevitabilities rather than risks. People’s differences seem to be irreconcilable and impossible to challenge.

To help you produce intelligent, informed and effective arguments when you are inevitably debating that one student in your philosophy class who thinks they know everything, The Ubyssey has put together a guide. Hopefully it will result in a little less yelling and a little more grace when we debate today’s big issues.

Whether you are giving an argumentative speech or having a fiery chat with someone after a class, it is important to keep your emotions in check.

Reid Marcus, a fifth-year philosophy major and long-time member of the UBC Debate society, explained his own personal tricks of the trade for debating and arguing.

“[Passion] is sometimes useful … say you get a topic you feel very passionate about personally. It can be helpful to tap into that … because you’re going to be more persuasive if you are talking about something you genuinely care about,” he said. “But it’s also possible to get over-invested on a specific argument that you really care about … even if you make that argument really well, you can’t always make everyone else care.”

While having a burning passion about anything is awesome, getting overwhelmed is certainly not going to help you make a better argument. In fact, it will leave you feeling emotionally exhausted and nobody will have a different viewpoint.

Take a breath, stay calm and move on to step two.

Stick to the basics

So, you’ve managed to swallow the burning rage that burns inside you when someone brings up some ultra-sensitive topic. Now what? Well, according to Marcus, a key tip for debaters of all levels is to stick to the basics.

“Above anything else, focus on making [your argument] super bare bones, don’t try and make it some grand speech … focus on your arguments. Focus on explaining … not just why it’s true, but also why it matters if it’s true.

“Stick to the basics.”

In an effort to focus on explaining your arguments clearly, it can help to take a step back so that you can better control how it’s constructed and how you are forming your thoughts.

Here, it might be helpful to take a hint from the types of tactics that philosophers use, namely logic and reasoning.

“I think if you take logic, it’s real value is in constructing a kind of model that allows you to vary things … what it does is trains you to think about setting up an argument, identify your assumptions [and] your conclusions clearly, seeing how the truth of the conclusions vary,” said Dr. Paul Bartha, head of UBC’s philosophy department.

“The other main use is reinforcing the idea that we need reason, that we can settle debates with reason and not by force or ridicule.”

While you might not always have time to prepare an argument — especially if it happens casually in line while waiting for your Blue Chip cookie — it’s best to stay grounded.

Focus on the bigger picture, reason your arguments out and please, for everyone’s sake, avoid being a jerk and avoid any kind of force. That just is not cool.

Here we get to the heart of not just how to argue well, but even how to overrule unfair tactics that primarily consist of yelling and shaking fists.

Dr. Ian Hill — an associate professor in the UBC English Department who focuses on the history and theory of rhetoric — said that successful rhetoric is all about finding common places.

“What makes successful rhetoric [is] using what I’d call the common places. The arguments that people are a custom to hearing in various contexts and will therefore seem appealing when you hear them,” said Hill.

“A good example now would be an argument to save the environment … almost everyone would agree with that. So … even if you’re not really speaking directly about the environment, you can get on an audiences good side by saying [these] things.”

This type of rhetorical theory has been used since ancient Greece, and is still just as relevant today, according to Hill.

“[Common places] goes way back into rhetorical history in its theoretical aspects,” he said. “At least back to Aristotle who advocated that we should mainly use common places, and not be too technical in … terms of words [and] content.”

“Say you are at thanksgiving dinner and you are talking to your problematic uncle. Trying to engage with that person in a ‘I’m going to prove that they are logically wrong and get them to change their mind’ [way] is not going to work out very well,” Marcus said.

“So instead what you should do — if you are having an actual conversation with somebody and you are really trying to change their mind [and] not just beat them — is you should try and find common ground in some bigger value that you both agree on.”

He then provided an example where one argued whether or not health care should be a right for everyone in a country.

“You are probably not going to get them to agree with you on the specific facts of how many people get insured and who’s going to die and that sort of thing,” said Marcus.

By finding where you and someone with a completely different political stance overlap in terms of higher moral ground, you can show that you have more in common than originally thought. If you can find this moral overlap, it becomes a little easier to see things from someone else’s perspective and maybe they might be a little more inclined to hear out the other side.

This one may be particularly hard if you have it already set in your mind that the person you are arguing with is a complete bigoted idiot who isn’t worth your time, but it is actually the most important thing to do. Marcus gave his own expertise in this area.

“If you’re just [having] a conversation with someone, you’re way more likely to convince [them] if you can make it easy for them to change their position,” he said. “If you are just shaming someone and being very combative [then] admitting they were wrong also becomes a shameful thing [to do].”

Hill also pushed that your conduct in an argument has a big impact on how effective it is.

No one likes to be wrong, especially on a topic that they feel strongly about. It’s important to be charitable and generous and encourage conversation that inspires educated thought. Being abusive in an argument may help you win in the short-run, but it does nothing but foster hate between the two sides — and in the long-run, everyone loses.

So be friendly, argue thoughtfully and even if you can’t change someone’s mind, at least both sides walk away with their dignity.