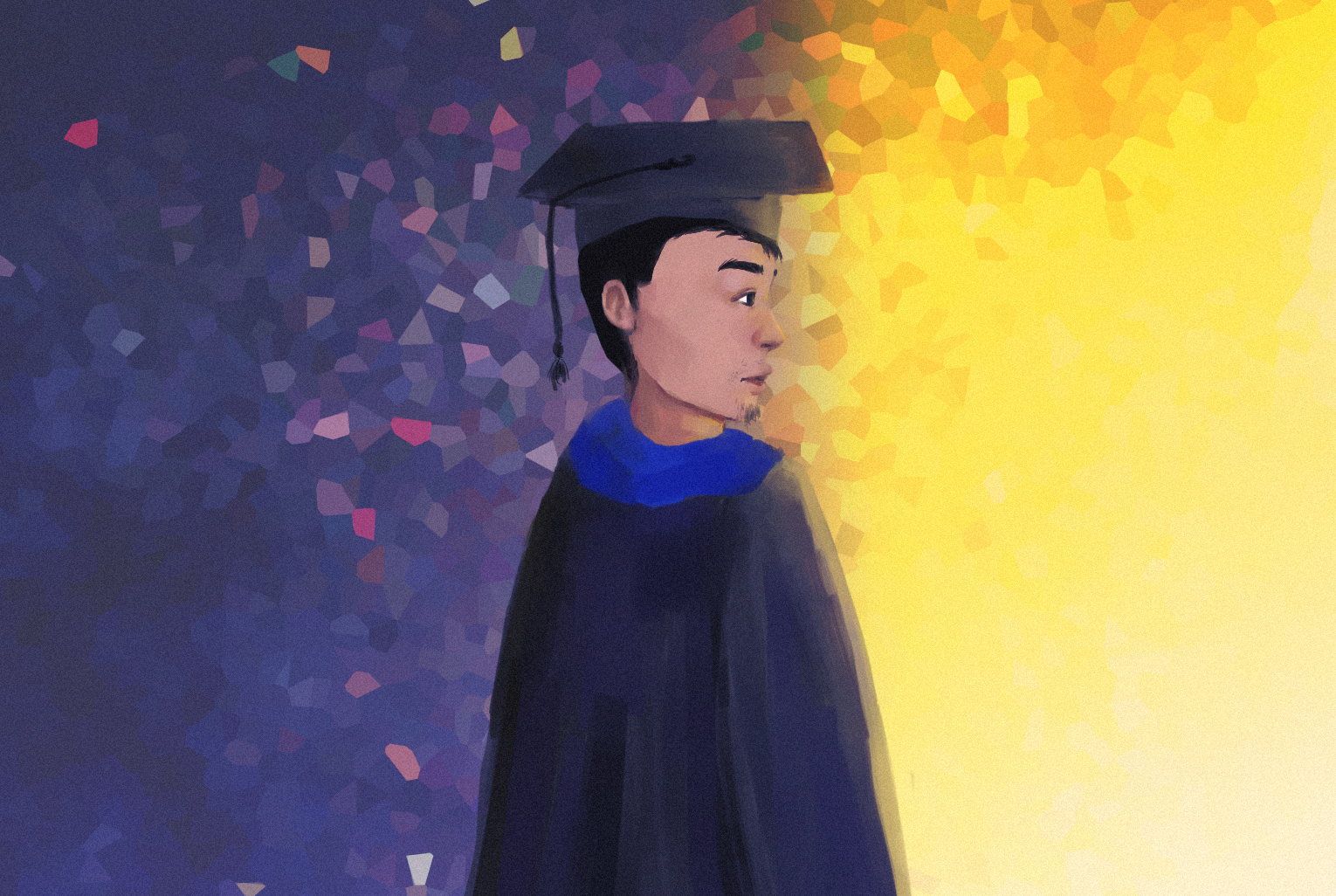 On graduating: I am Buzz Lightyear realizing he’s a toy and not a space commando

My first application to UBC was anti-climactic. I got rejected on my first go and it was only after spending a year at UVic that I was graced with an acceptance letter (pro-tip: admission as a transfer student is piss-easy). UBC wasn’t even my first choice — I had every intention of going to the University of Toronto, which admitted me around the same time. To my own surprise, I opted for the still equally good option that was UBC.

My decision’s rationale at the time consisted of three things: I loved Vancouver, I had a well-established circle of high school friends here and U of T’s enrolment bureaucracy would have forced me to study there a year longer than I desired. Ironically, I went for five years anyway, I can count the close high school friends I still have on one hand and I’m kinda fed up with this city at this point.

And in just two months, I’ll be graduating.

Looking back at how I ended up at this point, I won’t lie — it’s filled with plenty of regret and missed opportunities. If you’re in my shoes, with one foot already out in the “real world,” the phrase “what should have been” repeats in your brain like a broken record. This is especially true for an undergrad experience that turned out as monotonous as mine did.

I was more optimistic back then, of course. I think I can speak for a lot of people in that the first few years were pretty much just High School: Deluxe Edition. You and your friends still had time to dick around plenty while half-assing your way to good grades, the key difference was that you earned a blank cheque to do anything you wanted. Whether they were old or new friends, elective or required courses, job or club, starting out in a university like this was like facing the biggest buffet of interests in the world. Finally, you got to do what you loved and that can make a difference.

For a while, I chugged down that fresh undergrad Kool-Aid. I went to countless social gatherings and tried to contribute to the community as much as possible. I gunned for every single student-run company that catered to my interests, from the Film Society, to the Imagine Day team, to the hack-run gossip rag known as The Ubyssey. The best part was meeting some of the most interesting human beings along the way, whether it was during a volunteer gig or taking shots at Coppertank.

Actually, no – that wasn't the best part.

The best part was having the pleasure of calling some of them my friends. I got to engross myself with people from different walks of life, mixing and matching our unique wisdom and talents – from photography to architecture. With that, a wider window of “whatever the hell we wanna do” opened; jazz nights, conventions, potlucks, collaborations, island retreats, you name it. What excited me more was that, with this feeling of our combined talents, I got some strange sense that it was going to result in something grand by the end, something which we’d all be collectively proud of, UBC-related or not.

Then reality set in.

As 200-levels turn to 400-levels, everything fades into jaded repetition. Days and weeks start melding together and vanish in the blink of an eye. You check in, sit in a bunch of classrooms, check out. Before you know it, you become unsure if doing what you love is a worthwhile personal investment — you end up channeling more into your academic survival. And as the pressure mounts to make sure you create a good career and financial base for yourself, so to do the screw-ups, screw-jobs and screw-overs that knock you to the ground. That post-secondary magic you wanted? It never pans out.

And that’s just as an arts student. I take it that dedicated engineering majors just gouge their eyes at some point.

I started seeing a lot less companions in my life, either because schedules stopped lining up, there were other social groups to tend to, or personal conflicts got in the way. Whatever the case, no one bothers for long periods of time. The last time I got really drunk with most of my core social group intact was in 2014. I don’t blame anybody — we all have our own reasons. What was certain was that the flame of camaraderie had dissipated and the potential for something greater didn’t pan out. When that backbone of morale stopped being consistent, it surprisingly did a number on what I wanted for myself.

Then, like Buzz Lightyear realizing he’s a toy and not a space commando, it hit me.

I’m not part of the group tight-roping at The Chief every month. I’m not the girl who worked on finding four planets that NASA couldn’t. I’m not the guy who ran as a joke candidate but ended up AMS president. I’m just your average film studies bozo, with classes either extremely early or late, regurgitating 15-page essays regularly.

I didn’t become a big ripple in UBC’s ocean. I was as an ordinary shrimp, a static dot on the radar, an on-campus husk going through the motions.

This began to reflect off-campus — most of my leisure time was now spent either mashing a PS4 controller, bench-pressing in solitude at the gym or reading weird shit online. Simultaneously, the massive pre-grad existential dread started seeping into the mind: “Was this all really worth it? I could have done better.” Sometimes I wonder if going to Toronto would have given me a bigger adrenaline shot. Too late now.

Anxiety really starts setting in whenever I find out that, at this stage, my peers are landing more out-of-this-world gigs than me.

I was incredulously jealous when I discovered a peer had found the time and money to work for the Cannes Film Festival. It’s not like I was wasting my time either — I’ve done my fair share of solid jobs and good career moves that give me confidence for post-grad. But it’s one thing to be proud of all the hard work you did and it’s another thing to be proud of something you never thought in a hundred years you could do. I never truly felt the latter.

I know I’m not alone. Many graduating students go through similar dilemmas. I’ve even made a lengthy point before about how, as students, we all share similar burdens of our own. Still, that essence of blaming yourself remains and it’s not completely unwarranted. You are responsible for writing your own story — it’s up to you to pick up the pen. The problem was that at some point, I started writing shorthand.

“Seems like you just got super stuck up with yourself and missed out on a lot,” you’re thinking. Pretty much. Didn’t even get to do Storm the Wall.

“Sounds as if university overall was not worth your time whatsoever, eh?”

Gonna stop you right there, bud.

Yes, my undergrad became less remarkable than most, but every goddamned minute up to this point is something I am still grateful for.

When you come into university, you come in willing to let this vast realm of ideas, tools and other assorted meaningful thingies to rebuild yourself in ways you wouldn’t have imagined. These may not end up being what you hoped or could even tolerate, but they are one of a kind and won’t be found much elsewhere. None of these would be possible without the people who went through that exact same process willing to give you what they know now. Most of all, because they hoped to change others with each interaction – and I’m not just talking about the profs.

What I’m saying is you may not become one of the greats, but that doesn’t mean you just brood in the shadows of others' greatness. Instead, you take their fire to generate a unique light of your own, and for others to take, too. It may not have been now, but if you’ve managed to will yourself to being an undergrad for five years, you sure as hell can later.

The reason that, despite my regrets, I am still glad for my time here is that almost every waking UBC moment I’ve had has carried those lovely sparks. This feeling is not just exclusive to my comfort zone — even the moments that challenged my viewpoint or have had plain terrible viewpoints are essential. They have all contributed to picking myself back up and rethinking myself as an individual and what I mean to everything around me.

What’s amazing is that many of them aren’t the tentpole facets of this university like the high academia seminars or TED talks. More often than not, it’s the everyday moments that have made my day in ways I didn’t think possible in the least expected places, be it the Chem building or Koerner’s Pub.

Again, these wouldn’t have been possible if not for the people behind them. The fact that I fondly think of so many regardless of our relationships is a testament to that.

Dr. Ernest Mathjis, who was responsible for that unforgettable, stunning trip fest that was the Cult Cinema course.

The team of enthusiastic profs in EOSC 114 who managed to make a bunch of incomprehensible weather data feel fun.

The TAs that put up with the universal awkward silence included in every discussion group ever.

The many faces of those who make their demonstrations heard along Main Mall every year, whether regarding tuition or racial inequality.

The talented students behind the endless provocative theatre productions at Freddy Wood.

The volunteers and staff that come and go here at The Ubyssey, whether they write to make a point or write for the hell of it.

That one Sauder student I randomly met online who became my text buddy while I was in Europe for the summer. It’s not every day someone 8,000 kilometres away making you laugh almost becomes equally as memorable as visiting the Louvre or the Colosseum.

Even the complete asshats I’ve met are worth crediting just for giving me a good gauge of what not to be.

All of them have made me feel and think of my world whole new ways, big or small.

Perhaps what I’m most grateful for is those select few that have somehow stayed close to me since the beginning of my time here. I may not see them in the flesh much these days for whatever reason, but every long-delayed meet-up is always worth the wait. They’ve all been going through our own journeys as well, and there’s always a new and fascinating anecdote on with each coffee-meet or postcard. It’s also within these occasional flashes that make me realize how much I’ve blown their minds in my own way as much as they’ve blown mine. Maybe not in a legendary way, but in ways that matter.

Above all that, they are my friends — I can write an entirely separate essay on why I love them without anything to do with university experiences whatsoever.

If I always ignored the value in all of these everyday encounters, I might be in a way more sorry state than I am now. Instead, they motivated me to at least spend my last year doing things that put a smile on my face and others as well — whether going on more pub nights again, re-volunteering for exchange student orientations or messing about in Kelowna for a few days.

No, my name won’t be chiseled on the walls of student Valhalla. I didn’t squeeze every single drop of potential as a UBC student and may never will.