The inauguration of The Shadow: controversial art piece is formally recognized 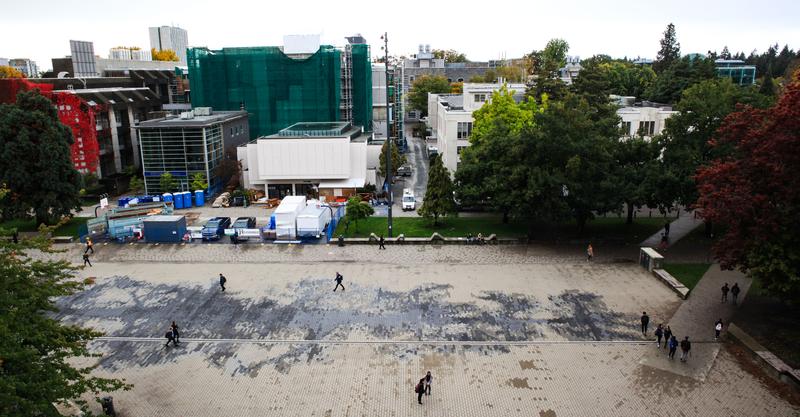 The art and the artist were regarded highly by the audience and other presenters, although very few students were in attendance. Elizabeth Wang

In November 2017, UBC began the installation of a controversial art piece ominously titled The Shadow on the University Commons Plaza near the Nest. On September 16, months after the piece’s completion, university students and staff as well as the general public were invited to partake in the inauguration of the permanent art installation.

The world-renowned artist commissioned for the project was Esther Shalev-Gerz. Shalev-Gerz grew up in Israel and now resides in Paris, and her work has been exhibited all over the world. When asked why it took so long for the inauguration ceremony to occur after The Shadow was completed, Shalev-Gerz stated that she had originally wanted the inauguration to occur in April 2017, but was cautioned that students would be writing final exams.

“I needed the spirit of all the students with me,” she said.

The installation uses paving stones in various shades of grey to depict the shadow of a Douglas fir tree which spans across the plaza. The project raised concerns in 2017 partly due to the price tag (now estimated to cost approximately $400,000), as well as for the disruption it caused on campus during construction.

The event started with an on-site flute performance composed by Ramsey Sadaka and performed by Emily Richardson, both UBC School of Music students. Although the performance was meant to take place outside, due to rain it took place in the foyer of the Robert H. Lee Alumni Centre.

“It’s something you definitely can’t turn down. It was just a wonderful collaboration, working with the people at the Belkin Art Gallery [and] my colleague Emily Richardson,” said Sadaka

The inauguration ended with a short tour of trees in the area of campus surrounding The Shadow, lead by UBC Horticulture Instructor Egan Davis.

According to Barbara Cole, curator of the Belkin Art Gallery’s outdoor art collection, the production of the event was a collaborative effort. “A lot of what we’re thinking about with outdoor art is an opportunity to start to cross-pollinate with other departments, faculties [and] areas of research on campus.”

Generally speaking, the somewhat unusual event came together successfully, despite minor setbacks such as the musical piece having to take place inside, there being no seating and there being no microphones or audio equipment for the reception. With that said, the art and the artist were regarded highly by the audience and other presenters, although very few students were in attendance.