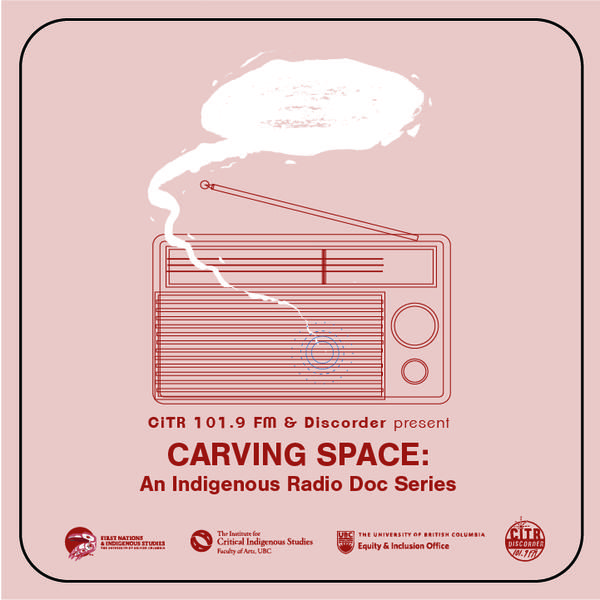 Myia Antone and Sage Broomfield, members of the Indigenous Leadership Collective (ILC) at UBC are two of the documentarians who took part in the Carving Space series. Working with other students involved in the ILC, they curated a round table discussion about Indigenous student life which was then turned into a podcast entitled “Navigating Indigenous Identity at UBC.”

“The podcast itself was really gravitated [on] how we hang out and talk to each other. We found it was really amazing because as Indigenous students, we all kind of came together and started having these conversations that we had never really had before and never thought about, but we felt it was a really safe space to talk about [things],” Broomfield explained.

“I think we went [into the documentary] with an idea of what we wanted to portray, but I think we really did want to emulate how natural and organic these conversations were. … The kind of conversations that we have and you see about Indigenous identity … within a classroom, it's very political. No one feels comfortable to say the things that they're really thinking or that they've been struggling with. It was so refreshing to just have this like completely natural environment to just talk about these things,” Antone added.

Another student who produced a documentary for Carving Space is Chloe Price, who focused her narrative around the steps being taken within Indigenous healthcare in her podcast called “Wellness Reclaimed.”

“They call it two-eyed seeing,” Price explained, “or providing the best of both worlds to their patients because they want to afford them all the benefits of Western healthcare but also ... provide them with care that resonates with their history and their background and their roots.”

Price, who worked in healthcare for a brief period and who has familial connections to the industry said that her knowledge drove her to create the documentary. “I've been aware of ... these new frontiers of mental health care for awhile. But I was also aware that I was only aware of them because of my internal connections, not because I’ve seen articles about them online. I wanted to focus on that more and give a new platform to these really interesting developments.”

“It was that public consciousness that paired with my own interest [in mental health] that made me choose the topic.”

Price also explained that using a podcast as the medium to tell this story worked for a variety of reasons.

“There's this really strong oral tradition in First Nations communities, and that's how stories were passed down. So thematically, it's nice to tie into that. But also realistically ... podcasts are having this massive comeback in terms of popularity. So you're reaching younger demographics, you're reaching a broader audience.”

In terms of the series’ production, Rach Lau and Autumn Schnell worked to co-produce Carving Space, alongside the creation of their own individual documentaries.

While Lau attributed the work of cultural competencies to Schnell, they took on the technical aspects of the series and assisted the documentarians in editing and mixing their audio, as well as in creating a flow in their podcasts.

“You need to get your head inside of their story and what they want to do and then be able to orient yourself in such a way that you can provide feedback and support for them to tell interesting stories that are both culturally sensitive as well as unique and relevant and nuanced,” Lau explained.

Lau’s two-part documentary “Rhyme and Resilience,” follows Indigenous poets and their use of poetry as a form of expression. “I hope that people can see the potency of poetry as a medium, as a vessel, as a tool for resistance and also ... the ways in which that is utilized and mobilized within Indigenous communities or by Indigenous peoples.”

Schnell focused on the topic feminism within an Indigenous context in "Indigenous Feminisms", and centred her work around two Indigenous feminist scholars. "It more explorative than having a full beginning, middle and end, it wasn’t super narrative. … I kind of used it to figure out what Indigenous feminism meant to me and how other people are leading the way in it.”

“Feminism has lots of different facets and so does indigeneity and this is just an intersection of two perspectives.”

While each one of these radio docs has different perspectives of indigenity at the core, Lau explained that its name, Carving Space, encompasses the deeper theme of the series.

“I think the title says it all. ... It's [about] the different ways in which Indigenous folks are making space for themselves. Whether it's Indigenous students at UBC making space for themselves through the Indigenous Leadership Collective or ... Autumn talking about carving out space ... to talk about these very specific colonial aspects of feminism. With my documentary, it’s about how are we carve space within poetry and within creative circles and communities to talk about some of these things that pertain to the one's identity and one's personal histories. And with Chloe Price's documentary ... it's [about] how are we are carving space within the institution of healthcare and mental healthcare to have something that is culturally specific and relevant and effective. So it's all about making that space for oneself and for one's communities.”

Schnell echoed these sentiments, adding, “I hope that [people] … really thoroughly listen to them and the perspectives that they're offering.”