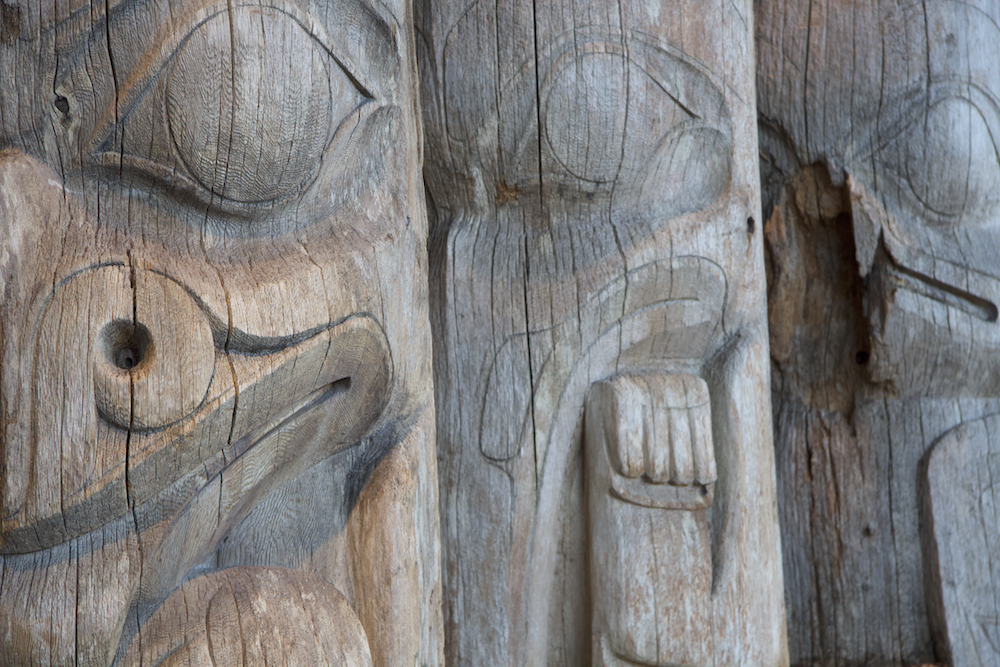 “We have had a number of communities who have said to us ‘We will be coming to you for our belongings, when we're ready.”

While museum efforts in British Columbia were previously focused on collecting Indigenous objects for display, many museums now have a new mandate: giving them back.

The act of returning something to its original home or owner is called repatriation. This process, which is often financially and emotionally complex, has been a priority for the Museum of Anthropology (MOA) and UBC’s Lab of Archaeology (LOA) for almost 30 years.

In 1990, the United States passed a piece of legislation called the Native American Graves Protection and Repatriation Act (NAGPRA), which effectively changed the landscape for how museums and other institutions consider the Indigenous collections in their possession. The act requires any institution that receives federal funding to document what is held in collections and provide this information to Indigenous communities. These communities can then request repatriation of any objects of great cultural significance.

“There was a real fear when NAGPRA came into effect that museums would be cleared out,” said Dr. Sue Rowley, curator of public archaeology at MOA and a LOA committee member. “In fact, what museums have found is that that isn’t the case — and they’ve also all of a sudden established relationships with communities that have opened up [possibilities] they had never imagined before.”

“[Repatriation] just comes about naturally when you’re working with communities,” echoed Dr. Sharon Fortney, UBC alumna and curator of Indigenous collections and engagement at the Museum of Vancouver (MOV).

It was actually one of Fortney's PhD advisors, Anthropology Professor Bruce Miller, who started the repatriation program at the MOV 11 years ago.

Rowley, Fortney and Miller have all seen massive shifts to favour this work over the past 20 years. Just last year, the British Columbia provincial government created a repatriation grant fund, with a total of $500,000 available for grants through the Royal BC Museum.

“That’s a game changer,” said Rowley, “because that will help a lot with bringing home ancestors and bringing home belongings from institutions.”

Fortney argued that now is the time for museums to start thinking about these bigger questions of belonging.

“Times have changed,” she said. “Things came into the museum in a way we wouldn’t accept today and so it gives you a chance to re-examine the collection and the reasons behind, ‘Why is this here?’” 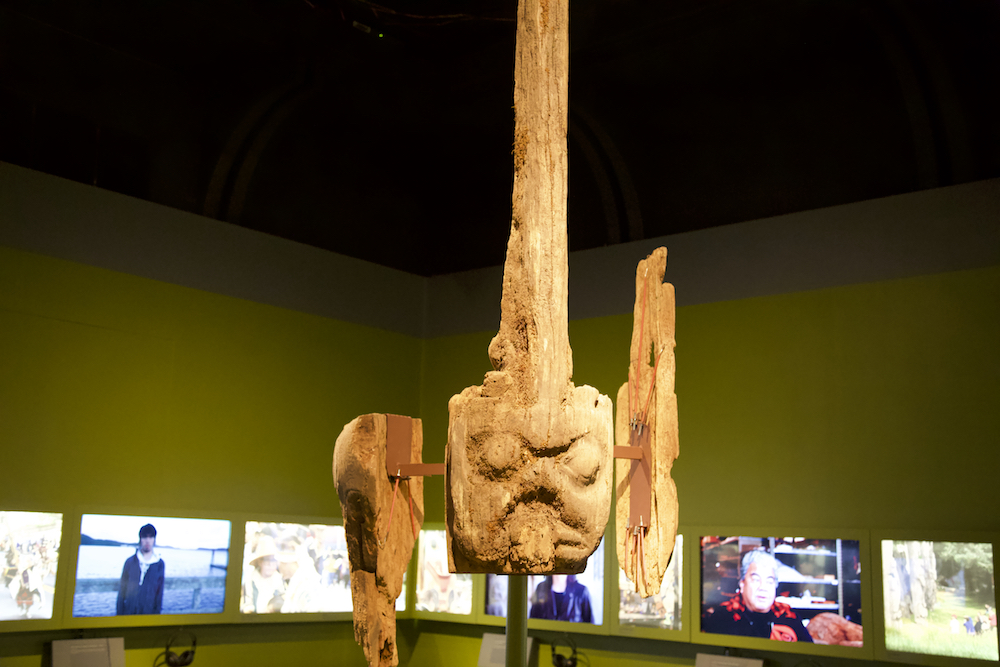 Pole fragments at the MOV exhibit “Haida Now,” which have been identified for repatriation. Collins Maina

“This is the idea of helping communities to become whole again [by] bringing the ancestors back to the land where they were laid to rest and where they belong,” explained Rowley.

The most recent example of a major ancestral repatriation occurred back in August, when LOA partnered with Stó:lō and Yale First Nations to return ancestors from a part of their shared territory.

“That was really lovely because it was the coming together of two communities working together to bring those ancestors home,” Rowley said.

Outside of the baseline care that is taken during this process, LOA is also able to offer more academic services, using the knowledge and equipment that is available within the lab. With non-destructive analysis, bio-anthropologists like Dr. Darlene Weston may be able to provide community members with information about the age, height, sex and even potential long-term disabilities of the ancestors whose remains are coming home.

“[The Stó:lō] had a relationship with Weston, and a spiritual person from the community sat with her while she took the samples so that they knew that it was done in a good way,” said Rowley.

Weston was able to answer questions that the community had about these remains and provide them with additional information for their community histories. Through the use of destructive analysis, which involves destroying a fragment of the bone, archaeologists are able to provide details about diet and nutrition.

The repatriation timeline can vary depending on a number of factors — both internal to the university and externally within the Indigenous communities.

Repatriation from MOA falls under UBC’s Policy 128, which sets out “the circumstances, conditions and protocol for disposing of works in the Morris and Helen Belkin Art Gallery, the University Library, and the Museum of Anthropology.” MOA’s process would generally begin with an individual, family or community contacting them about the object or objects in question.

Depending on the circumstance, some people may feel as if their belongings are doing valuable work for them in a museum by showcasing their community to the world. Miller said that museum resources may also provide value with access to preservation specialists, which could add an incentive to keep the objects in the care of institutions.

Once an object has been requested for return, the museum’s repatriation committee has to ask itself the hard questions about the piece’s history.

If the history is murky — if information about how exactly the piece was acquired is not fully known — that would extend the committee’s investigation.

“It [can] involve a lot of archival work to find out where things are from, how they got there [and] what the provenance is,” Miller explained. “Sometimes it takes a lot of sleuthing and detective work.”

Once the committee agrees to support a repatriation, it must be approved by the administrative side of MOA before moving onto the university level. At this point, the piece is appraised to find its monetary value. Depending on the value, the decision may be lifted to the Provost’s office and potentially even the Board of Governors.

In institutions like the MOV, the collections technically belong to Vancouver and thus approval must come from the city.

“The city lawyers would say things like, 'Well, why do you want to give things back?’” said Miller. “But they don’t belong with us and they do have a place where they originated from.”

Miller stressed that museums have an inherent responsibility to work with communities and return things to their rightful homes.

Haida Mortuary Pole from SGang Gwaay (MOA A50017), circa 1901 Board of Governors

According to the annual end-of-year reports from the Board of Governors, Policy 128 has not been put into effect to repatriate anything from MOA for the past 10 years. That will change this year.

In June, a request was forwarded to the Board on the recommendation of President Santa Ono that a Haida Mortuary Pole be repatriated to the Haida Nation.

“The pole was exhibited on University Boulevard in 1958 as part of UBC’s celebration of the centenary of the British Columbia becoming a crown colony,” the Board report states. “When the current museum building opened in 1976, this pole was on display in the Great Hall.”

In 2003, the Haida Repatriation Committee informed MOA that it would be seeking to repatriate the pole in the future and requested that MOA remove the pole from public view in 2009.

Haida Mortuary Pole from SGang Gwaay (MOA A50017), circa 2001 Board of Governors

“[It’s] a Haida mortuary pole, which means that ... it was erected in order for someone to be buried in it. It was someone’s grave,” Rowley said.

Details of this pole's return are currently being worked out by the Haida Repatriation Committee and more information will be available come 2019. Until the time of its removal, MOA is safeguarding the pole.

The MOV is also accustomed to the workflow of repatriating Haida belongings, as it is currently going through a similar repatriation process with the nation.

“The Haida have a strong history of repatriation work,” Fortney said. “They have [a] process that they are working with.”

“We’ll be here” when they are ready

Outside of this particular instance, MOA is prepared for more communities to come forward with requests in the future.

“We have had a number of communities who have said to us, ‘We will be coming to you for our belongings, when we’re ready,’” Rowley said. “It’s a lot of hard work to bring the ancestors home and to bring belongings back.”

“We are in the era of repatriation,” said Miller. “And it’s a really deep part of reconciliation. … There are many versions of reconciliation, to me this is one of the most significant. This is where the communities really take control of their material culture and of their ancestors.”

Whatever the time frame looks like, the end result is always worthy of celebration.

“Repatriation is not something that has an end date, or an expiry date. It’s an ongoing process and the response that we always say is, ‘We’ll be here,’” said Rowley.

“We did a repatriation of an ancestor from Klahoose, which is where my grandmother is from — it was very moving for me,” said Fortney. “I think you’re just happy for the community when it happens. When people come in and things are going home.”

— With files from Collins Maina