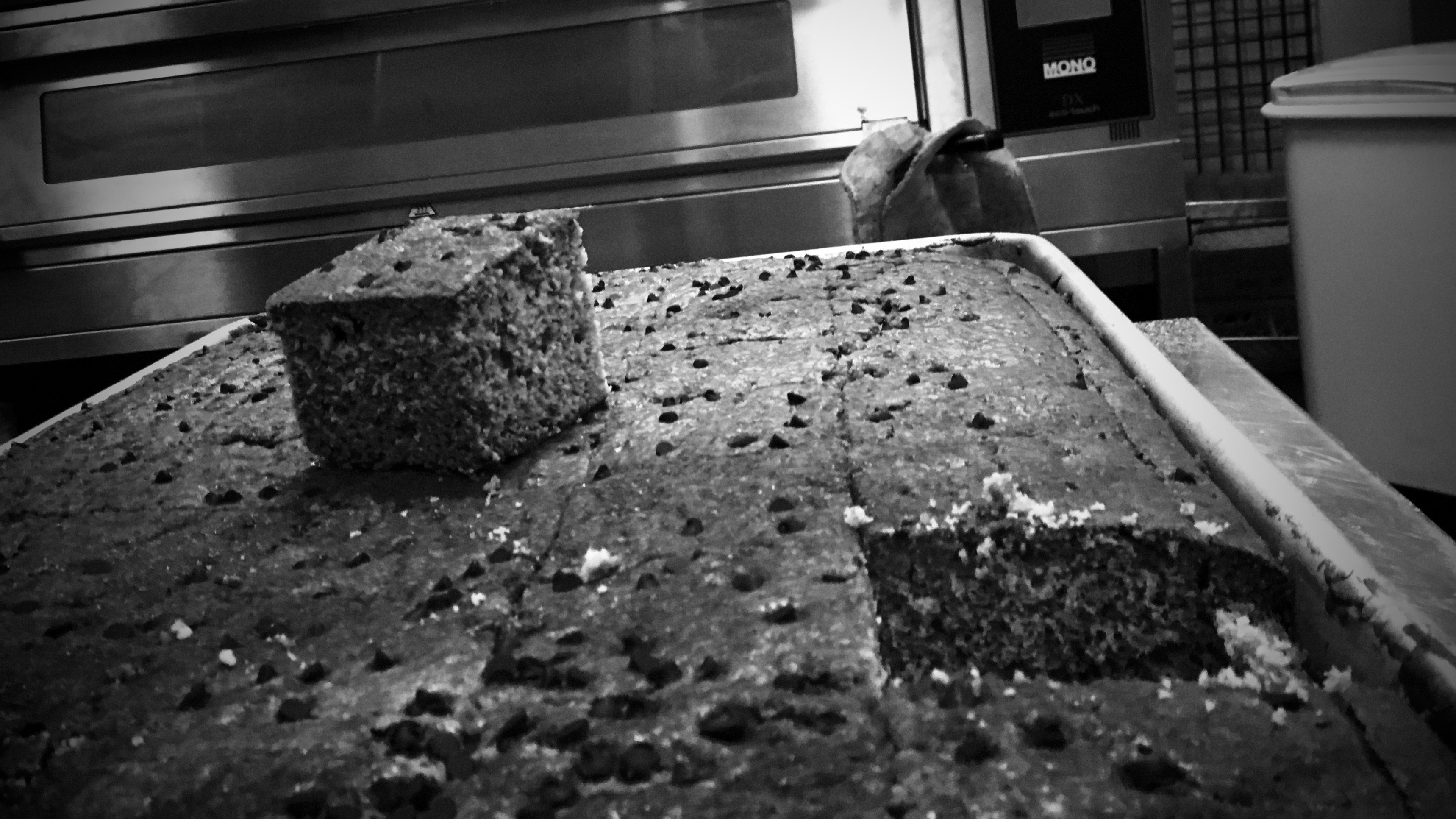 Ponderosa Cake: you see it at the pool, at Ike’s cafe, when you’re watching the news in the law building. Maybe you saw someone eating it once in your SOCI 100 lecture. It’s brown... maybe? Actually, more of a speckled grey. Wait, no... yeah, it’s brown. It’s like a lump of nourishment, but with few identifiable features. The smell of cinnamon comes to mind when you think about it — cinnamon and your failed WRDS 150 midterm. Maybe you ate a slice once on a coffee date with your BIOL crush or crying into your final paper.

There’s also a good chance that you have no idea what I’m talking about.

Ponderosa Cake is a coffee-cake-type loaf sold by UBC Food Services. Firmly swaddled in plastic wrap and heavy enough to balance out a smallish textbook, the smattering of chocolate chips on top add to the promise of enjoyable carb-loading. One serving can help you power through the longest study session, the worst hangover or the lowest budget day of the month.

I first heard legends of Ponderosa Cake when I was young. My mother would regale me with stories about her youthful academic menu of Cinnamon Buns, the Bus Stop diner and the awe-inspiring Ponderosa Cake. Her tales of wolfing down large hunks of cake while running from one end of campus to another grew in my mind. When I came to UBC, I was excited to establish my own cake-lore, even share my excitement of the under-appreciated food in an article chronicling its history and culture. The UBC Cinnamon Bun having long been exalted, I thought it was Ponderosa Cake’s chance to shine.

It was supposed to be a quick and easy puff piece. I was so wrong.

A quick Google search shows 367,000 results for “Ponderosa Cake.” Duncan Hines, the Vancouver School Board and “Mennonite Girls Can Cook” all have recipes for the cake but no explanation of the cake’s history. By the time I reached the 18th page in Google, seen only countless Insta-pics and read quirky blog posts, I knew something was up.

The internet had failed me — I needed to try actual research.

I trekked to the IKB basement and asked the university’s archivists if they had any information on Ponderosa Cake. Their blank faces should have been a clue.

“Search The Ubyssey’s archives,” they said in unison. “Or maybe the alumni magazine.”

The ink from flipping through decades of Ubyssey papers still stains my fingers from the cake-less search. “This newspaper is 100 years old and doesn’t have any information on an internet famous cake?” I thought to myself. A creeping suspicion was starting to come across my brain, but I didn’t want to admit it. The more I worried, the more I needed to know: Ponderosa Cake is real, right?

My next method of research involved searching the open collection of UBC publications. The database searches through all of the university’s digitized publications since 1915. This has to be it, I thought.

The database came up with 11 pitiful results: one reference described the food at a celebration; two advertisements for UBC Food Services’ cafes mentioned it; the same story of an alumni’s memories is quoted twice; there are two references in an ad for the same UBC Food Services’ cookbook and it was used in both the university’s 2007/08 and 2008/09 calendars to describe food on campus.

It felt like there should have been more, and a fear was starting to set in that I was never going to find the origin story — the roots and reach of Ponderosa cake in its decades at UBC.

A cookbook! I thought — often they have little anecdotes on their recipes. If I could find the cookbook, I could find the history. I tracked down a single copy of Treats to Remember, a collection of recipes from UBC kitchens, at the central branch of the Vancouver Public Library. When I discovered the small green book, I first found a long paragraph on the history of the UBC Cinnamon Bun and how much it had meant to the students. The thorough story gave me hope for the Ponderosa Cake. Finally, I’ll know. I flipped the page.

“Ponderosa Cake is a cake loved by all students. Here’s how to make it in your own home.”

As my cake-filled world came crashing down around me, the fire alarm went off on the floor of the library that I was on. Everyone was evacuated and fire trucks came blaring. Five minutes later, standing outside in the rain, I realized that I had just walked out with a book from the library without checking it out.

I thought that I had come to a dead end, but I had one more lead to follow.

I went straight to the source: Leith Blachford, director of marketing and communications for Student Housing and Hospitality Services. My request was simple: “Do you have any information on the history of Ponderosa Cake or know someone who might?”

The response was swift: “[There] doesn’t seem to be much of a story behind it.”

They quoted the executive culinary director, “[Ponderosa cake] is actually just banana bread with chocolate chips ... Perhaps there is more merit in looking forward than backwards.”

My correspondent urged me to switch gears and write about the Food Services’ new banana bread.

My suspicion had been confirmed; UBC Food Services was trying to kill off Ponderosa Cake. Not only did the cake have no past, it seems it wasn’t going to have a future, either!

The facility where Ponderosa Cake is known to be produced. Angela O'Donnell

An interview was arranged — this time with Andy Chan, the executive sous-chef of UBC Food Services. The cafeteria at Orchard Commons was buzzing with excited first-year students on my walk through to the commissary kitchen. When Chan came out of a meeting, we went to a back corner of the Orchard dining hall.

I started the interview off simply, “What is Ponderosa Cake?”

I asked Chan about Food Services’ plans to replace Ponderosa Cake with a new banana bread.

Chan said, “[We’ve] got this new food vision so we try to be more healthy.” He told me about how they had tried to change the recipe for the granola bar, but students had complained and they changed it back.

“So as of right now, we are not switching anything.”

When asked if they were trying to swap the banana bread for Ponderosa Cake, Chan told me, “We won’t phase it out right now.”

Finally, I asked if they had ever discussed getting phasing it out. Chan gave me a simple no.

I then asked about the cake’s history. I learned that Ponderosa Cake was invented in the 1960s, and that it was named after the bakeshop in the old Ponderosa building. The cake is made of all the old bananas that can’t get sold in dining halls and cafes because they are no longer attractive. The recipe has stayed the same for the 60 years the cake has existed, and the most authentic recipe is the one in the Treats to Remember cookbook.

It’s still popular with older students but not so much with younger ones. Chan attributed this to the fact that “there’s more options now” — students have more choice on what to snack on. It sells out almost everyday at the cafes around campus so they rarely have to throw away extras. He also told me that he once heard a story that a student saw the cake being sold in Japan.

I was heartened to hear that Ponderosa Cake still has a following. It sells out every day! People still eat it! It’s international now!

After the interview, I had a tour of the kitchen and saw where the cake was still being made. I saw the giant bin of cinnamon sugar that they use for both the Cinnamon Buns and the Ponderosa Cake. I saw the deep pans that they bake the cake in and a fresh cake in its calorie-full glory. Chan left me in the bakeshop as he looked up some numbers for me and I saw the Food Services employees icing all the Valentines cookies for the campus and stretching the dough for the Cinnamon Buns. Any animosity I had held for the UBC Food Services for trying to take my cake away from me evaporated in the sugar-laden air. Chan returned to tell me me exactly how many Ponderosa Cakes they had sold last year — 17,484 — and led me out of the kitchen.

Just as I was leaving, Chan stopped in front of the cold kitchen. He told me that they actually had discussed phasing out the Ponderosa Cake.

“Before, we were discussing we should make something healthier... We talked and never took action.”

I asked when this discussion happened.

“Like, last year ... when were thinking of the vision,” he said.

He also said they didn’t make the change because they didn’t know how the students would react, but assured me that they “don’t want to make the switch right now.”

When I asked if they might discuss it in the future he told me, “there will be future talks,” but there would be a student-based survey if it happened.

The sun was shining when I walked out of Orchard commons, but a stiff breeze had started up. I had gotten the grim answer I expected. The cake’s fate is still in jeopardy. I would just have to wait and see what the future would hold for the mysterious Ponderosa Cake.