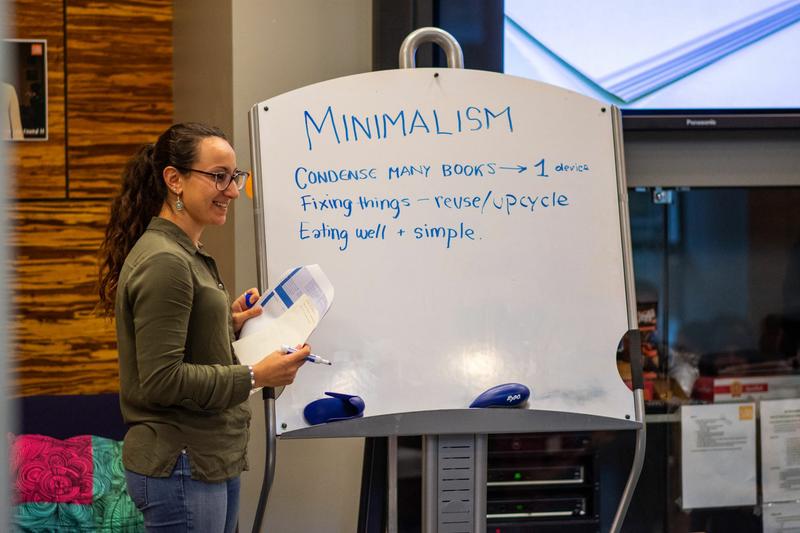 The speakers explained that if you fill your lifestyle with things that help you fulfill your purpose, it will be sustainable. Courtesy UBC Global Lounge

The Global Lounge’s first Global Café of the year was organized by UBC’s Jewish Students’ Association (JSA) and the Thaqalayn Muslim Association (TMA).

Together, the clubs spoke about the minimalism movement, incorporating different perspectives than those normally portrayed in popular media.

Minimalism, the groups argued, is not about throwing away all material things or constraining oneself to survive only on bread and water. Instead, the coordinators of the event stressed that minimalism is a modest lifestyle consisting of little, daily efforts to be efficient and mindful, working to find “blessings in disguise,” as TMA member Ashan Ali explained.

Through various activities, the attendees learned about the concepts that contribute to a minimalist mindset. In the segment “Talk less, talk more” we tried answering a question in a full minute response, then answering another in just five words. The task encouraged participants to reflect on the carefulness with which we act when we know words are finite in the portrayal of an idea. The goal here was to become more mindful of what we say.

There are no specific guidelines to engaging in the practice, but JSA member Mikaela Frame explained there are concepts in Judaism which help us to better understand minimalist principles.

The event’s general message was that everyone can benefit from minimalism by choosing to practice mindfulness, self-value and purpose.

One can understand self-value like this: when object or idea A exists for B’s purpose, A is then an extension of B, hence becoming a part of B’s value. By applying A in a way that satisfies the purpose of B (yourself), one can make this relation sustainable by directing its work towards the soul rather than towards external, finite means (such as status). We each have our own purpose, and the value of an object is relative to ourselves.

The speakers explained that if you fill your lifestyle with things that help you fulfill your purpose, it will be sustainable.

Frame stated that despite doubts, the minimalist lifestyle can be attainable in our society “if people understand there are no defined rules.” Frame was first drawn to this topic for its environmental component, but given the sudden trendiness of minimalism she advised that beginners do one thing at a time.

“Being conscious is a good way to start,” she said.

Ali added the importance of giving back to others and the emphasis that his faith gives to sacrifice towards others, although “you can [also] help others by helping yourself.”