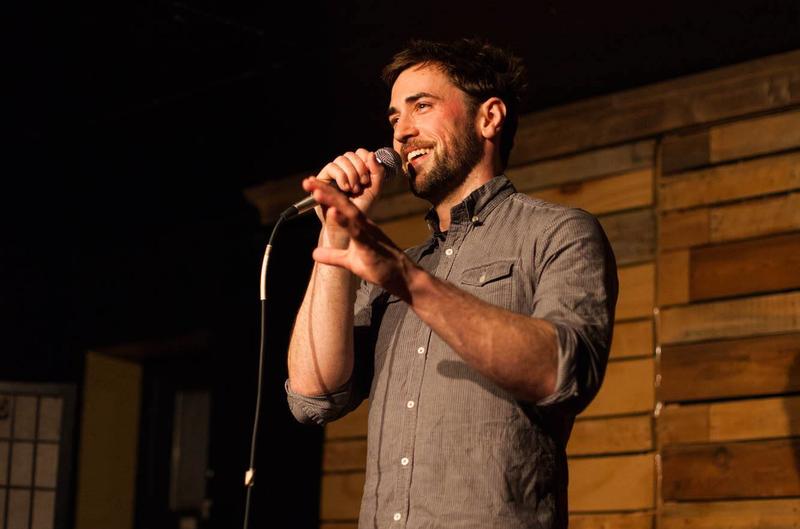 Tucked away off of Main and King Ed, Little Mountain Gallery is unassuming. If it weren’t for the sandwich board proclaiming “Jokes Please! $5! Tonight!” you’d never have guessed it was there. From the outside, the venue seems to almost blends right into the wall.

Inside, the space is fairly small, as unassuming in decor as the outside – but much livelier. As you enter you’ll see the front counter where you can pay your $5 cover and order a drink from the “bar,” which is really just a cooler full of beer behind the counter. Some of the comedians from the show are likely hanging out on the couch by the door. The comedy scene at Little Mountain tends to be quite close-knit, a microcosm of the Vancouver comedy scene as a whole.

To get to your seat, you’ll walk from the front area into the recently renovated main room. What used to be a de facto warehouse space (painted black with a few chairs thrown in) has recently been transformed into a lovely wood-lined theater with multiple levels and a raised stage. This set-up is recent enough that the room still smells like fresh wood, and though it’s far from fancy – folding chairs make up the seating area and the ground is slightly grimy warehouse cement – it’s the perfect atmosphere for this kind of show.

Ten minutes before the show starts, the room is almost entirely full. Heavy electronic music bumps from the speakers, blending with the loud, animated conversation. It’s a mixed crowd, from young couples on date night to older professionals, to large groups of university-aged friends to elderly married couples.

Right on time at 9 pm, the house lights dim, a bright stage light turns on, Arcade Fire fades out, and Jokes Please! host Ross Dauk comes on. He started the show in 2013 and has hosted it since, at times working with other comedians and other times going it alone. “I like jokes, and I’m a pretty polite person…That’s why I named it Jokes Please,” said Dauk in his introduction. “The jokes [come] first but also, there’s some politeness.”

His fifteen-minute opening set covered weird men on electric scooters, bad haircuts, and life in Mt. Pleasant, and the crowd loved it. There’s some back and forth between Dauk and the audience: “What did you guys think of The Shape of Water?” he asked, to which a woman in the back row replied, “She f*cked a fish!”

“She sure did,” he agreed, laughing along. The show creates a sense of camaraderie between the audience and the comedians. This mutual respect between adds to the friendly atmosphere of both the venue and Jokes Please! in particular.

The almost two-hour line-up of comedians was as diverse as the audience. Some of the performers included UBC-alum Maddy Kelly, the youngest comedian on the roster; Byron Bertram, who recently appeared in season 2 of Dirk Gently’s Holistic Detective Agency and has been in comedy for 35 years; Kathleen McGee, who has headlined at Just For Laughs and whose tiny dog Eugene roamed the audience during her set; and Yumi Nagashima, a Japanese comedian who performs internationally and also acts and models.

Each comedian’s set was about ten minutes, and topics ranged from drunk experiences with racist Irishmen, to premature male pattern baldness, to cute gay anime shows, to the ever-present subject of “life in Vancouver and how expensive it is” that local comedians can never get enough of – more than one performer had a bit about how they will soon be moving out of the city. (With the largely millennial audience, these segments always land.) With such a wide range of performers, almost anybody will find some part of the show hilarious.

Dauk was happy to answer questions and talk about the show. “Bars’ first priority are to sell drinks, but here, comedy is the first priority,” he said. Because of the low entry price, it’s an accessible entertainment option for audiences, and because of the smaller crowd size, it’s a low-pressure place for comedians to get comfortable and try out new material. “I [want] it to feel welcoming for the audience and for the comedians,” he said.

In this, Dauk has succeeded. Though the line-up at Jokes Please! changes every week and you never know just what you’re going to get, you can be sure of three things: a friendly host, a pleasant venue and cheap beer.